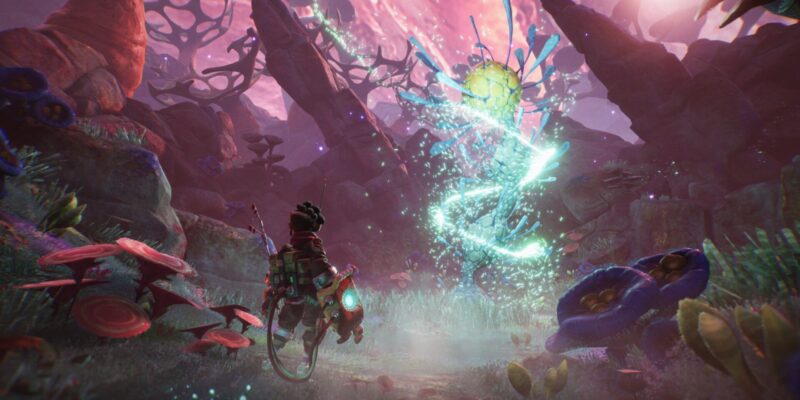 Now that gamescom 2021 has officially begun, gaming enthusiasts everywhere will get to enjoy yet another tidal wave of announcements and trailers for the remainder of the week. Having said that, considering the sheer amount of streams and reveals that Microsoft has shown in recent months, today’s Xbox stream did not contain much information on games that Microsoft hadn’t already shown before. At the very least, the stream did feature a new trailer for The Gunk, an upcoming action-adventure game announced last year that definitely stood out as one of the more unique titles out of the ones shown.

This new gameplay trailer only lasts around a minute, but it nonetheless leaves an impression thanks to its relaxing nature and visual splendor. It depicts the space traveler protagonist roaming through an alien planet while sucking up all of the titular gunk scattered around the landscape. Areas appear to start dark and grimy, but as the protagonist cleans up more of the land, the areas begin to burst with color and vibrancy. Although the trailer largely remains devoid of combat, it features a few monsters big and small that the protagonist has to deal with.

According to the website of publisher Thunderful, The Gunk stars two space travelers who start off down on their luck until they come across “an untouched planet brimming with life.” As they scrounge for resources, “they realize that they must save the planet from the curse of a corruptive gunk parasite” and attempt to avoid “a spiral of festering mistrust” along the way.

Although plenty of other games have explored the premise of cleaning up a polluted world, they usually never fail to instill a satisfying sense of progression. Going off this new trailer, The Gunk will likely prove no different in this regard. The aforementioned website indicates that players should expect to find The Gunk on Windows PC sometime this fall.

Wield fists of magical fury in Into the Pit, a Doom looking roguelike

New Sea of Thieves event starts today, with Borderlands-themed ship as a reward of sorts