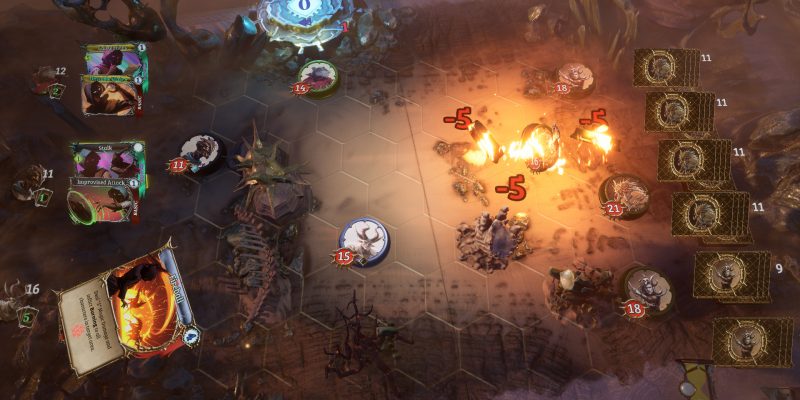 Trials of Fire is a turn-based role-playing game that combines card battling, deck building, and traditional strategy gameplay. The game is under development by the new studio Whatboy Games, which has some serious talent behind it. Trials of Fire is being directed by the lead gameplay programmer of Batman: Arkham Knight, Batman: Arkham City, and Batman: Arkham Asylum. The studio co-founder and director is another former Rocksteady developer, Dax Ginn. As of today we now have a Trials of Fire release date of April 9, as well as a new trailer.

Trials of Fire takes place in a post-apocalyptic fantasy realm called Ashe. Some sort of apocalyptic event has left the world of Ashe a shell of what it once was. The wastelands are full of danger, and what few survivors are left are huddled into settlements to try and avoid the threats beyond their walls. Players take a group of three random heroes on their journey, adding some rogue-lite elements to the mix. You fight enemies on a hex-based map, and must use the cards in a deck, as well as strategic positioning, to maximize your party’s effectiveness in battle.

Every run through the barren fields of Ashe will be different. You can build your party with any of nine different classes, 200 distinct items, and 320 Skill Cards. There will also be six different modes to tackle, including story, survival, and even quick one-off combat encounters. Trials of Fire has already been in Steam Early Access for a couple of years now, and Dax says that the developer has used this time to flesh out the full content plan for the game. Whatboy is also forming a community around it, using the feedback to help improve the game overall.

This is Whatboy Games’ first title, and it already shows promise combining two unique styles of gameplay together. The Trials of Fire release date is April 9 on Steam and you can check it out on its store page right now.