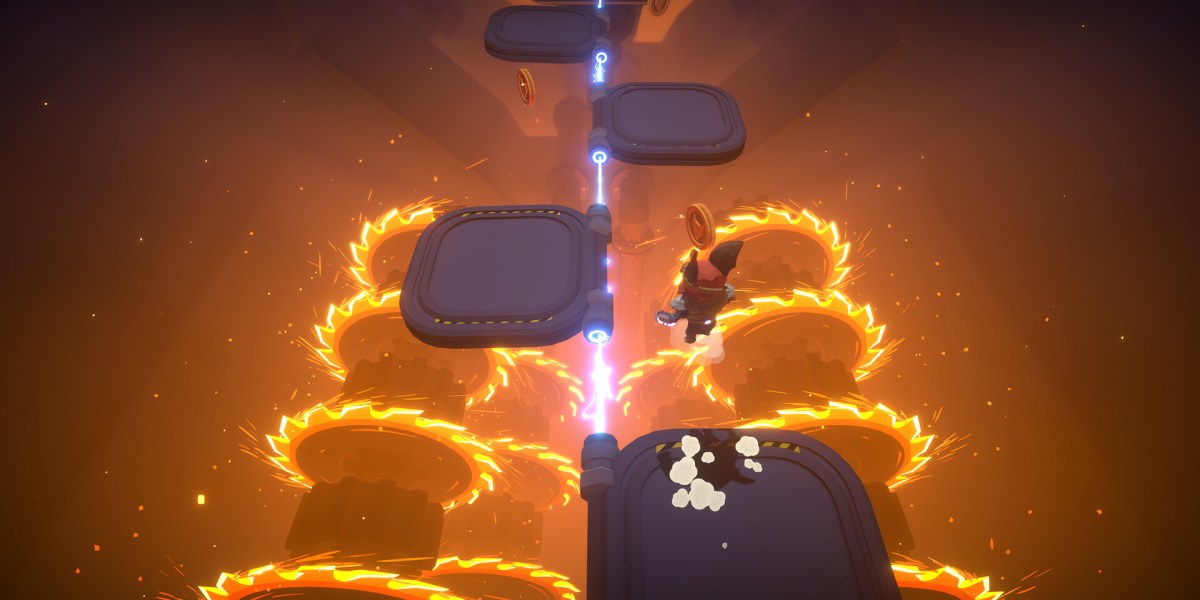 When a game is labeled as a platformer, you’re going to expect certain things from it: dynamic level design, a nice, weighty jump, perhaps an add-on skill or two. As an homage to classic platformers, Trifox has all that plus some. While it falls a little flat in a few areas, it still manages to be a quick-paced and fun 3D platformer that has beginners in mind.

The game opens with a walkthrough of the eponymous Trifox’s life, as told through family photos, before his house is attacked and burglarized by meaner looking foxes (who also happen to be pirates, maybe?). This sequence is played for laughs and sets the tone for the rest of the narrative. Although, I’m not really sure what the narrative is. I just know Trifox’s seemingly important remote was stolen, and he needs it back. The story is minimal, and the humor is juvenile, but it breaks up the levels and adds a touch of cuteness to the game.

One class to rule them all

Once things get going, your first objective is to choose one of the three classes to play as — either a Warrior, Mage, or Engineer. Each class has its own dash-like movement specific to it and nine other abilities that you unlock as you progress through the game. Thankfully, the tutorial is as non-invasive as it could be. Either you read the signs that explain gameplay elements, or you don’t. That’s the extent of it. 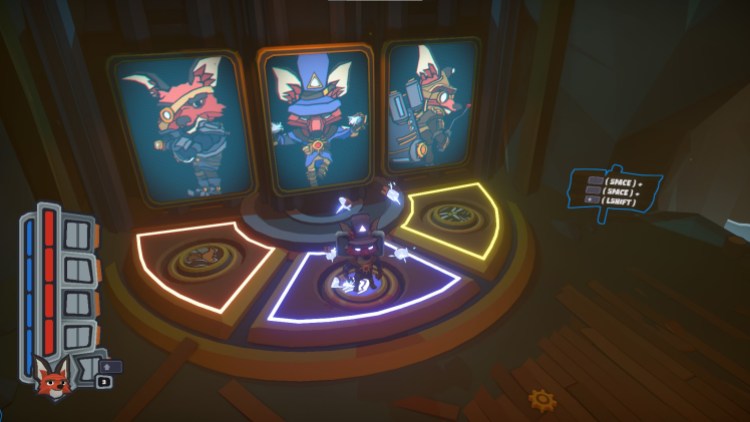 The classes are your usual affair. The Warrior is a beefy tank with slow but hard-hitting attacks and decent crowd-control abilities. The Engineer deals with ranged machines like turrets, guns, and missiles. And the Mage is another ranged class that has a lot of defense abilities and vial-based attacks. Its magic feels more similar to dark magic as opposed to elemental.

Trifox’s main strength is its ability tree. Coins gathered in levels can be spent on unlocking tiered abilities, and the game doesn’t restrict loadouts. I assumed I’d stay true to my usual and tank my way through every level, but Trifox really encourages a more versatile playstyle. I often rocked skills from all three classes because no one class has it all. For example, the Mage skill tree is full of high-defense skills, whereas the Engineer feels more geared towards quick bursts of movement and multiple points of attack. 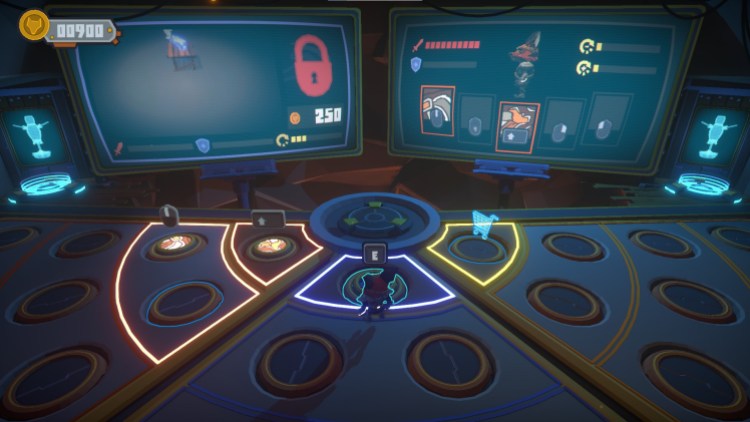 In addition to the platforming, Trifox is also a twin-stick shooter, so mechanically the class abilities should feel very similar as you focus on moving and aiming. Yet with only three classes available, the customization options are vast, and I was shocked to see just how different they all played. That’s not to say they reinvent the wheel, but swapping a Mage skill for an Engineer skill can change how you go about clearing levels.

A whole lot of jumping

When you finally get into the player hub, the first world awaits. With a total of four worlds, each one has three main levels and a boss level. The exception is the fourth world, which switches up the formula a bit for the finale.

The level design is less linear than I like in 3D platformers (I enjoy building momentum as I jump and sprint), but every world still has its own distinct flavor. Moving through each world feels different as you defeat mobs and solve puzzles to advance. Even when the worlds or their enemies look similar, they function differently. For example, one world may have a green ball of grass that deals damage over time. In the icy world, that same enemy is now blue and spits ice that slows you instead. Bosses follow a similar pattern. They all look incredibly different, and while some attacks are essentially the same, they have enough variety to feel like a new experience. 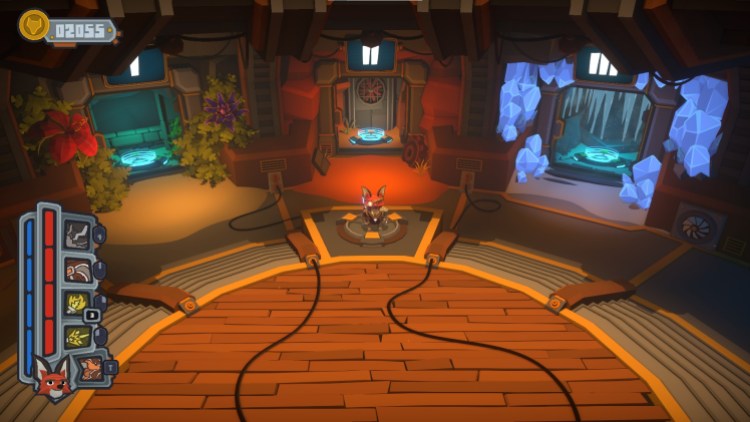 Other than that, everything regarding gameplay and mechanics is as standard as the classes themselves — beat baddies and collect coins. There’s bonus chests and extra gems to collect for more rewards, puzzles to solve, and puddles of water to avoid.

It’s hard to pinpoint if an issue in a game is a bug with longevity or just a random occurrence. Regardless, I ran into a couple of problems with Trifox, but luckily, they only popped up a few times each. The first occurred at random. I’d fall through the ground or freeze in place unable to hit anything while also becoming fully impenetrable. The only option was to reset the entire level. At the normal difficulty, death checkpoints and autosaves happen often enough that a death never feels that detrimental. A bug that completely freezes gameplay and forces you to start over, however, is. 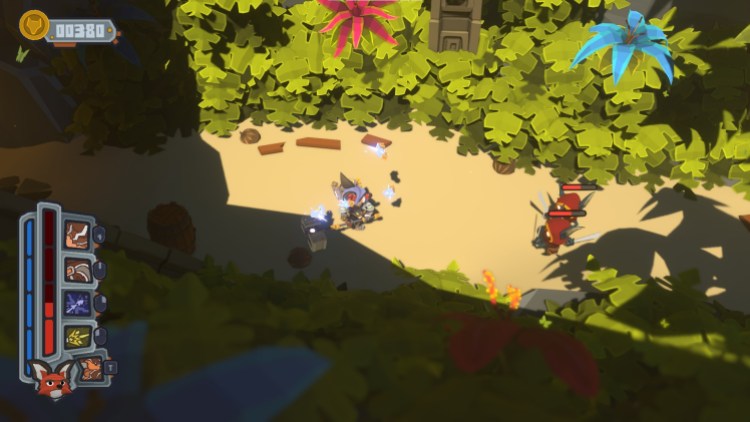 I also had an issue with a skill that causes Trifox to bang around the screen, hitting any enemy in range for a high amount of damage. It’s a good ability to use when mobs are swarming, but I’d often get stuck in the ground or world elements when the ability was used in tight spaces, which kind of defeated the point.

So about that jumping

Despite a couple of smaller gameplay issues, the main thing I have an issue with is the jump itself. This is a problem I’ve run into before in 3D platformers, but the jump in Trifox is so unbelievably floaty. Combined with the camera that changes angles and skews depth perception pretty often, it was often hard to judge where Trifox would land after hitting a jump.

A part of the learning curve in the game isn’t just figuring out the best ways to solve a puzzle or defeat a boss, you also have to learn how the game handles movement. I like a weighty jump that feels solid and minimal. Especially with a double jump available, having the jump feel like it’s taking place on the moon isn’t necessary. 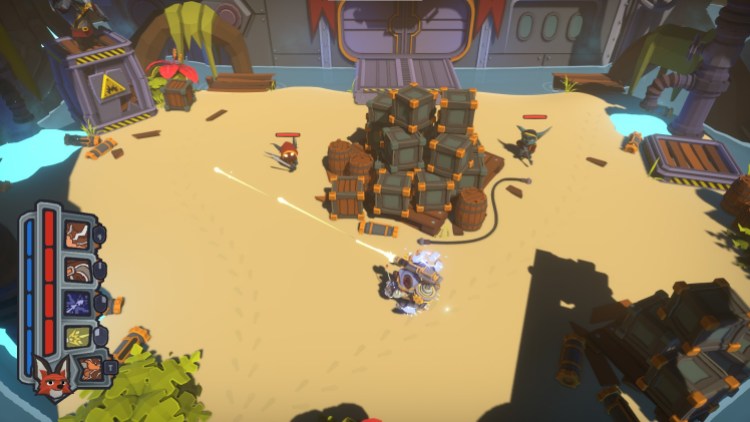 But that’s really where my complaints begin and end. Trifox is a colorful 3D platformer with enough customization options that replays are worthwhile. Instead of replaying it just to go for new times, you can cater the experience to a completely new gameplay style and the range of difficulties make it an easy game to get into, especially for anyone new to platformers.

Trifox is colorful and humorous with a minimal story, but a surprisingly full gameplay experience. While I had some issues with the mechanics, the game still manages to be a solid 3D platformer and twin-stick shooter.