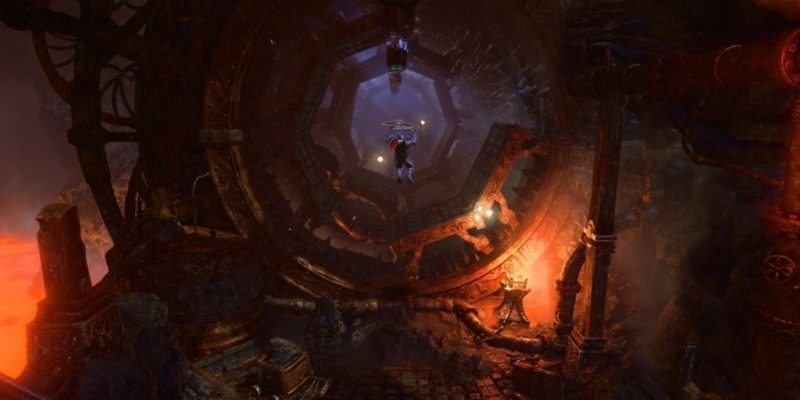 The first two games of the Trine trilogy are held in high regard among much of the PC community. The pseudo-3D puzzle platformer has always been difficult, yet addictive, with great narrative and stunning graphics to show off just how powerful a rig is. With such a cult following of the games, the announcement of Trine 3: The Artifacts of Power was met with much anticipation, as the game made the jump into full 3D and was being developed under Early Access with quite a large budget.

Trine 3 has now left Early Access, and Frozenbyte’s most ambitious title of the trilogy is now a full release.

Like all the other Trine games, players are first introduced to the trio of protagonists for the game, Amadeus the Wizard, Pontius the Knight, and Zoya the Thief. The whole crew decides that they don’t want the mystical powers that Trine granted them in the previous games and set out to return the powers to the artifact. While fumbling around with Trine, the three characters shatter it, unleashing an ancient sorcerer, and that’s the story. I wish there was more to share, but there really isn’t. Sure, there’s a little more to build on the story, but the game never comes to a satisfying conclusion. With a series that has been known for such a magical and captivating narrative, Trine 3 simply feels like it’s been choked out (more on that later).

The jump to full 3D has wildly changed how the game feels. The previous entries in the trilogy have been known for perfectly blending mind-boggling puzzles and complex platforming sections, but Trine 3 just doesn’t hit that mark. Full 3D has hurt the game in an incredibly unfortunate way. With a fixed camera, the puzzles just become more difficult to solve, and the platforming sections just become more frustrating to finish. Not because they’re clever, but because half the time a player can’t see what is happening on the screen.

There were countless times that I died trying to jump across a gap or solve a puzzle when all I needed to do was move closer or further away from the screen to reveal something that easily bridged me into the next section. It is absurd that a fixed camera is making choices for me as player in a series where freedom of choice to overcome obstacles has been such a staple.

Another change to the gameplay is the inclusion of the Trinangle system, where players don’t progress from level to level, but instead have to collect items (called Trinangles) in each level in order to unlock the next chapter in the overworld. Again, this just hurts the game. While going through each level, I was far more concerned about collecting enough Trinangles in order to progress forward, than I was getting immersed in the world of Trine. This really is a shame, considering the world Frozenbyte has built can be such a beautiful and magical one.

That is not to say that Trine 3 isn’t beautiful, because it certainly is. Every single item littered around the world feels like it is glowing with some sort of magical energy. The vibrant colors, and flawless physics engine make the game look and feel like butter when running around.

Some of the sites in the game are truly stunning. When the camera is working properly, it looks like the player is walking through the trailer, revealing sites that are absolutely breathtaking. The love shown to the visual side of the game is completely apparent, as it is with all the Trine games, and leads to levels that feel like they have life breathed right into them.

Trine 3 demands a hefty rig, but experiencing the visual awe that that game provides in truly something special.

The levels are accompanied by a mystical soundtrack composed by Ari Pulkkinen, the mind behind the previous two titles soundtracks. There is something about the music mixing with visuals that stimulates the player’s imagination. The soundtrack sounds like pure fantasy, and is icing on the cake for the visuals in each level.

Each of the previous Trine titles have featured a narrator who brilliantly tells the stories of our heroes, bringing back vivid memories of bedtime stories from childhood. However, he isn’t featured as much in Trine 3. While he still narrates the story, I never felt like a little kid, tucked into bed like I did with the previous games. The sense of wonder is cut off at the knees by not allowing the narrator to show off is mysterious and awe-inspiring voice.

This isn’t the only area that feels cut off either. In fact, half of the game feels like it’s missing. Not only does the game end out of nowhere, only offering 4-5 hours of gameplay, but even the levels feel like they’re missing a huge chunk. It seems that end of a level jumps out of nowhere, never fulling giving a sense of completion. It is a very hard pill to swallow to think that Early Access may have forced Frozenbyte to cut planned content out of the game, leaving a product that feels like pieces instead of a full form.

However, while the game lasts, it is still fun. There is still great content to play through. Trine 3 still offers plenty of puzzles to solve, goblins to slay, and platforms to jump on. Despite not feeling the full effect that I would expect out of a Trine title, I still felt a vague sense of childhood wonder, traversing my way through each level.

If Trine 3: The Artifacts of Power were it’s own game, than I probably would let it off a lot easier, but as the third game in a series that has always been so spot on, the problems with it are simply unacceptable. While there is fun to be had, the game feels disjointed and unpolished. The experience is good, but nowhere near the bar set by the bar set by the previous Trine titles.

It is a shame to see such a great series of games slip away. It is apparent that Frozenbyte wanted to make a great game, but unfortunately, it seems they had bitten off more than they could chew. There is love put into the game, but it isn’t enough and with the Trine and Trine 2 constantly going on sale for only a few bucks, it would make much more sense to pick up one of those incredible games than to waste money on Trine 3.

Being a fan of the series, hurts to say this, but do not buy Trine 3: The Artifacts of Power. While it may be a novelty for hardcore fans of the series, it simply does not meet the expectation set out before it.