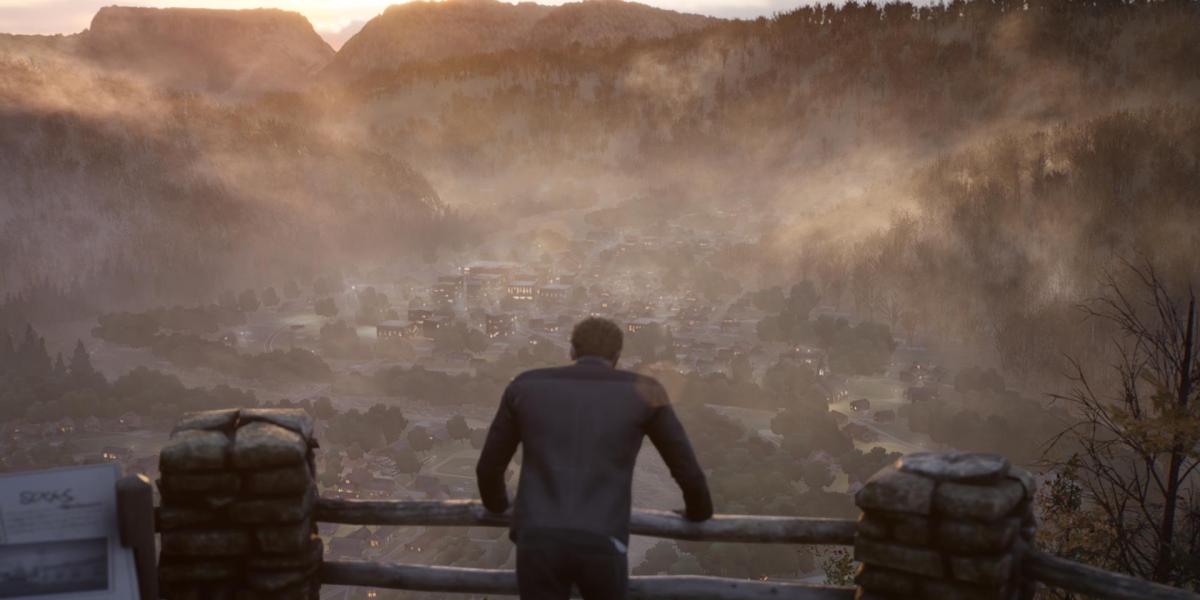 Twin Mirror is Dontnod’s latest, and that’s enough to give me pause. I mean that both as a positive and a negative. Life is Strange was largely a superb coming-of-age mystery with a supernatural bent, but the company’s other works (Vampyr and Remember Me in particular) could be a little… problematic. Vampyr had nice ideas but failed to capitalize on them, and Remember Me had some excellent sections bogged down by most of the actual gameplay.

For better or worse, Twin Mirror definitely hews closer to Life is Strange. It’s a fairly linear interactive adventure, divided up into discrete locations and chapters. It has Important Decisions™ that characters will remember. And while it doesn’t appear to have any time travel or paranormal shenanigans, it does have some rather unusual twists.

For instance! Our protagonist, Sam Higgs, has a couple of unique mental traits. For one thing he converses with the Double, a kind of voice in his head that freezes time and manifests to discuss the potential ramifications of big decisions with him. Sam also has a “mind palace” he can use to link evidence and figure out what happened in particular locations or situations. And occasionally you’ll have to play through a panic attack in his mind, which hits a little close to home. 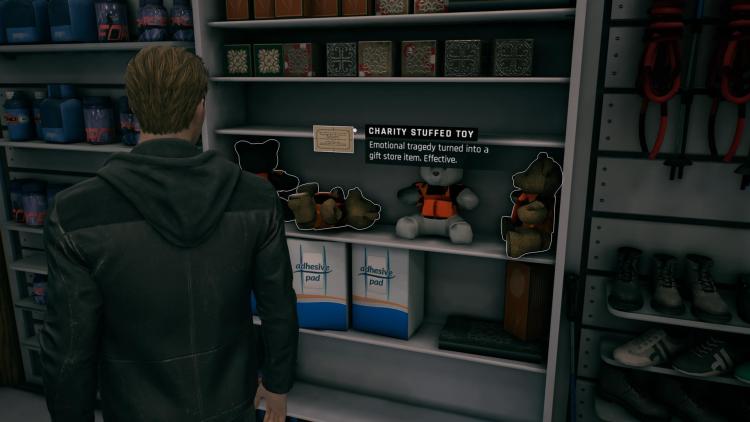 Sam’s glum demeanor, acerbic wit, and cynical mindset glare through in the descriptions of every item you can look at.

And Twin Mirror isn’t set in a gorgeous town with a fancy school and an artsy aesthetic. The setting of Basswood is the rotted fantasy of small-town Americana: a small, formerly booming mining town, now in the throes of misery and recession. (It’s worth noting that if any of this sounds familiar, I’ve previewed the game before, but that was entirely hands-off and a much shorter segment of game.)

Our lad Sam worked as an investigative journalist here, but circumstances dictated his rapid and unhappy exit from Basswood. Not only did his girlfriend turn down his marriage proposal and break up with him, but his last article was an exposé on the dangerous conditions and atrocious management of the mine. This caused the mine’s closure, and while that’s arguably a good and safe thing, it led to the town losing prosperity and many of its residents losing their jobs. 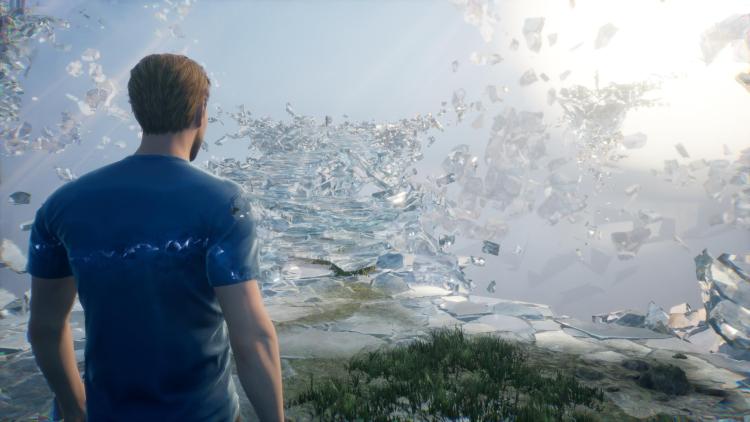 I chose my words carefully when I wrote that Sam’s mind palace was crystal clear.

The only reason Sam is back now, several years on, is for the funeral of his former best friend Nick. This means contending with not only the townsfolk who wish he never came back, but also the ones who’re angry that he ever left. It’s a painful homecoming in more ways than one, and Sam isn’t really sure he should have come back.

But then it turns out that there’s something fishy about the car “accident” that killed his friend. And there may be even more secrets buried beneath this supposedly sleepy, down-but-not-out little town.

To be honest, Twin Mirror starts slowly, but it maintains Dontnod’s delightful eye for the cinematic. The opening has Sam driving through the town, as we gaze at dilapidated buildings and “For Sale” signs. A brief stop off on a promontory introduces us to more of the town and to Sam’s past, before we visit the wake. It’s a bit of a low-key slog, but things amp up considerably after the wake which acts as an introduction to most of the characters. 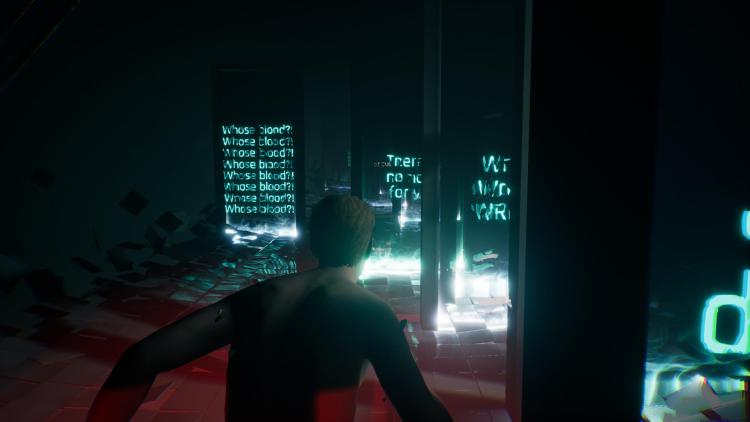 This mini-game is a bit of a jarring shift in both tone and gameplay, but as a representation of a panic attack, I suppose that’s rather the point.

After getting blackout drunk at the wake, Sam awakens the following morning in his hotel room… and finds his shirt in the bathtub, liberally doused in blood. This leads into a trippy, surreal panic attack in Sam’s head: a short mini-game in which you flee a lumbering figure and dodge gates that visibly scream GUILTY and JAIL and BLOOD BLOOD BLOOD, while trying to reach gates that calmly tell you to focus. And once Sam’s chilled out, we come to one of Twin Mirror‘s more puzzle-y features: finding out what the hell happened.

For all his (many) failings, Sam is an excellent investigative journalist and has an eye for detail and for figuring out what happened. After sneaking back into the bar in which the wake was held, you wander around looking for clues. Once enough are assembled, you venture into Sam’s mind palace and determine what, exactly, happened.

It’s very, very reminiscent of Remember Me‘s end-of-level puzzles that had you rearranging memories. Here, every clue has a number of possibilities. Did the brawl lead from the table towards the entrance, or towards the pillar? After that, where did things go? Who were you even brawling with? When you think you’ve arranged a plausible explanation you can tap a button to see this series of events play out, and see if it matches the clues.

Not just a copycat 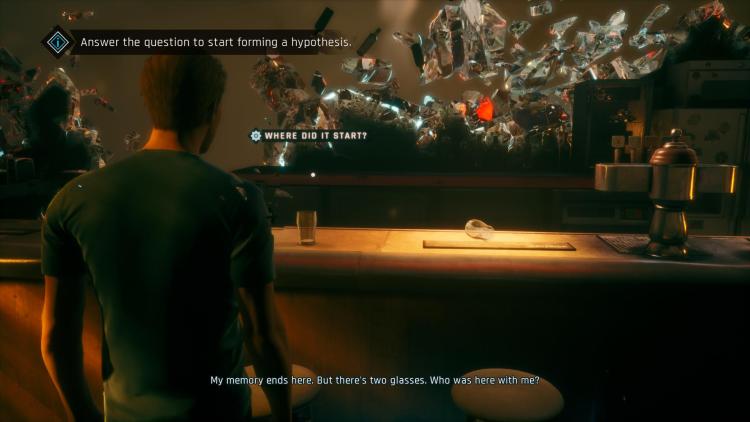 Fiddling with the various options in the mind palace deductions and seeing how things can play out is genuinely quite fun.

These aren’t particularly in-depth puzzles (early on, at least) but there’s potential here, and they’re a legitimately interesting break from walking around examining things and making decisions that may or may not have a lasting impact on your adventure. My only complaint here is that a few clues are a little tricky to find, leading to a teeny bit of aimless wandering in a later segment, but it’s nothing too problematic. This isn’t a full-on point-and-click adventure, thick with puzzles, but some thought and experimentation will be required.

And then things kick up a notch again. Most of the rest of my time in Twin Mirror‘s demo was spent figuring out what happened to the person Sam fought with, choosing whether to trust certain characters, investigating the scene of the car wreck, and stumbling upon a murder scene that may explain Sam’s bloody shirt. The hits came thick and fast during the last segment of playable content, with the slow-burn of the opening turning out to have been the fuse for a keg of dynamite.

There’s an awful lot I like here, too. Twin Mirror plays off some familiar Life is Strange conventions, like the town itself having dark secrets, but there’s no shiny side here. This feels almost noir-ish, with more dimly lit scenes and more tumbledown areas contrasting with the bright and beautiful mind palace. So far, it feels more adult than Life is Strange, and not just because of its characters. The interactions with the Double are neat, too; they provide a little extra context and insight in a way that feels natural, with the Double being a tad more empathetic than the analytical Sam. 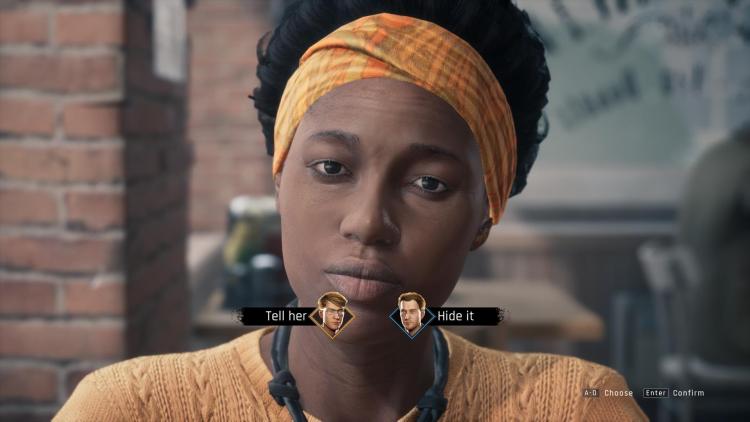 While the Double believes she can be trusted, Sam’s own thoughts are a little more reserved and doubtful. Empathy and trust, or cold analytics? Neither are necessarily wrong.

There’s a lot I don’t know, of course. I don’t know if the big decisions (which are very visibly heralded) will lead to wildly different outcomes, nor do I know if the mystery will end up being satisfying. I’m hoping that Twin Mirror won’t follow the Life is Strange pattern of “oh, this character who was an arsehole is actually good”, at least.

But what I’m most interested in is seeing how Dontnod manages pacing without episodic constraints. The last 30 minutes of this playable chunk were, as noted, a deluge of big moments and revelations. I assume things will slow down, but there were a few points there where I was half expecting a fade to black and a “Continued in the next episode.” Twin Mirror was, after all, originally intended as an episodic game, and those require different beats and a different flow to one continuous story. Whether the pacing works is a real concern.

Nonetheless, what I’ve seen here has impressed. I’ll be committing this one to my mind palace, and I’m looking forward to examining the evidence and joining Twin Mirror‘s dots when it launches on December 1.