Since its inception, Twitch has been a place for players and esports fans to congregate and watch grown adults swear loudly at video games. For many, the idea of swearing at video games while people watch is inspiring. After all, video games and colorful language go hand in hand. However, getting your own stream setup has rarely been as cordial. Up until now, streaming on Twitch has required third-party software and fine tuning to get started. But that might not be the case for much longer. Today, Twitch has unveiled its own broadcasting software, and you can sign up for the beta now.

The impetus behind the idea is to get new streamers on board without the hassle. I’ve streamed in the past, and I know full well the kind of work that goes into starting. Most budding streamers use free software such as OBS. But figuring out how to properly set up all the parts, such as the camera, microphone, and other minutiae, takes time. With Twitch Studio, that lengthy process may become a thing of the past.

“We don’t want to throw an hour of setup at you,” said Cheng Cheng, director of product management for the creator experience at Twitch, to The Verge. “We want you to just actually get started and start to enjoy what you’re passionate about.” 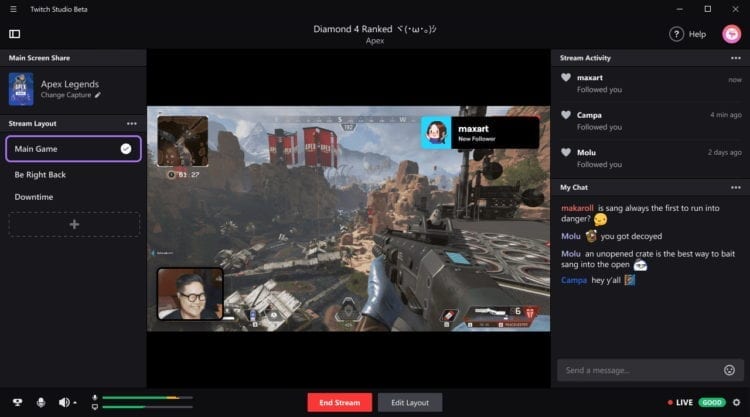 Twitch Studio will have a place for everything and everything in its place.

According to the Twitch Studio page, the company is aiming its software at new streamers. In other words, it doesn’t intend to directly compete with third-party software creators; it only wants to offer the initial step. Those who use the software and wish to branch out to other software that offer more features can certainly do so.

Regardless, Twitch Studio does seem to come with all the necessary bells and whistles. It shows off not only what viewers can see, but it also offers you a chat window, layout options, and an update for follows and, presumably, new subscribers and donations. The software provides you other stream information, such as whether or not the network connection, or bit rate, is going strong — which you can see at the bottom-left of the above image (currently at “GOOD”).

You can sign up for the Twitch Studio beta by heading to its official page. Happy streaming.