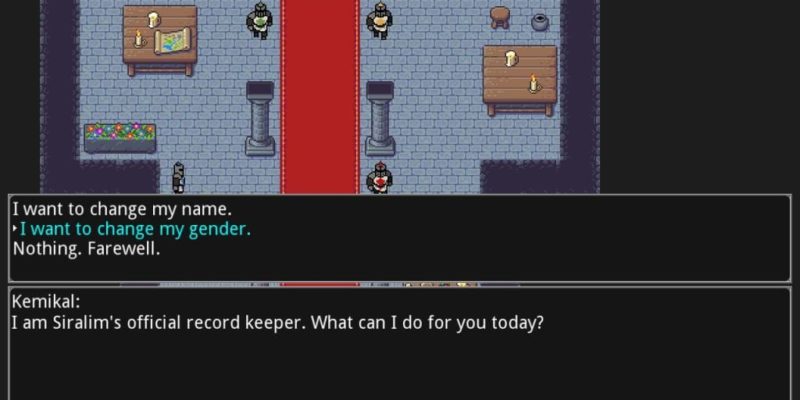 As you’ve probably realised, we get quite a lot of games sent to us. As you’ve probably also realised, there are – most of the time – only two of us continually working on on the daily content for IncGamers. This presents a bit of a problem, because it means we wind up with a lot of games we simply don’t have any time to properly review, particularly with our “we don’t review anything until we’ve finished it” policy.

So, once again, I’m trying to figure out a way to shine a spotlight on some of the things we get sent, that we don’t have time to fully review. Welcome to Two Hours With: Siralim, so named because I spent two hours playing a game called Siralim, and now I’m going to write about it.

It’s also an incredibly progressive game, as this screenshot shows.

Siralim piqued my interest by using the word “roguelike” in its description, which has pretty much the same effect on me as the word “walkies” does to a dog. You’re the newly-crowned wizard king of Siralim, and it’s up to you to reinforce and expand your castle by summoning monsters, opening portals to randomly-generated realms, gathering resources, and punching monsters in the face. Which you can then summon into your party.

So: RPG, with lots of stats, some random generation, and a Pokemon-esque monster-capturing-and-summoning mechanic. That sounds pretty great. Let’s see how it goes.

First things first: character creation. This involves choosing a name, a gender (which appears to change nothing but pronouns) and a class. Despite the game’s attempts to explain the differences between them, I suspect that the class is something that I’d understand more after actually playing for awhile, so I flip a coin and opt for being a Chaos Mage. Calculated risk-taker? That sounds fun!

And in the game, too.

After that, I’m in the castle of Siralim, gazing at the rather lovely 16-bit art. The obligatory tutorial quickly walks me through summoning monsters (get three cores, go to the spell chamber, summon them) and the basics of combat, which is a turn-based affair in which creatures alternate based on… well, initiative, or something like it.

The tutorial fights themselves involve beating up an ambulatory castle, which fortunately doesn’t fight back so that I can get the hang of the basics.

At least it didn’t collapse on me.

Cores themselves can be extracted from monsters I fight; once they’re low on health, choosing Extract in combat won’t deal them any damage, but might glean me a core. Get three cores from the same type of monster, and I can summon it for an expenditure of my other resources. As I level up, I can get more party slots for more monsters.

I also earn Royalty Points, which unfortunately are not something you can redeem with MI6 to have somebody assassinated. Instead, they let you upgrade… basically everything. Castle construction speed. Rewards from combat. Chances of treasure. The attack damage of your party. Everything.

If that felt like a massive info dump… well, that’s because it sort of was. It’s spaced out a little better in Siralim itself, by virtue of being split across a few quests that’ll take you a little while to complete, but it still felt like a huge wave of information washing over my blissfully ignorant self. Fortunately, it’s not all crucial to immediate play.

All you need to know is: go through a portal into a realm. Complete the quest there to get some bonus xp, duff up monsters, extract their cores so you can summon them if you want to, level up yourself and your monsters, proceed through into the next area of the realm. Portal back to your castle occasionally to construct new bits and pieces, or gamble, or swap out your party, or summon new monsters.

My first excursion into a realm went quite badly. I mean, the realm itself was a big rocky land of molten horror, which probably should’ve been my first clue, but things actually went okay initially. I found monsters, I punched them, I levelled up. Then I found a statue.

It congratulated me on finding it, and told me it was cast a Pandemonium spell as a reward. My reward was it summoning six relatively high-level monsters which murdered my one-person-strong party instantly. THANKS GAME.

Oh, this is going to go well.

So, after respawning at my castle, I carried on. I levelled up. I summoned more monsters for my party, including the hilariously named Gimp Mummy.

No, I wasn’t making that up.

The Gimp Mummy showcases something I really like, actually, and I’m not just talking about its bizarre name. Most of the monsters appear to have unique little quirks that massively differentiate them from just being a pile of statistics – in the case of the Gimp Mummy, on death, they transform into a randomly-chosen other monster. While incredibly weak in their Mummy form, you might get lucky and wind up with something rather powerful should they bite the dust in battle.

This was around the time I stopped paying the game full attention and started playing it while watching stuff in a window to the side, which is maybe a little unfair of me, but I do this with pretty much anything I can run in a window as long as it doesn’t require twitch reactions.

It’s a good game for that, too. Combat wasn’t overly tricky at this point, so I could attack with relative impunity and as long as I chose targets wisely (kill healers first, avoid Gimp Mummies because I’ll just have to kill the buggers again when they turn into something else) it was largely smooth sailing. I unlocked a new realm through a ritual in my castle. I unlocked some new monsters in the game. I progressed, proceeded, and expanded.

Throughout this, “Castle Quests” were providing me with a general progress goal. These were the ones that started off with the tutorial bits and pieces, and later expanded to “go into a realm, finish its quest, come back” and then “start a ritual, go into a realm, beat up monsters to power it up, come back.”

Did I enjoy it?

Yes – with caveats. I’d have liked a bit more character to the world, although in fairness that might come into it a bit more later. I do like that you can either heavily delve into the stats and optimise everything, or you can just spend your time and resources summoning monsters that look fun, or expanding your castle and your gameplay experience in whatever direction looks interesting. I treated it more as a “light” game, and it’s fine for that, but it looks like you could certainly get heavily involved in the number-crunching if you want to.

I don’t think two hours was enough time to really judge it, because I get the sense it’ll expand a lot as you proceed. I’d imagine that Castle Quests will offer a genuine sense of progress rather than just watching numbers go up, but that’s something I didn’t really get the chance to see. As such, it might be less light than I think – or, by the same token, it might be less in-depth. Hard to say.

Will I play it further, based on these two hours?

Actually, yes. Siralim didn’t massively capture my interest in these two hours, but it’s an inoffensive and enjoyable time-sink, and whenever I find a series of videos I want to watch or have some time to kill with Netflix, it’s quite likely I’ll click Play and expand my kingdom further.

It’s not something I’d devote a lot of time to, but as something to dip into occasionally on a laptop or while half-watching something and relaxing, it fits the bill quite nicely.

GTA 5 PC getting iCEnhancer mod to make it look stunning

By Jamie Sharp6 hours ago
Features

By Ben Simmons6 hours ago
Previews

By Tim McDonald12 hours ago
Previews