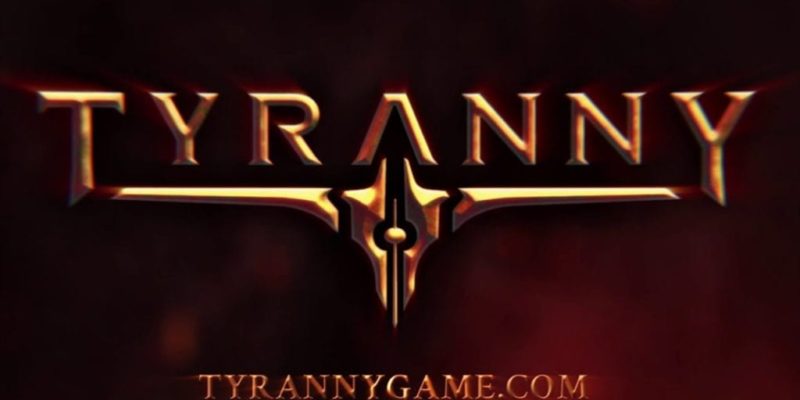 After the success of Pillars of Eternity, Obsidian announced they would be making another Infinity Engine-esque RPG called Tyranny. It will be released on 10 November.

In Tyranny, the realm has been conquered by the oppressive, authoritarian, but ultimately law-driven forces of Lord Kyros. Kyros delegates the running of her (or his, that’s part of the mystery) empire to lieutenants called Archons, who control armies, regions, and guilds within the land. The player will take the role of a Fatebinder, a set of mediators and interpreters of the law created by Tunon the Adjudicator (the Archon of Justice). As a Fatebinder, it will be up to you to uphold the law of Kyros and pass judgment on those living at the fringes of the empire. You’re effectively a near-infallible member of this fantasy land’s Supreme Court.

Tyranny will be built on a lot of the technology developed when creating Pillars of Eternity, so expect to see some of the same foundations (like the method of depicting environments, albeit different ones) here. The intent is to start the player out as a powerful character within an established role, rather than the usual RPG route of building up from a much weaker start. While there will be stat gains, the focus will be on reactivity and choices within quests and systems.

It’s a shorter game than Pillars, running to an estimated 20-25 hours. The emphasis on choice and consequence should, one would hope, make Tyranny quite replayable.

Companions will be present in Tyranny, and will all have their own opinions on how you’re doing your job as Fatebinder. Your relationship with them (positive or negative) will impact the narrative, but their views are not set in stone. It will be possible to convert or manipulate companions into believing your own world view. Their combat roles will also be customisable, but in the more traditional RPG manner of altering their equipment and abilities. The party will max out at four (including your own character).

Six companions have been revealed to date. Barik of the Stone Shields is described as “the quintessential Disfavored soldier” (respectful of authority, intolerant of outsiders), and functions as a “a much-needed shield to protect the party from danger”. A ‘Sentinel’ combat tree will increase damage absorption, while the ‘Punisher’ tree will make him more pro-active in slaying those who stand against him. Meanwhile, Verse is “a fierce warrior with ties to the Scarlet Chorus”. Her free spirit and sarcasm are the flip-side of Barik’s emotional repression. She’s a Scarlet Fury, trained in all manner of exotic weaponry, and sees combat as an art form or dance. In battle, she can switch between a melee and ranged role with ease, making use of a duel-blade ‘Duelist’ tree, and longer-ranged ‘Skirmisher’ skills.

Lantry, a “Sage of the School of Ink and Quill” has also been revealed. And the second Tyranny dev diary video (about Artistry) showed a brief glimpse of a 16 year old Opera singer companion called Sirin. The 10th development diary from Obsidian revealed Eb, a Tidecaster, who can act as an offensive spell-caster or crowd-control mage. Most recently, the Beastwoman Kills-in-Shadow has been profiled.

Mechanically, Tyranny is a skill-based RPG. These fall under three broad categories: Weapon skills (how accurate you are with a weapon of that type), Magic skills (how precisely magic sigils can be drawn, and their forces controlled), and Support skills (how nimble you are, how knowledgeable, how sneaky).

The base value of skills will be determined by six ‘core’ character attributes.

Skills in Tyranny increase in experience through use. When they gain enough experience, they increase their skill rank; and when a skill increases in rank, your character gains experience towards their next level. This can’t be ‘gamed’ by simply going after low-level threats multiple times, or climbing up the same section of wall over and over again. However, it means all optional combat encounters will be worthwhile to some degree.

This is an Obsidian RPG, so fighting won’t be the only way out of such encounters. Tyranny will allow players to level up conversation skills as well. If you intimidate someone into fleeing through dialogue, you’ll get experience points roughly equivalent to winning through outright violence.

Experience points are dished out for completing quests, but these rewards are lower than in a game like Pillars of Eternity.

Tyranny also shares a fair bit in common with Pillars when it comes to combat. Battles will be real-time-with-pause affairs once again, with character spells and abilities on a cooldown system. Something new for Tyranny are companion combos; special abilities that enable your character and a companion to work together for a powerful effect.

With any attack (be that weapon, spell, etc) the attacker’s Accuracy is compared to the target’s Defense to determine a result. Miss, Graze, Hit or Critical results are all possible, like in Pillars. Accuracy itself is determined by one or more character skills (a spell, for example, will use “the magic skill for that type of spell and the character’s Lore skill”). Bonuses from weapons and abilities are added to the base value to determine the final Accuracy score. Defenses fall into the following categories: Parry, Dodge, Endurance, Will, or Magic. Some attacks will be better options against one type of Defense than another.

Damage types, again, share quite a bit with Pillars. Characters and enemies can take Slash, Pierce, Crush, Burn, Shock, Frost, Corrode, and Arcane damage. As you’d expect, some characters are weak to certain damage types. Armour can still mitigate damage, and has been tweaked a bit to give “more options for different character builds”. Heavy Armour give an ‘Armour’ stat that can reduced damage to a minimum of 1. Lighter armours have ‘Deflection’ that can be further boosted by stats like Finesse.

Where Tyranny differs from Pillars is in how it handles hit points. In Tyranny, there’s a single Health bar (no Endurance). If that falls to zero, the character will fall unconscious (or die, if you’ve selected that game option). Character’s can be revived with skills and consumables in combat, but will automatically wake up again once combat is over (assuming they’re only unconscious). Health will then start to regenerate. People who fall unconscious will gain one Wound (or more on harder difficulties), reducing max Health and giving a skill penalty. Wounds will remain until the party rests.

Other notable combat changes from Pillars include a simplification of the Interrupt mechanic (no longer a separate roll, some abilities will now just Interrupt with a Hit/Crit), making consumables instant (but when you take one, all consumables go on a cooldown for that character, preventing healing spam), and the removal of Friendly Fire from abilities.

Tyranny has four difficulty modes: Story Mode, Normal, Hard, and Path of the Damned. It is stated that the intent at higher difficulties is to “focus more on the AI and tactics of enemies rather than just adding more enemies to each encounter”. There will also be some harder, replacement enemies on higher difficulty levels.

The Commander Edition is $44.99, the Archon Edition is $59.99, and the Overlord Edition is $79.99. Here’s a comparison chart between each edition (click for larger image). 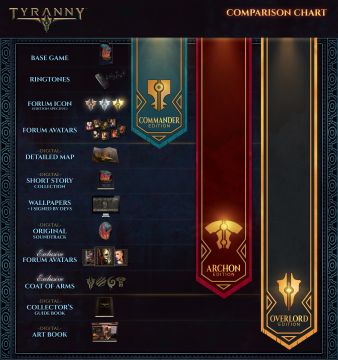 Supporters – Win a copies of the Order of Battle: Blitzkrieg and other expansions