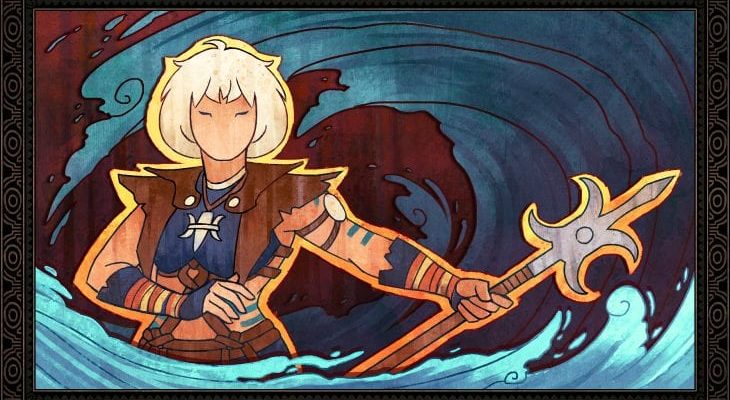 The latest Tyranny development blog introduces a new companion that it’ll be possible to recruit in the game: Eb, a Tidecaster. Tidecasters in the Tyranny universe are an order of mages who study manipulation of water in all its forms, including the lunar pull of the moons.

When threatened with Tyros’ conquest, the Archon of Tides (Occulted Jade) fled with the vast majority of the school’s students. Four remained to continue the fight, including Eb. The other three are dead, along with Eb’s husband and children. As Obsidian put it, her life is now “little more than battle and living on the run”.

In combat, Eb can potentially control the battlefield and bring devastation to foes in great number. She’s proficient in both Gravelight and Tidecasting magic, capable of becoming a powerful direct spell-caster or taking on more of a crowd controlling role.

Her ‘Tidal’ tree focuses on “a variety of effects from pushing groups of foes, or drowning enemies in globes of water, to obscuring the battlefield in a magical mist or hastening ally movement,” while the ‘Gravelight’ strand offers “calling upon Terratus Grave to lift foes into the air and slam them to the ground, siphon life from enemies, or even to warp her to different locations”.

Here are some of the specific abilities open to Eb in Tyranny.

Repelling Blast: Eb raises her hand and a powerful blast of water erupts forth, pushing foes back violently and damaging them.

Mother’s Embrace: Eb summons a globe of water around the target’s head, causing them to slowly drown, dealing damage over time and silencing spellcasting.

Clear Mind: As long as Eb is not taking damage her mind calms, reducing her Recovery and allowing her to attack twice with each basic attack. (Taking damage suppresses this effect for several seconds.)

Return to the Source: Channeling her tidecasting magic, Eb summons the water from the target’s blood and tissue, erupting it out of them in a violent surge and dealing extreme damage.

Terratus’ Call: Eb raises her arms and summons a beam of moonlight to surround her target. Terratus’ magic lifts the enemy into the air and then brings them violently back to the ground, dealing Crush damage and leaving the target Prone.

Runic Barrier: While in combat, Eb begins channeling magical energy through the runes tattooed on her skin, generating a field that protects her as if she were wearing armor. (Only activates while Eb is not wearing Heavy Armor).