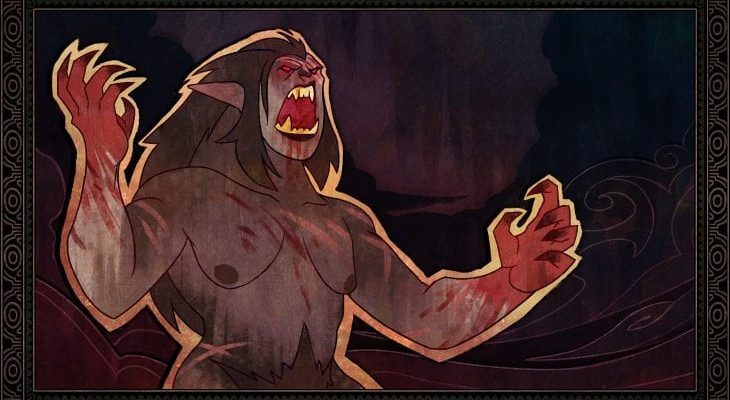 The latest Tyranny dev diary takes a look at Kills-in-Shadow, a potential party companion in Obsidian’s upcoming RPG. She’s a Beastwoman, who’ll use raw strength, stealth and agility to aid you in combat (assuming she’s on your side).

Kills-in-Shadow is, according to the backstory, the “last surviving Shadowhunter”, and the implication is that the Disfavored were instrumental in wiping out the rest. If you can distance yourself far enough from Kyros’ slaughter of her kith (might not be easy, since you basically work for Kyros in this game), then Kills-in-Shadow should be a powerful ally.

By the sounds of things, she’s a rogue-type character with a bit of tanking ability. The diary explains that she’ll get significant bonuses for initiating combat from stealth (especially against isolated or weaker targets), and has a huge hit point pool with which to absorb blows. However, although she has some natural armour, she won’t stand up to repeated attacks or being surrounded, so can’t withstand the sort of beating that a fully armoured character would.

Here are some examples of her abilities in Tyranny.

Leaping Death: Leap onto a nearby enemy from stealth, heavily damaging all foes in the area and knocking them Prone.

Primal Scream: Roar at nearby enemies, Frightening them. If this ability is used while stealthed enemies become Terrified instead.

Disembowel: Use both claws to rip the target’s stomach open, dealing a large amount of Slash / Pierce (best of) damage and leaving them Bleeding for an extended duration.

Trample: KIS moves rapidly towards her enemy, trampling foes in her path. Enemies caught in her path take Crush damage and are knocked Prone.

Taste of Blood: Causes all attacks from stealth to inflict a lasting bleed affliction. When Taste of Blood triggers, KIS receives a regeneration effect until combat ends.

Stance: Berserker Rage: KIS enters a primal frenzy. While in this stance, damage taken is increased, but KIS receives a large bonus to Endurance and Melee Damage.

Hitman invites you to finish the elusive Fixer on 14 October