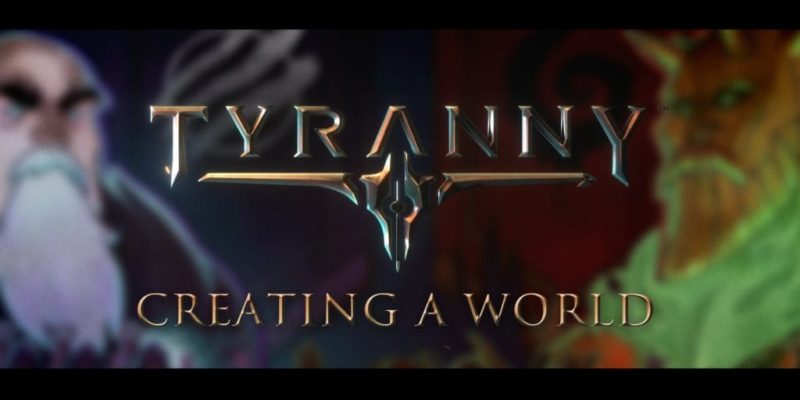 Obsidian have released the first in a three part video series exploring various aspects of their upcoming Tyranny RPG. In this first installment, the focus is on setting up what the game is, and how the choices you’ll make will impact the world (and subsequent replayability).

As people who’ve followed development will probably already know, Tyranny casts you as a Fatebinder of Kyros; an overlord whose armies have conquered much of the world. The game is set in a region called The Tears, a lone area that hasn’t quite fallen to Kyros. She wants to change that, and your job is to secure The Tears for the Empire.

This being an Obsidian game, the concepts of ‘good’ and ‘evil’ aren’t explicitly clear in this world. Kyros is definitely a tyrant, and the systems of justice and bureaucracy (of which the player is a part) are corrupt, but attempting to navigate through the game with traditionally ‘good’ RPG actions will have consequences for yourself and others.

Those consequences are expanded upon a little in the video. Your actions could lead to cities populated by entirely different groups of people, or rendered in two by an earthquake that you had a hand in. Alliances and betrayals will play out according to your decisions. It’s also noted that the major quest-lines in Tyranny don’t always send the player to the same areas in each play-through.

Have a watch, below.

Nier: Automata is coming to the PC