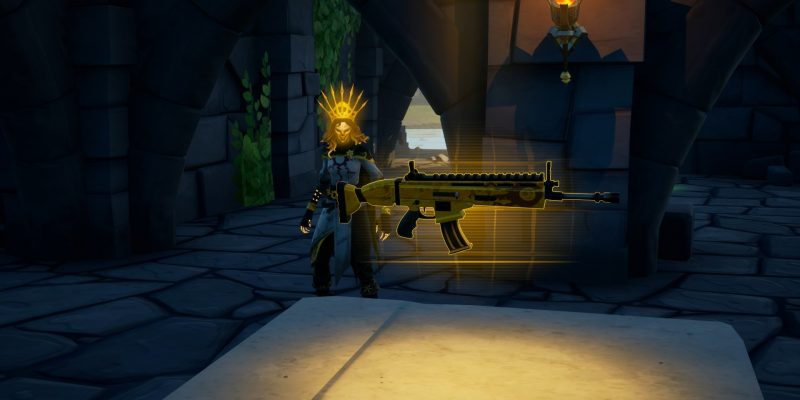 Since the beginning of Fortnite Season 6, Epic Games have been adding new content for players to enjoy. This comes in the form of challenges, new exotic weapons and more. Also, this Fortnite season introduced Lara Croft to the battle royale. This came in the form of a modern outfit and a 1990’s version. Now, a new alternate skin for Lara Croft is available for you to unlock that is gold. You may recognize the skin, as it was previously leaked as the Lara Croft Gold Anniversary skin. The wait for the skin is over and you will have to follow some steps to unlock it.

Firstly, before you hop into a match, make sure that you have the Lara Croft skin equipped. You will have to pay a visit to the new island that has appeared to the south of the map named Isla Nublada. Once you arrive, search for the NPC named Orelia, who will be in the ruins. You will notice that on the table next to her, there is a gold scar assault rifle. Picking up the weapon will transform you into the golden version of Lara Croft. From that point onwards, the skin will be unlocked and available to equip in your locker.

Fight it out to unlock the gold Lara Croft in Fortnite

It is important to note that when you pick up the gold scar, the NPC Orelia will become hostile. In this situation, you can either escape the island or fight back. In addition, the player who picks up the weapon first will be the only one that is rewarded with the skin. Therefore, you may have to fight off other enemy players who are trying to unlock the gold Lara Croft skin.

It is definitely worth unlocking the gold skin variant to show off in your Fortnite matches if you are a Lara Croft fan. If you are looking to unlock more alternate skins, you can unlock a skin for the character Raz by completing the Spire Quests.