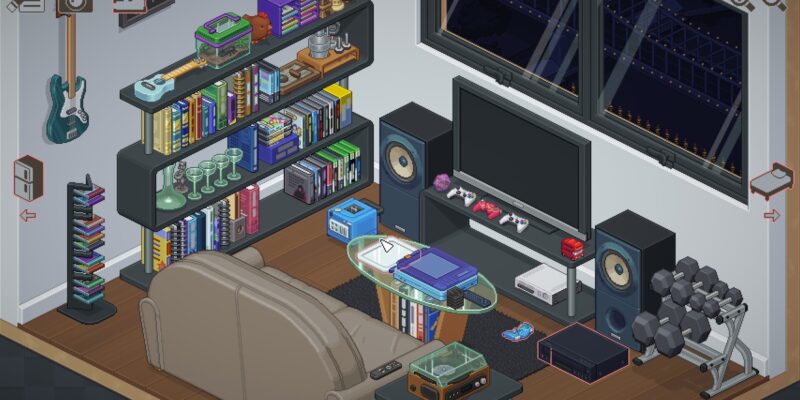 I was initially shocked to see that someone made a puzzle game about unpacking after a move. We’ve all had to unpack and, while there is something to say about the satisfaction of putting everything just where we want it, it’s not something that many people would do for fun. But Unpacking finds a good balance between the tedium of the real thing and the Zen, pragmatic nature of the game. There are a few hiccups along the way that make things less smooth than they might have been otherwise. But the game does exactly what it set out to do, even if I wish it wasn’t so needlessly picky in spots.

Unpacking, unsurprisingly, doesn’t have a story. Not really, at least. We follow a woman’s moves from her childhood to when she moves into her final house with her spouse and children. There are eight locations in all, starting in her room as a kid in the late ’90s. The neat thing is how much we learn about her based on her personal effects. She’s an avid gamer and an artist, for instance. As you play, you unpack newer, better game consoles and digital drawing equipment. You can even glean small details regarding religion and the like.

This is a short game, so don’t expect to spend hour after hour moving. I finished it in about three and a half hours, which I thought was as long as it needed to be. The last section was kind of maddening in spots, but I’ll get to why that is in a bit. When Unpacking begins, it starts you off gently. You’re only unpacking for a single child, so all you need to worry about is her room. But as she gets older, houses get more rooms, and the boxes start piling up. 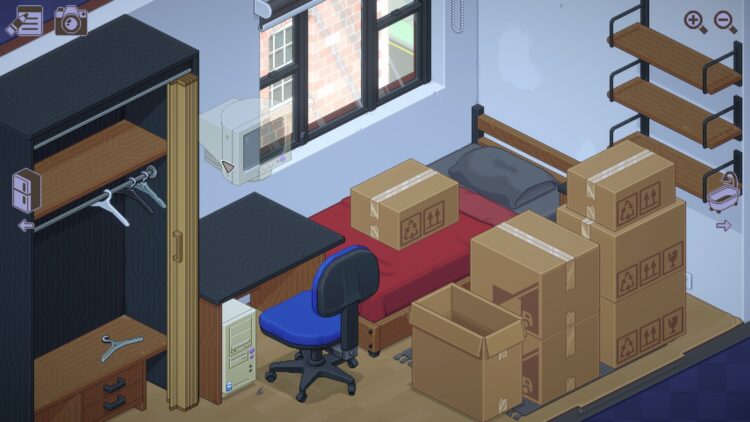 “Oh, great! A bunch of boxes to unpack!” – Literally no one ever

Life as a house

As you’ve likely surmised, houses have bedrooms, bathrooms, closets, living rooms, dining rooms, and kitchens to stock up on furniture and appliances. Each room will have a certain number of boxes in it, and the contents of those often correlate with the room in which they’re placed. Not always, though. There are occasionally times where items will need to go to entirely different rooms. Later, more complex homes are broken into two sections, which is helpful, as they can have an upstairs and downstairs. The final house has about 10 rooms. When this happens, all the stuff you moved in the previous section will be right where you left it, which makes it feel like you’re actually shaping the way the house is coming together.

Each box in Unpacking starts off closed. You click on it to open it. Subsequent clicks will grant you a single item and from there you’ll have to simply put it down. You’re obviously going to want to put things where they go. Hangars go in the closet, and they’re (obviously) used to hang clothing. Books go on bookshelves and can be placed against each other just like the real thing. Many items can stack. Your initial goal in each section is simply to empty all of the boxes and place their contents within the home.

Once that’s done, you click the box and it folds itself up and vanishes. It’s quite satisfying. But after all the boxes are gone, that’s when the puzzle elements really kick in. Any items deemed to be in the wrong place will flash red. You need to rearrange the way you’ve unpacked everything to get it all in an acceptable spot and finish the move. This probably sounds extremely easy and, while it is sometimes, there are occasions when that is absolutely not the case. 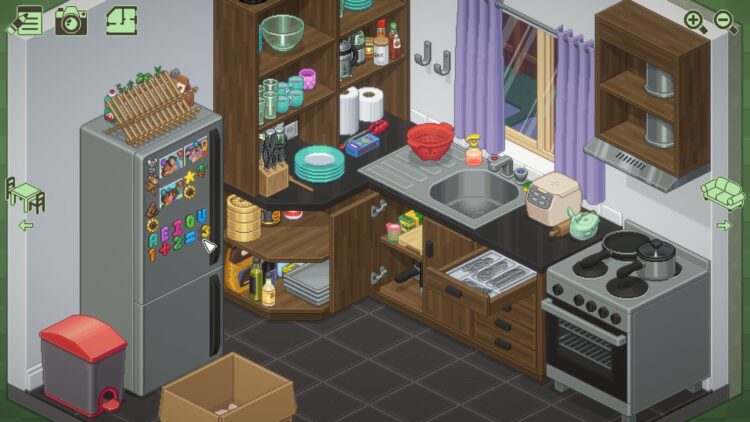 Before you ask, no, you can’t put anything behind those pots on the stove. That space is unavailable.

Certain items are bulky, so you’ll have to move them and do your best to position them so that you have the most space. It’s easy to put something down and not realize that you didn’t place it far enough back or all the way to the side, which will stop you from being able to place certain objects. When you have multiple rooms to deal with, this becomes trickier and trickier. Some items can go in more than one room, so you’ll need to experiment in order to find the best place for it.

But this is where Unpacking‘s issues arise. First off, items aren’t always logical in regard to what surfaces they can be placed upon and how much room they take up. There will be plenty of times where you’ll go to put an item down on a surface where there’s clearly room for it, only for the game to refuse to let you put it there. Many items can be rotated, but they can’t always be rotated in a way you might want them. You’ll essentially have to waste space simply because the real-life application that you’d assume would work just doesn’t.

The bigger issue, though, is that Unpacking doesn’t tell you what items are. If you take an item out of a box and have zero ideas as to what it is, it can create a major headache. Maybe you’ve never seen an item in your life, or more likely, it just isn’t quite clear what the item is due to the fact that it’s a tiny sprite. The worst part of the game is being down to the last few items without the faintest clue of what they are or where they should go. This leads to randomly putting it down everywhere you can think of until the game gives you the green light. 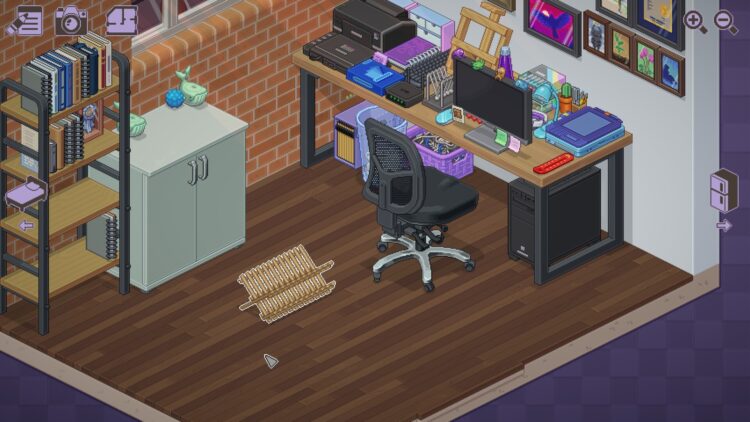 It took me way too long to realize this was a wine holder. I don’t drink wine, Unpacking! I work for a video game website!

Unpacking is often unnecessarily rigid in regard to where things are allowed to go. Say you have a potted plant and you think it’d go nicely on a shelf near a window. If it wasn’t specifically programmed for that to be an okay spot, you can’t finish the level if it’s sitting there. Why? Because reasons. A lot of the items in the game follow this “logic.” There will be plenty of times you can’t put something somewhere even if it would normally go there in a real house.

In the final section, I had one of those containers in which you store umbrellas and canes. These are often right by the front door so people don’t carry wet umbrellas through the house. But Unpacking wouldn’t let me put it by the front door. It wouldn’t let me put it in the living room, either. I had to put it in a specific bedroom. Nowhere else would work. This isn’t a frequent occurrence, but it happened enough to get on my nerves. I don’t really understand why this Zen unpacking game needed to be so picky about where items were placed. Granted, there’s an option to allow items anywhere, but that pretty much removes all of the challenge, which isn’t really a solution as much as a different experience altogether.

Regardless, I enjoyed my time with Unpacking overall, and I think anyone sold on its premise and charming visuals will feel similarly. The above issues, while quite annoying, were never enough to actually sink my time with the game. I am, however, still a bit miffed that it took me so long to realize that what I thought was a bathmat meant to go directly by the bathtub was one of those that needed to go inside the bathtub. Wear the grudge like a crown of negativity. 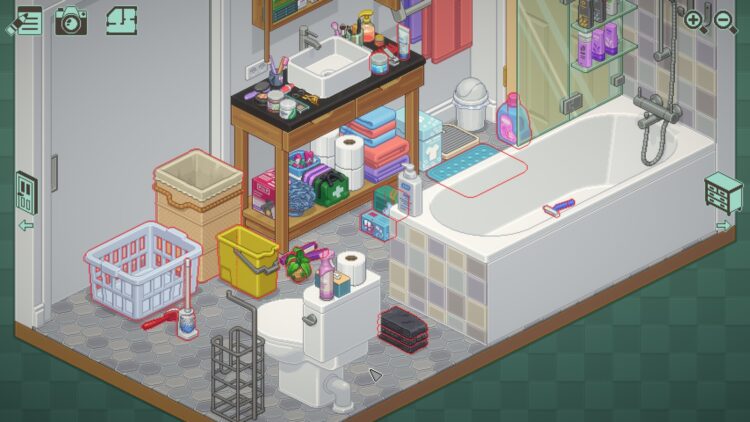 I mean, look at that. I thought it was a mat you were supposed to step on. Never have I seen one of those things in a tub before.

Cute, charming, and surprisingly satisfying, Unpacking scratches an itch that no other game attempts. But it's also too bossy for its own good at times.