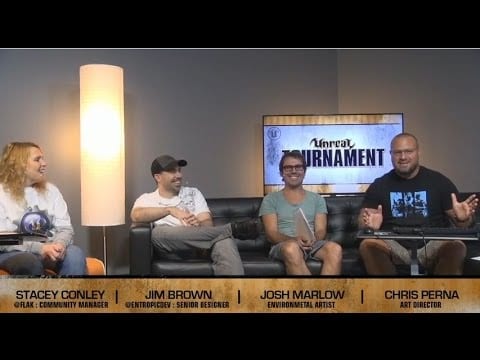 Yes, I can see myself shooting at people in here.

The team behind the new Unreal Tournament are sticking to their promise to release a lot of work-in-progress materials and design chat. Here, for example, is a 50 minute discussion of a ‘working concept art’ piece (okay, some of the time is devoted to community questions, but still.)

It’s quite interesting to hear a designer really dig into the ideas behind visual clarity in a map, having the players pop out from the white-but-dirty environments and so on. The inspiration behind this particular area is said to be an original Alien mining colony, 80s hard sci-fi type thing. It’s white, but not the clean Apple white. There’s grime everywhere and the place looks used.

This isn’t a finished map, the team are keen to remind everybody. It’s a sort of visual concept work in progress, showing the sort of thing that might be in Unreal Tournament eventually.

There will be “many different environments and colours” in the game, but this is intended as a “quality bar” to express a lighting quality and mood. You can read more (if you need more after 50 minutes of it) questions and answers about this video in the accompanying official forum thread.

If you missed the original announcement of Unreal Tournament, this older news post should explain what they’re aiming for with the structure and release process of this game (it’s a bit unusual.)

Wargame: Red Dragon’s free DLC is all about the Eastern Bloc