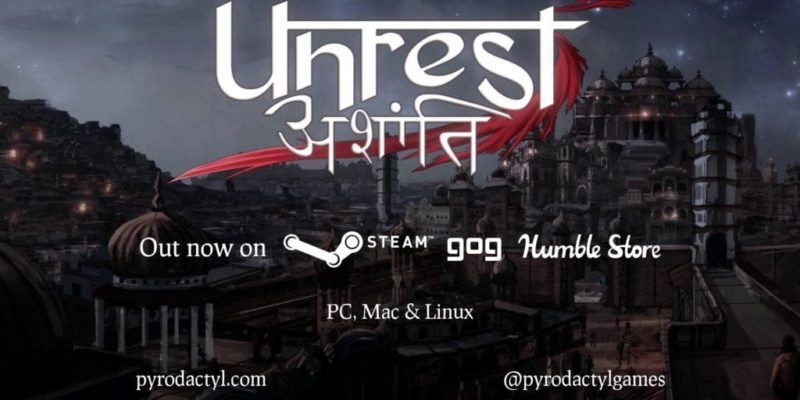 Argh I don’t know, these are all bad options.

I’m assuming it’s hot anyway, it is set in (a fantasy version of) ancient India after all. Unrest is the recent ethical dilemma talk-em-up from Pyrodactyl that I reviewed (and rather liked) earlier in the week.

This video is dubbed a ‘launch’ trailer, but the game is actually already out and available to buy. You see, the Unrest team doesn’t play by your conventional rules of marketing. Just like the game’s unique set of characters, they do things their own way.

There’s a demo at that link above too, if you just want to try it out before committing to any kind of purchasing decision. A demo! In 2014! You should take advantage of this rare opportunity.

Like the Paradox grand strategy games (maps galore,) it’s not exactly a game which benefits hugely from a trailer. The whole point of the title is walking around and talking to people, which is a bit different from the usual Inception horns and jump cuts drama of standard videogame fare. It’s far more engaging to play than to watch.

Still, you can click the video below to see all the nice things various publications have said about Unrest. IncGamers doesn’t show up, even though we said some nice things too, but it’s okay, we don’t hold a grudge.

TrackMania 2 and ShootMania get a 48 hour free access demo