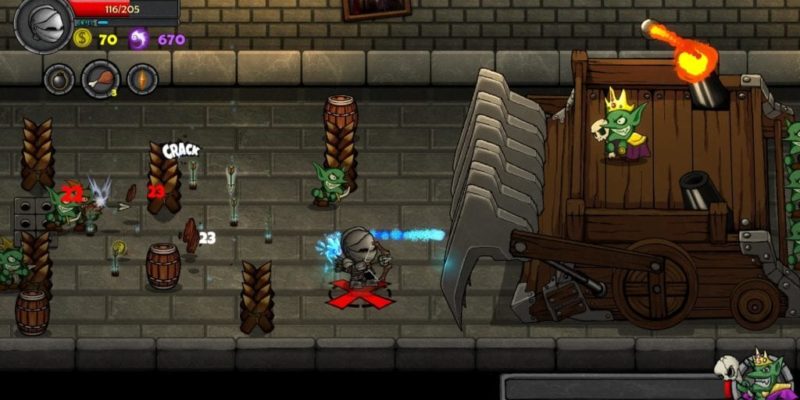 I’ve been playing a lot of things that I can’t or won’t review, so it’s about time for another Unreviewed. I’m still working out the format for this, so for this article, we’ll be taking a look at fewer games but in greater detail.

In case you missed the last article: Unreviewed takes a look at titles that, for one reason or another, we’ve played but haven’t reviewed. Our stringent review policy (all games played to completion) means we have to be careful with what we spend extensive time with – but there are plenty of games we play that we can nonetheless give some cursory impressions of.

Do note, however, that these are not reviews. They’re unscored. They’re thoughts based on limited amounts of play. At best, they’re guidelines as to our impressions after a few hours, and we’d ask you to please bear that in mind. 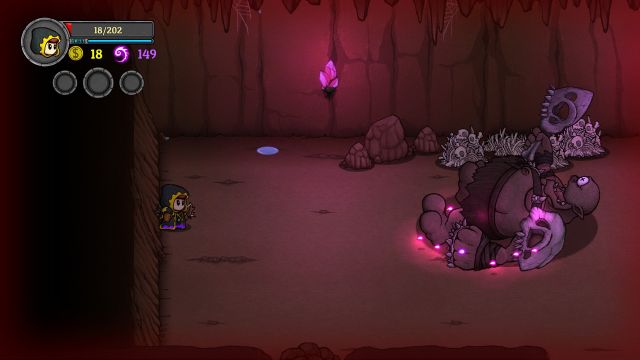 Everything can be beaten to death; some things just might require more health (or skill) than others.

First on the list is something I actually want to review, but don’t think I can. It’d require Many Hours, and for the best experience, it’d also require having someone with whom I could play local multiplayer. Still, I’ve been having an awful lot of fun playing solo. And frustration. Funstration.

In terms of boring pigeonholing, Lost Castle is somewhere between Streets of Rage and Rogue Legacy. You’re given a randomised hero, you venture into a level with a random layout, and you beat up monsters in beat-’em-up fashion. Different weapons vastly change your attacks and abilities, while passive items and consumables give you different bonuses and trump cards to use when things get messy. Then you die, and you use your earned points to upgrade your next hero, and you do it all again, because that’s how the fun/frustration of this sort of game works.

The roguelike/roguelite/roguelite-like-lite formula is one that’s very easy to get wrong, either by making things too punishing or too repetitive, but Lost Castle seems to get it pretty squarely right. The beat-’em-up mechanics work well, there are plenty of unlockables, and there’s an awful lot of variety in the weapon types. Not so much in the level layouts, but whether or not you encounter certain bonuses or useful rooms will change a lot of how your run goes. 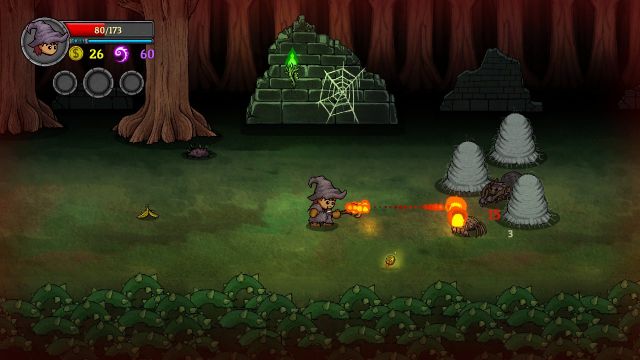 There are spiders. I suppose that’s a negative.

I’m not entirely convinced that everything works perfectly when playing solo (some of the melee weapons, in particular, seem pretty heavily focused on having someone else around to either draw attention or to interrupt foes with more powerful attacks) but that might also just be because I’m rubbish, and a few of them demand some actually skill. Still, while it’s perfectly playable solo, I get the sense that it’d be a lot more fun with someone adventuring alongside you.

The other potential bugbear is in how much it rewards grinding, which I can’t be too sure of. It’s certainly true that things get a lot easier as you unlock new bits and pieces and bump up your starting stats, but it’s also true that I managed an incredibly successful run due to getting some good items early on (in traditional roguelike fashion). The more I play, the more I start to figure out its systems and get just a little bit better.

In any case, Lost Castle is a side-on brawler with a heavy roguelike bent, and it’s one I can’t stop dipping into it thanks to its progression, variety, and one-more-go syndrome. It’s playable on keyboard (although I’d recommend a controller), and for £6.99, it’s quite probably worth a shot if it sounds interesting. I like it rather a lot.

The Warlock of Firetop Mountain 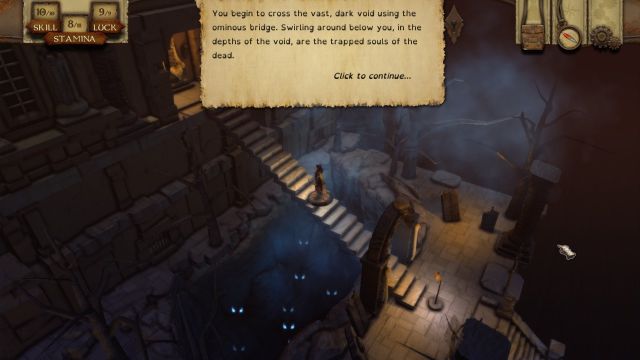 And it LOOKS ominous, too!

The Warlock of Firetop Mountain is one of the classic Fighting Fantasy gamebooks, but this digital adaptation caught my eye for one main reason: its presentation. Rather than being a direct translation with text and pictures and virtual dice-rolling, it presents the infamous dungeon as a full 3D map, with your character depicted as a little tabletop miniature roaming its halls. When you’re told you’re at a junction and can go down a well-lit corridor to the right or duck into the narrow, winding passage to the left, you can see these things and their relation to the rest of the dungeon that you’ve explored.

It’s hard to overstate how much of a difference this makes. Other than helping present the mountain’s monster-infested halls as a full 3D environment, it gives little clues through its visual details. And, of course, it’s one thing to read about a busy Orc training hall, and another thing to see your miniature hop in there and see the high ceilings and brutal-looking training devices for yourself.

The other big change to the gamebook (he says, although it’s been a decade since he’s played the book) is that combat is now an odd little simultaneous turn-based system. You move your figurine around a grid and attack certain squares, and the idea is to hit a square a monster is moving to rather than the one it’s on. Unless the monster is attacking, anyway, in which case you either want to move to a square it probably won’t hit, or attack it anyway and go for a die-rolling “clash” where your stats and your luck figure out if you or the monster take damage. It’s a fun system, and one I infinitely prefer to straight-up die-rolling. 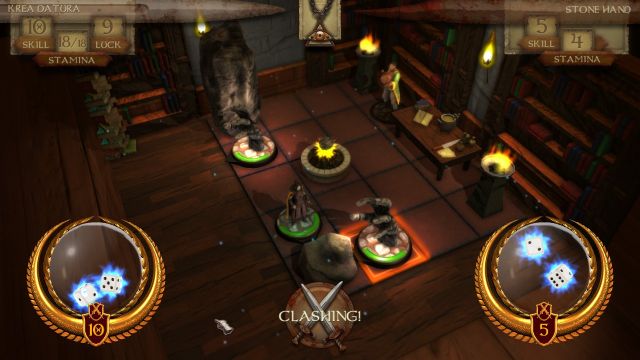 The worst enemies are those that attack and move at the same time. Fuck those guys.

You start with four selectable characters, each of whom have a subquest somewhere in the mountain (as well as different stats and different attacks), and the conclusion to each run earns you souls that you can use to unlock more characters. Checkpoints are scattered throughout the dungeon to make things a little less vicious, although you have a limited amount of “lives” before you’re forced to start over.

The biggest problems I have are the repetition and the price. While there are numerous paths through the mountain and numerous ways you can defeat or bypass its challenges, it’s still the same dungeon every time. The other issue is that its £15 price feels a little steep, at a glance.

On the other hand, if you consider that buying the paperback version would probably cost you £5, then £10 doesn’t seem quite so steep for this luscious visual upgrade, the new combat system, and the extra characters and side-quests that come with it. I’d caution you that it might get a little old a little quickly, but I can’t say I regret purchasing it.

A Matter of Murder 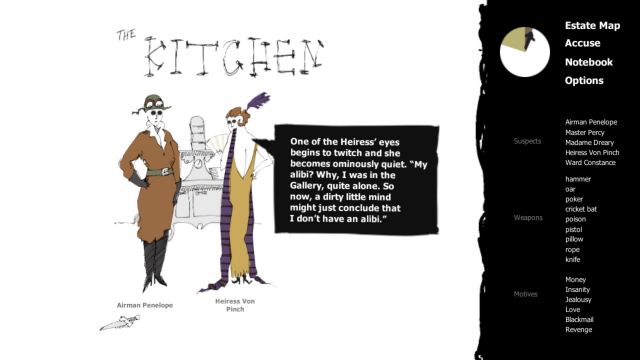 Fortunately for the Heiress, a lack of alibi is not a confirmation of guilt.

If I were to ever make a list of my favourite games that you’ve probably never heard of, I think Sleuth would turn up in there somewhere. An ASCII-based murder mystery from 1983, it had you investigating a mansion in which a dreadful murder had taken place. You needed to find the murder weapon, the culprit, and the room in which the murder had taken place, and use these three elements to determine whodunnit before the killer feels you’re getting too close and bumps you off as well.

It was basically Cluedo/Clue with a digital makeover, and it worked surprisingly well. Also, I just learned it’s apparently due for a sequel sometime in the next year. Excellent.

Anyway: A Matter of Murder is, intentionally or not, the spiritual successor to Sleuth. You’re in a mansion. Someone’s been killed. You need to figure out the who, the how, and the why, and then finger the culprit before either the police turn up and bungle things, or the killer gets away.

You do this by moving around the mansion, examining suspicious-looking objects, and questioning people, all via a simple point-and-click interface. Moving is “free”, but everything else will cost you time, and time is not on your side. 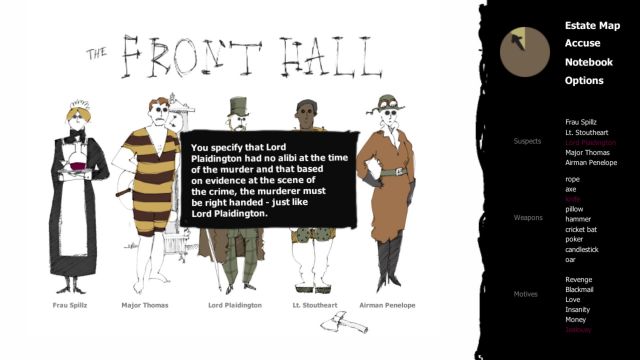 The little grey cells are what matters.

Where things differ is that A Matter of Murder has a greater range of scenarios for its murders. Some might just rely on finding out whose alibi doesn’t hold up, but others might have the murder weapon wiped clean, forcing you to determine it based on whether the weapon was heavy or light, blunt or sharp, large or small. Maybe sound will play a role, or perhaps more people will be bumped off as the night progresses.

You can change the names of the characters to those of your friends to personalise the game, and you can randomly generate a scenario to play out. The downside is that, once you’ve figured out which scenario you’re in, you usually have a pretty good idea of what you need to do. Bad luck can also ruin things for you (if someone crucial is being uncooperative, or the murder weapon is the very last item you examine, for instance) but a scenario shouldn’t take more than five minutes, so it’s hard to complain too heavily about that.

I’m probably pretty biased towards A Matter of Murder simply because it feels like an updated (albeit slightly different) Sleuth, but at £1.99, it’s not a particularly expensive punt. It’s got a few little bugs with regards to saving audio settings and its art style is certainly on the minimalistic side of things, but I rather like it nonetheless.

Also, maybe it’s just me, but I actually find the art style supremely creepy. Judge for yourself. 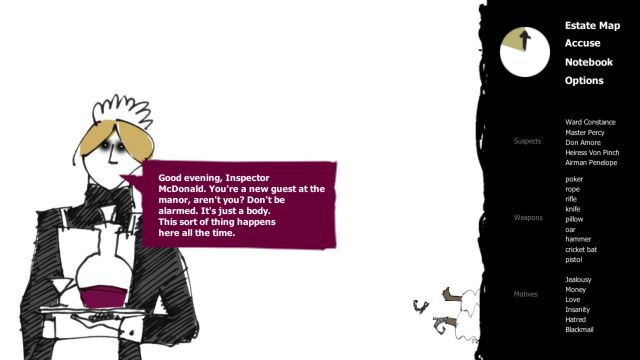 Civilization VI shows an hour of Norway, Spain and religion

By Jason Rodriguez11 hours ago
Interviews