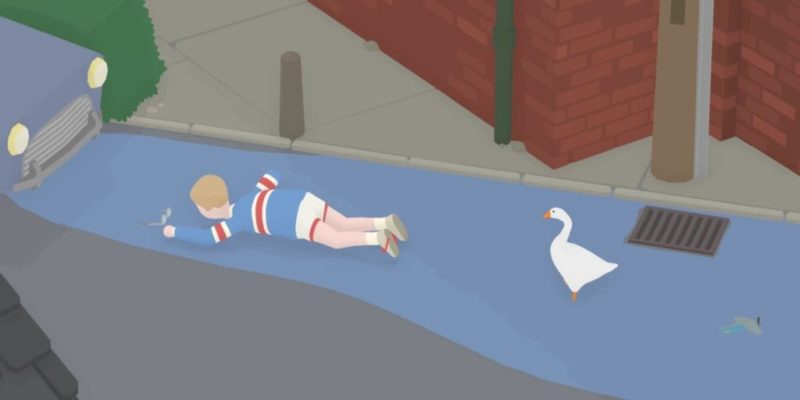 It feels like it’s been forever, but Untitled Goose Game is finally – finally – here. And it’s still without a title, according to the developers.

In many ways, I feel like it’s a game that was designed specifically for me. Players take the role of a goose in a lovely, picturesque village. It is your mission to annoy everybody and ruin things. You have a dedicated HONK button. As someone who is (allegedly) responsible for annoying people and ruining things, what could be better? 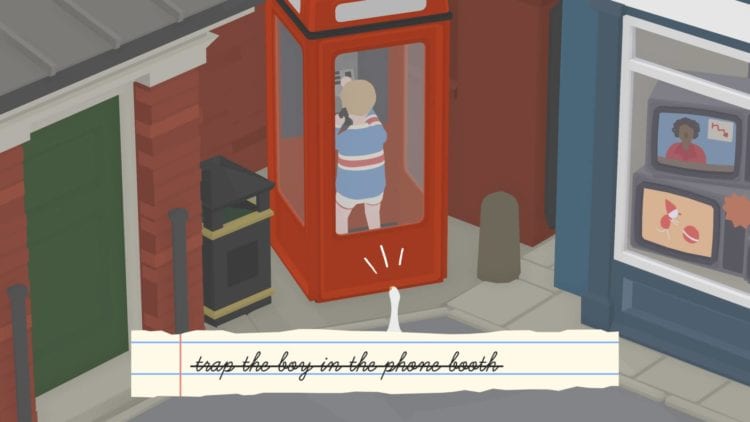 If you’re old enough to remember some of the single-screen Flash puzzlers or the weirdness of the Gobliiins series, then Untitled Goose Game might feel a bit familiar. While it’s less obtuse than those – and presented more as an open game – it’s really quite similar in raw mechanics. You don’t have an inventory and instead need to mess around with whatever’s in the area to see what it does and how that can help you out.

You’re given a to-do list in each area, and every objective on it is to do with that area. No backtracking or skipping ahead needed. As you have no inventory, most of what you do is waddle around, honk, flap your wings, and maybe attack things with your beak or drag them around and see what happens.

Which is a really rewarding – and hilarious – process. Some goals are simple: trapping a kid in a phone booth just requires you to honk and flap your wings and chase him there. Probably while giggling and maybe feeling slightly bad. Others are more complex, like convincing someone to chop down a prize rose. At first, you’ve got no real clues on how to do this, so you interact with everything around. Maybe you’ll notice that if you attack a nearby topiary, the owner will come along to prune your glorious rework with shears, and from there… hmm. 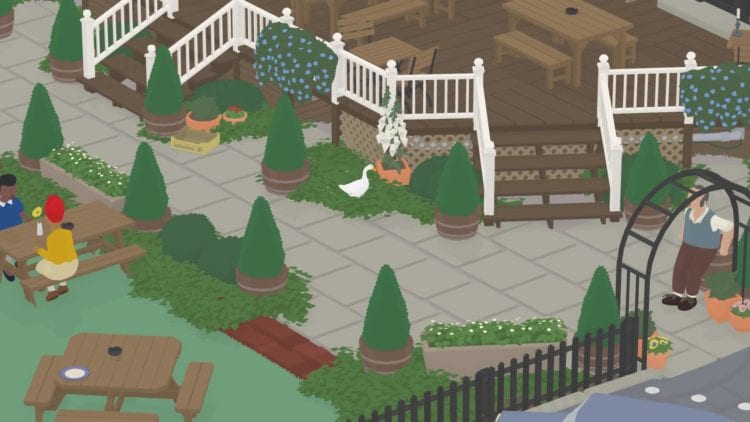 I have a particular adoration for the aesthetics of Untitled Goose Game. It’s visually striking, and the fairly minimalistic look works well. I can practically see the smug look on my untitled goose’s face after doing something horrible.

The audio follows suit, being both minimalist but perfectly fitting. Barring sound effects like thunks and clangs, the only “real” sound effect is your goose’s mischievous honking. Running results in lovely plonky piano chords, while being chased makes them faster and more chaotic.

What I love is the attention to detail in so many little ways, many of which are completely unnecessary for play. Honking while holding a harmonica in your beak results in, yes, a harmonica sound. It’s silly. It’s fun. And that’s what I want. 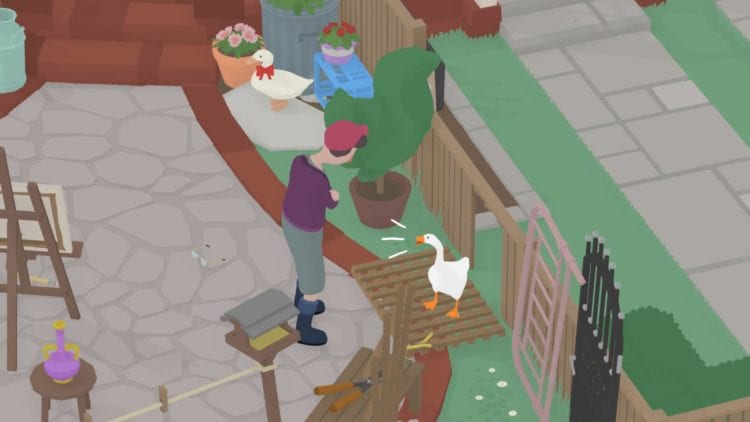 I’ve got a lot of respect for anyone who can just fold their arms when a goose knocks down their fence and honks at them.

The puzzles that make up your to-do list are mixed in quality, complexity, and frankly enjoyment. Every zone has a collect-a-thon quest of sorts, where you need to move items from one place to another. In the high street, for instance, you need to fill a shopping basket with items from a shop. It’s both easy and infuriating: Accidentally leading the shopkeeper to your basket means she’ll start transporting them back to the shop. There’s nothing much clever about it. It’s really just a slightly dull stealth back-and-forth.

On the other hand, more complex (or amusingly vicious) missions on your list are far more interesting. There’s at least one I still haven’t accomplished, but there’s a good mix between satisfying and just entertainingly horrible. Getting someone to hammer their own thumb is easy but funny because you’re a horrible goose. Figuring out how to get someone to smash a vase or prune a rose is trickier but rewarding to figure out. You don’t need to complete every objective to proceed to the next area, but the ones you don’t solve will peck away at your brainstem even after closing the game. 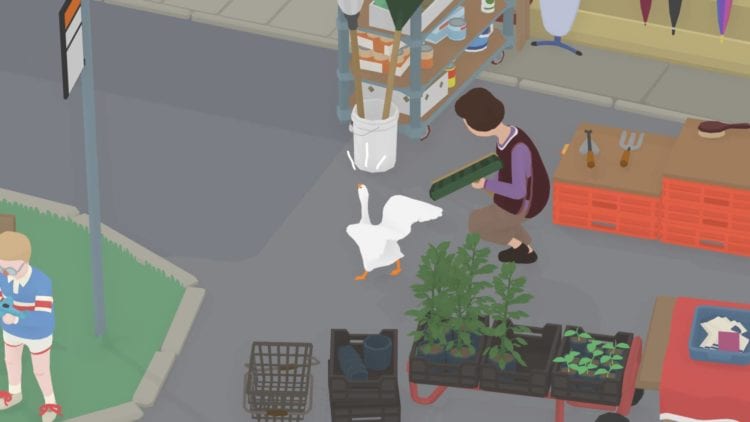 Some stealth is required to do your devilish goose deeds, but it’s not particularly taxing and everyone has a pretty set routine. No fail states either.

Which is where we come to my one big – and, frankly, only – issue with Untitled Goose Game. Depending on your skill level, it is incredibly short. There are five “areas” in the game, the last of which basically only exists to set up your final task. Depending on your skill at puzzle solving, you can be done with the main game in a couple of hours. Tops. Had I not managed to get stuck on one puzzle for a good 20 minutes, it probably would’ve felt significantly shorter.

The mitigating factor there is, of course, “the main game.” On completion, you wind up with another few pages of objectives. Two pages are full of brand new challenges spread across the entire village, many of which do require you to do things across the areas. One page is, essentially, speedrunning the previous objectives. Finally, there’s one for crossing off everything on the to-do list. I doubt there’s more after that, but it’s possible: Until I can finally figure out how to do That One Thing I’m Stuck On, I’m unlikely to find out. And I’m not sure I want to put in the time there. 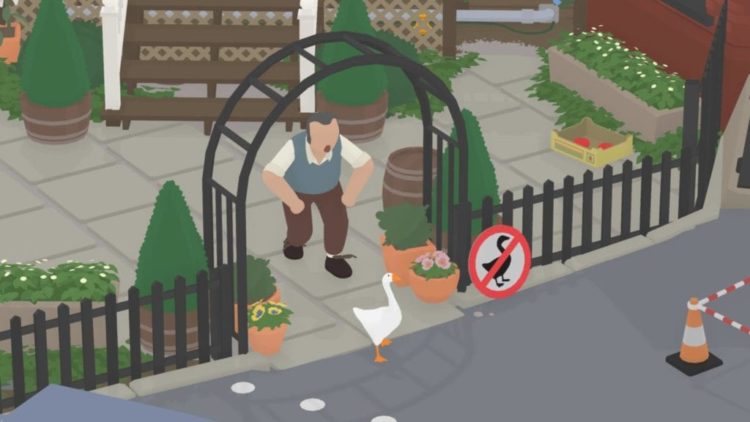 This leaves me with a bit of a quandary. I adore Untitled Goose Game; I haven’t cackled this madly in a while. Charging up to someone wings flapping and then honking at them so that they fall on their arse in surprise is joyous because I’m a complete jerk.

It’s also an excellent game if you’ve got someone sat with you. You can all giggle at doing horrible goose things, and you can share thoughts on how to solve some of the more perplexing brain-teasers. It’s also fun to pass the controls back and forth and be a group of horrible geese, manically giggling at the terrible things you can do. I want to spend an entire paragraph talking about all the awful, wonderful things I’ve done and how much they amused me, and that’s always a good sign.

But good grief, I wish there were more of it. The post-game challenges are nice and tie things together so that the village does indeed feel like one location rather than a set of discrete areas, but as a game, it still feels underwhelmingly short.

I love Untitled Goose Game. What’s here is largely great, and I’d be pretty content with paying $20 USD (or $15, with the launch discount) for the fun I got from it. And, yes, at some point I’ll go back and 100% it. But it’s up to you to ask if the price is worth a few hours of brain-teasing, honking, feathery joy. If you don’t have people to share the joy with and you’re not going to go back for the extra challenges, it may not be for you.

The definition of short but sweet, except you're also short and a horrible goose. Possibly too short for some tastes, but an excellent and hilarious stealth-puzzler nonetheless.