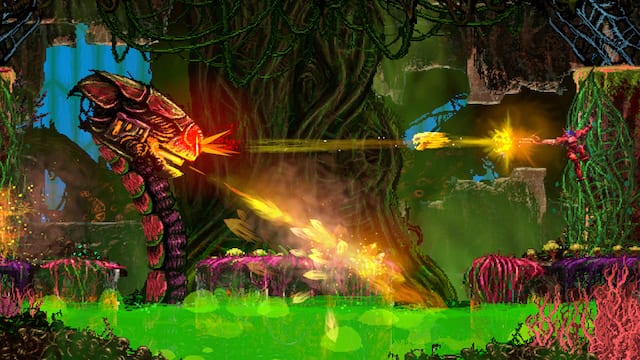 As if the run-and-gun shooter Valfaris weren’t tough enough before, a new update somehow makes it even tougher. The developers at Steel Mantis, alongside the publishers at Big Sugar, have revealed a new update. Titled Full Metal Mode, it essentially adds a New Game + to the colorful, rockin’ indie shooter.

Light your lighter for this tribute to New Game+

With the mode, players will have their skills taken to the max through “various aspects of gameplay,” according to the press release.

Players will notice that enemies now have even more health, along with ruthless attacks and aggression over their previous versions.

In addition, bosses now receive the same buffs and carry additional attack patterns. These enable them to try something new on you that you haven’t seen before. You’ll also notice that the Therion takes more damage.

Fortunately, your character is prepared for the situation. Along with being able to carry over any weapons and upgrades from the main game, there’s more. A new Destroyer Class weapon is available, destroying pretty much everything in its path. And there’s a new Achievement to, ahem, gun after in Full Metal Mode as well.

The update is available free of charge, ready to download the next time you start the game up. Just be aware that the mode remains locked until you beat the main game at least once. After that, though, the sky’s the limit, and you can test your skills to their very core. Good luck, though — you’re going to need them with Valfaris.

Check out the trailer for Full Metal Mode above, and check out Valfaris now, available at Steam. It’s actually on sale right now, 30 percent off its normal price. (This applies to both the standard and Digital Deluxe Editions.)

So… who’s ready to rock all over again with Valfaris?

Sword Art Online Alicization Lycoris will release in May 2020