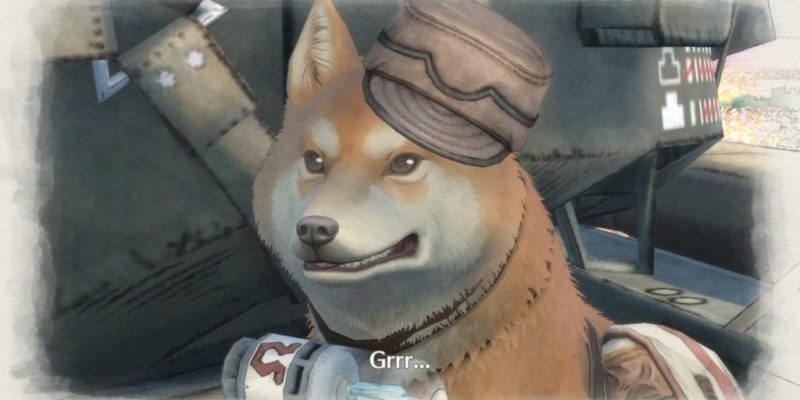 A few years back I never thought I’d get to write “Valkyria Chronicles 4 is getting a simultaneous PC launch” but that’s the brave new future we live in. The series – previously a Sony stalwart, with releases on PlayStation 3 and PSP – made a brief hop to some other systems with Valkyria Revolution, plus a PC re-release of Valkyria Chronicles in 2014. But now? Now Sega is launching a surprise attack on the land of Simultaneous Release, probably thanks to the original doing so well. I welcome this invasion.

Let’s look at some options, shall we? 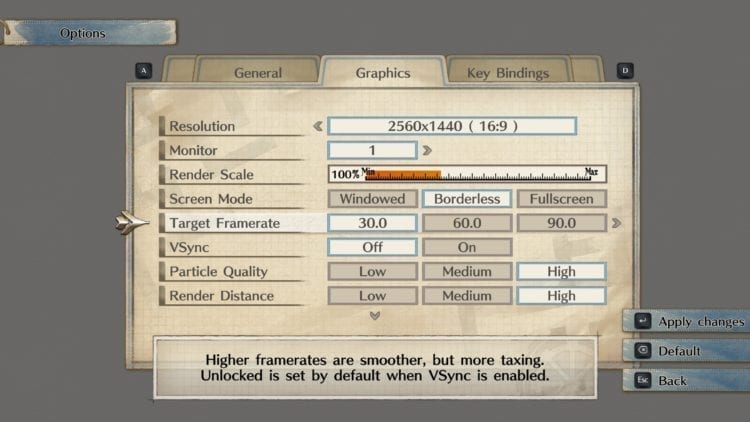 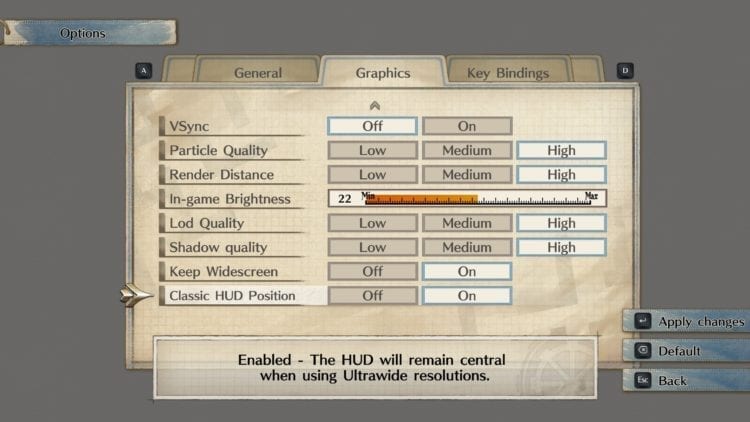 That’s your lot, for graphics. I think Target Framerate is mildly misleading; rather than adjusting settings on the fly to hit that framerate at the minimum, it seems to simply cap the framerate at what you choose (and thankfully, you can also leave it unlocked). Resolutions go down all the way to 640×480, and if you’ve got a monitor capable of supporting them, they can breach 4K and ultra-widescreen resolutions.

The other options aren’t much to write home about, although there are nice nods to those with ultra-widescreen displays. Most of the Low/Medium/High options are fairly standard, and there aren’t any discrete anti-aliasing options to speak of. The flipside to this is Render Scale, which can apply anti-aliasing by supersampling. To explain without dipping into heavy jargon: it runs Valkyria Chronicles 4 at a higher resolution than you’ve actually chosen, and then shrinks it down to your resolution, using all of those lovely extra pixels to help calculate the way it should look and smoothing everything out. Intensive (because it’s running the game at a higher resolution) but theoretically prettier.

So, with all of this in mind, how does Valkyria Chronicles 4 look? How impressive is it with all visual snazziness turned on, compared to the bare minimum? 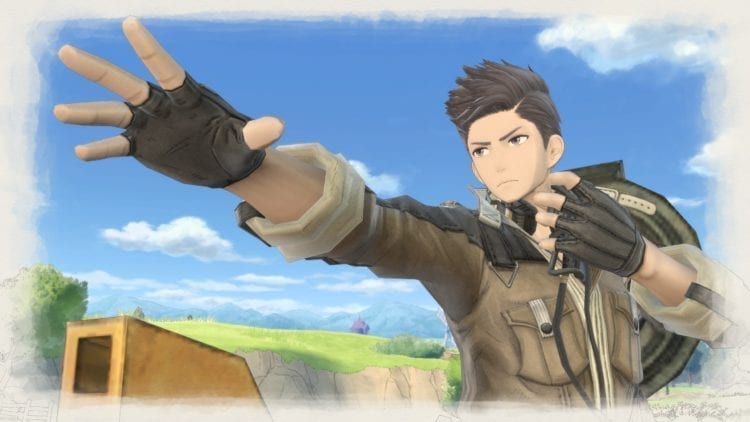 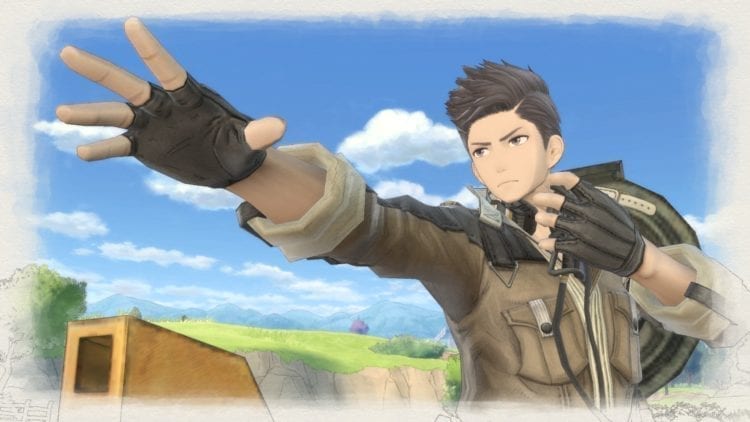 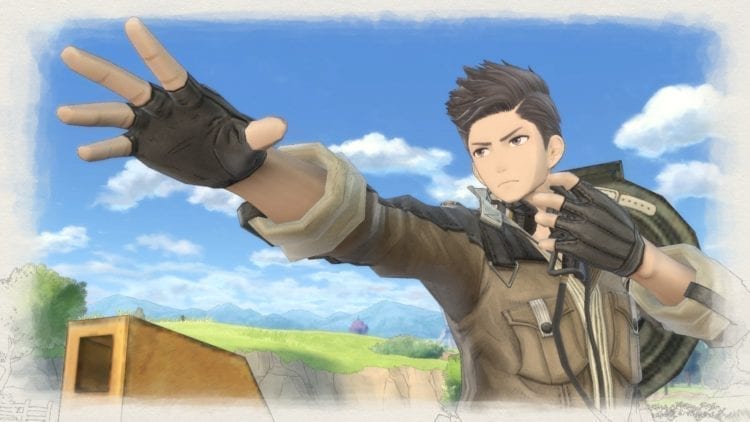 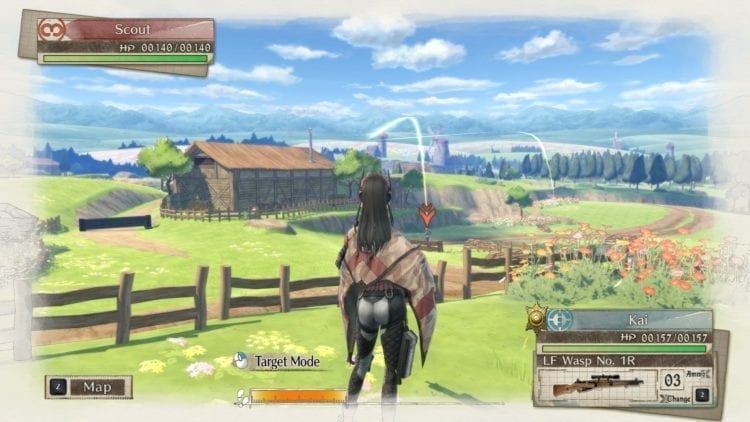 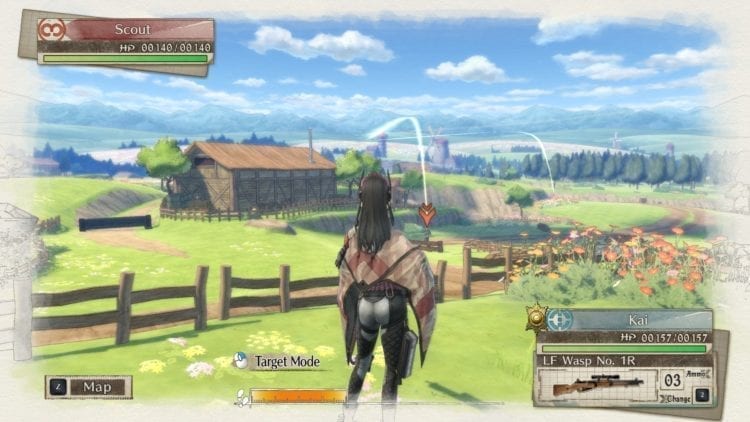 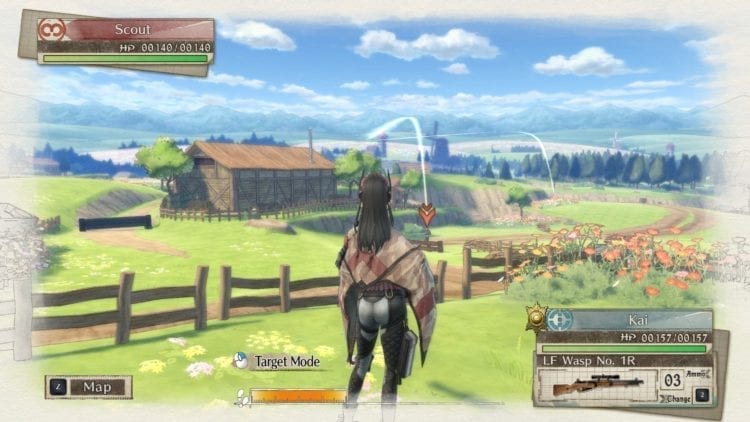 I’m going to be brutally honest: I can barely tell the difference between any of these. Bear in mind that shading differences may simply be down to cloud movements. LoD Quality (how close you have to be before it starts rendering something in higher quality) may make a difference in bigger maps, where you have scouts spotting units for your snipers, but in the first four chapters, it’s made no discernible difference. This is probably down to how stylistic the game is: the hand-drawn, water-color painted look, with screen borders converting the visuals into pencil lines, makes it look gorgeous no matter what you’re running it on. This level of filtering makes specific details harder to make out.

As proof of this point, a bunch of the screenshots on this page are taken with everything on High, while others have everything on Low. Good luck telling the difference in the ones I haven’t marked.

The one thing that is noticeable is the way static images are displayed when you have supersampling turned right up. This is most noticeable on victory screens, but in these shots, check the HUD in the lower-right. I suspect these are images created specifically for 1080p, so they look a lot more jagged on high resolutions – but supersampling helps mitigate this somewhat.

Supersampling is also the only thing I’ve noted as having any real impact on framerate. In fairness, I’m running a GeForce 1080Ti. I’m not expecting framerate trouble with Valkyria Chronicles 4, even at 1440p. The tutorial mission (which is largely what the comparison shots are from, for consistency) tended to run at about 110 FPS with everything turned up to full, and the Render Scale set to 100%. Dropping Render Scale to 50% and turning every setting to low only gave around 125 FPS. Meanwhile, bumping the Render Scale to 200% slammed that down to about 75 FPS.

For a laugh, here are some comparison shots with the Render Scale at 50%. 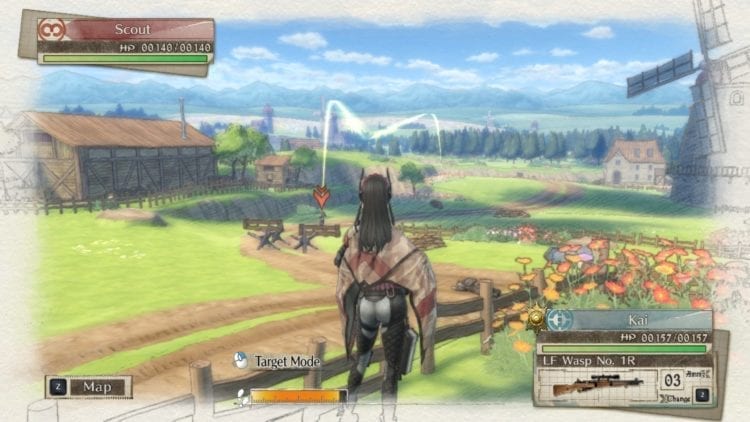 50% Render Scale makes it look like someone’s slapped a massive blur filter on the game. 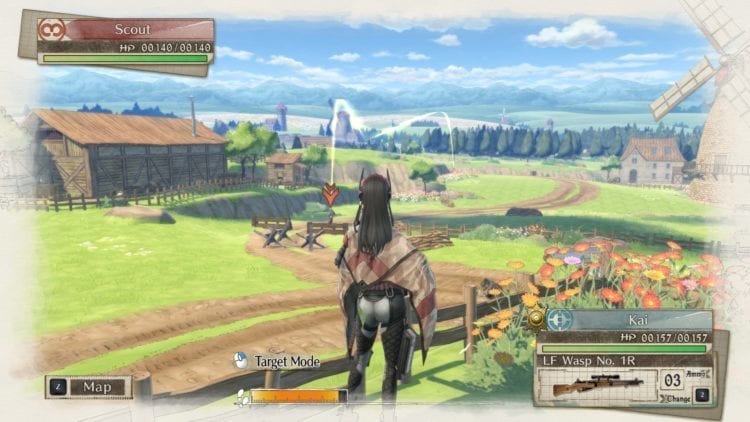 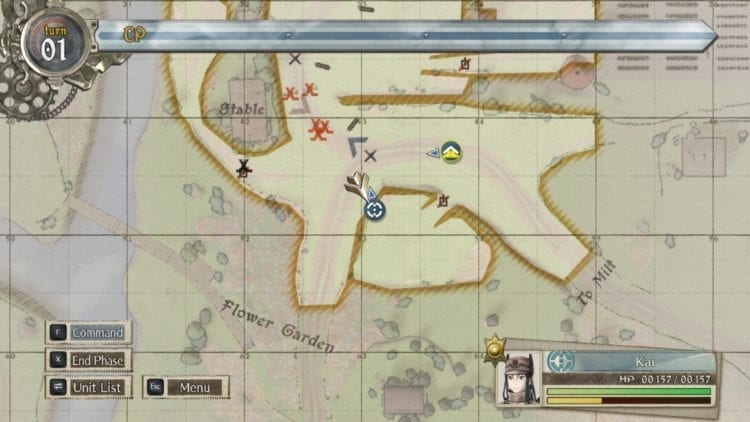 Yes, dropping the Render Scale to 50% even makes the map look rubbish. 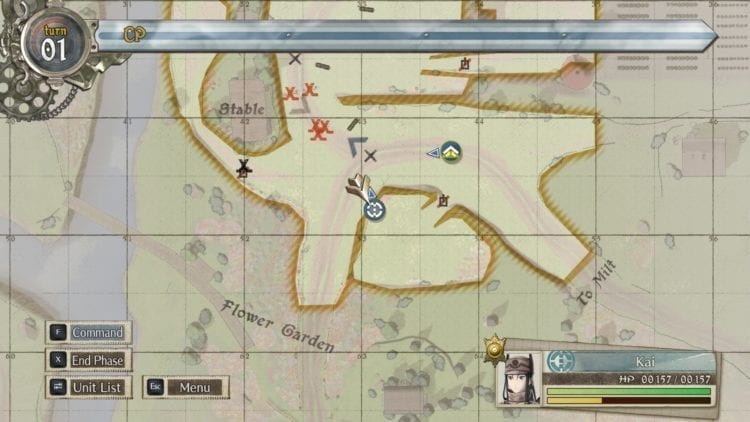 The framerate doesn’t change much between settings on even some of the more demanding missions. Chapter 3 is set in a rainstorm that seems quite system-intensive, but this ran at around 60 FPS regardless of supersampling.

The upshot is that I’m not entirely convinced Valkyria Chronicles 4 is particularly scalable, but I don’t think that’s going to be a huge issue. The published minimum specs are incredibly light (an Intel i3 6100, a 2GB GeForce 650Ti and 4GB of RAM) but even assuming those are the absolute bare minimum you need to just reach the title screen, I reckon most mid-range gaming rigs should be able to play this at 1080p just fine.

Valkyria Chronicles 4 doesn’t seem to be a particularly intensive game and, considering it’s a turn-based tactical RPG, even wavering framerates shouldn’t cause too much of a problem.

The third important part of “is the PC version good”, after how it looks and how it runs, is how it controls. With Valkyria Chronicles 4, the answer is “very naturally.” 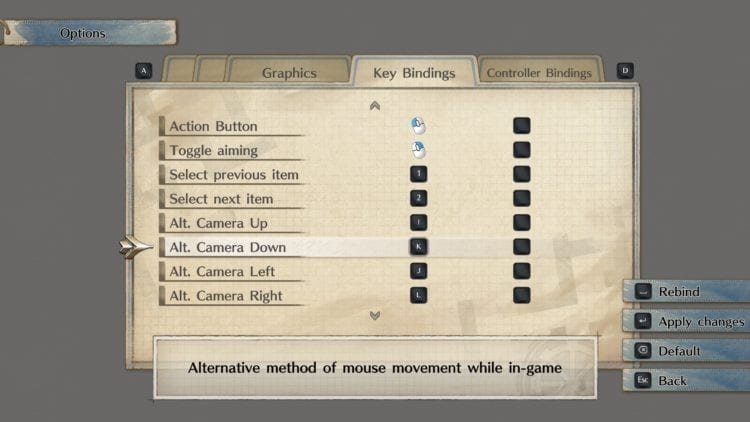 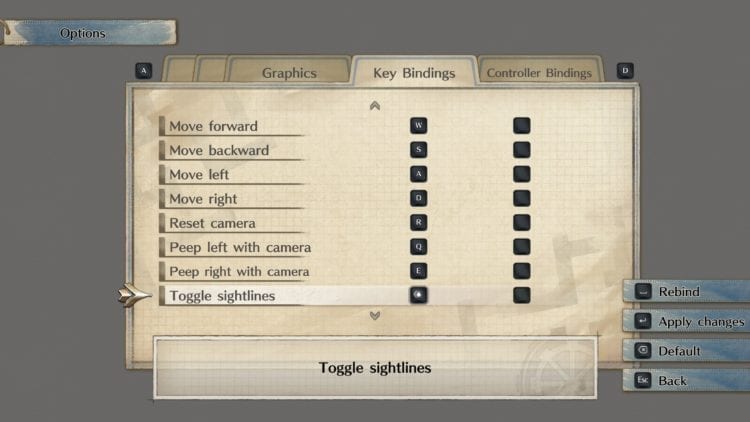 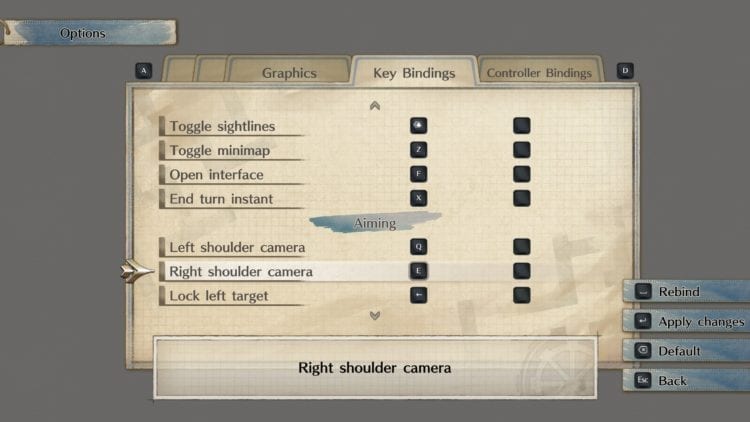 (These are divvied up into General, Movement, and Aiming, but I thought I’d spare you more screenshots.)

Okay, yes, some fear is understandable. If you’re a true scholar of awful PC ports, you probably noticed IJKL being bound to “Alt. Camera” movement. The key word there is “Alternative”, though: the mouse is fully supported and entirely recommended.

Equally, mouse and keyboard controls are fully redefinable. Additional mouse buttons can be set up to whatever action you like; I found setting my side-buttons to lock targets quite helpful. Tutorials and UI elements all show the appropriate keyboard and mouse binds, and even common slip-ups with ports – like menus not supporting mouse cursor movement – are avoided here.

It’s not quite perfect. A lot of the sub-menus (especially the chapter-selecting “book” menu) are designed with gamepads in mind, and it’s occasionally preferable to navigate them with the keyboard, but there’s full mouse functionality present regardless. You’re also going to have to fiddle with sensitivity a bit because the default camera movement feels incredibly sluggish if you’re used to playing any sort of third-person game on PC. 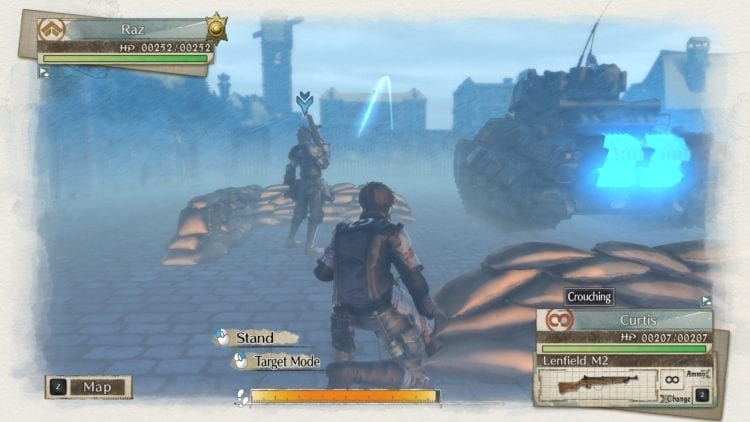 Environmental effects like fog look utterly stonking with the pencil-like shading. You might not even mind the camera movement.

One slightly more important complaint comes on the field map. We’ll get onto the specifics of how it plays shortly, but Valkyria Chronicles 4 lets you select which character you want to directly control by clicking them on the map. The mouse positioning for this is incredibly finicky; the sweet spot appears to be on the upper-left of their icon, rather than in the center. This took a little getting used to, but there are keys available to rotate through your selections and snap directly to them.

As an aside, if you want to use a gamepad, those are fully supported. By default, it’ll show Xbox controller buttons, but it recognized my DualShock 4 and switched to PS4 prompts as soon as I plugged it in.

That said, I actually vastly preferred controlling Valkyria Chronicles 4 with mouse and keyboard. The default controls are superb and feel entirely natural: WASD to move, mouse to control the camera and cursor or to aim, X to end my turn, and so on. These controls make sense and don’t require the use of a third hand. They rarely even require you to move either of your hands to hit distant keys. 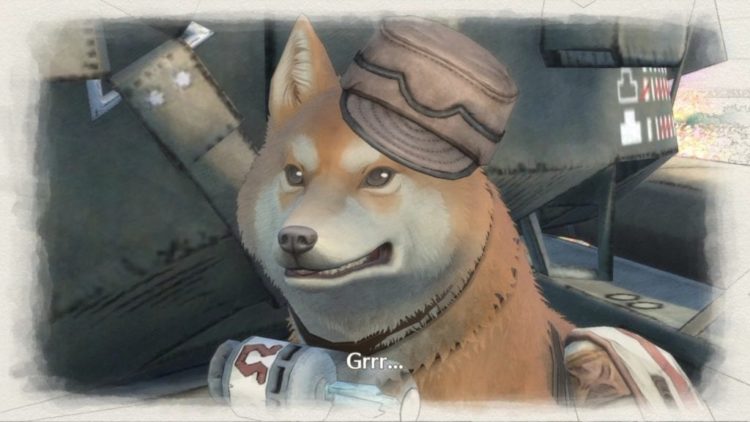 While this isn’t a review, I do want to talk about my time with the game’s early chapters and give you a brief outline of how it works. The simple description is “Anime World War 2”. The definitely-not-fake-Europe continent of Europa has been thrust into a war between the Federation in the west, and the Empire in the east – and yes, we’re back in the same timeframe as the first Valkyria Chronicles.

The first game focused on the war in the nation of Gallia immediately following Imperial invasion. In Valkyria Chronicles 4, we’re on a true offensive for the first time, leading a squad deep into Empire territory.

I could flippantly call it Band of Bishounen, but that’d be doing it a disservice. Yes, it’s heavy on the anime tropes and melodrama (and very heavy on the cutscenes), and there’s some mood whiplash between character banter and then horrible war stuff like scorched earth tactics and civilian casualties. But it’s decently written, and there’s a lot of tasty meat to the gameplay. 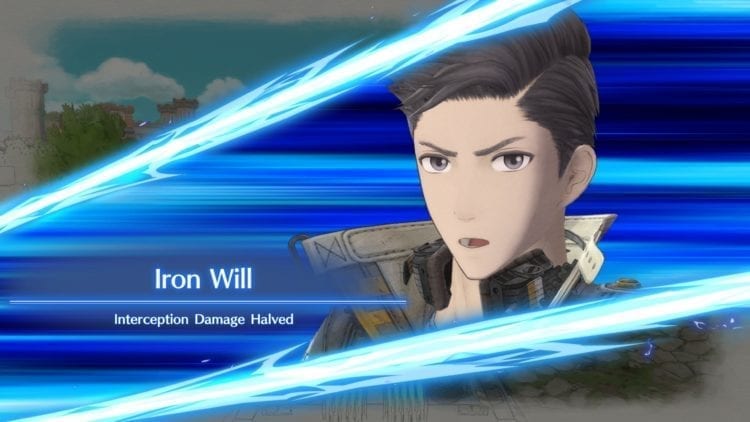 It is very anime, right down to the flashy cut-ins when a unit’s Potential kicks in.

As noted, Valkyria Chronicles 4 is a turn-based tactical RPG, but with a few twists. Battles play out according to Command Points. You use these to take direct control of your individual soldiers, move them into position, and fire. If you want to use them again, you can use a second Command Point… but they’ll have lower AP (meaning they can’t move as far), and anyone with a particularly heavy weapon can only fire so many times per turn.

Still, this offers unique tactical opportunities. Barring standard stuff like sneaking scouts through the brush to spot targets for your snipers, you can – say – use a machine gun-wielding soldier multiple times in a turn, to rush behind enemy lines and gun down foes taking cover behind sandbags. The flipside is that when you’re in direct control of a soldier, enemies can also shoot back. Defensive positions matter. If you run full-pelt at enemy soldiers facing you, they will open fire on you, even though it’s your turn. Turn-based, then, but with some real-time elements.

Then there’s all the additional TRPG stuff. There’s leveling up, upgrading gear, and getting to know your squad. Every soldier also has unique “Potentials”, giving them extra character. One soldier has lower stats if she’s around men, as it makes her think of her husband. Someone else has lower stats if he’s around multiple friendlies, because of social anxiety. Everyone’s unique, and everyone likes certain other soldiers. It’s quite a thing to sort out. 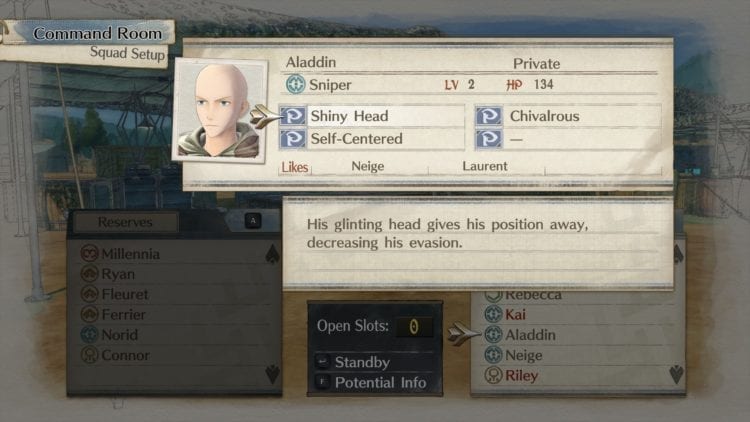 Possibly not too big a deal for a sniper. He shouldn’t be close enough to get shot at.

Bluntly put, I’ve played for about six hours while experimenting with the PC version, and I want to play more. Not an official endorsement of quality throughout, and I don’t have enough experience with the series to be burned out on it or to highlight a lot of its more specific changes that may infuriate others, but I’m having a bloody good time.

Finally, it has a Shiba Inu with a hat. The Shiba is (I think) in the Navy and is called Ragnarok. If that doesn’t pique your interest, I don’t know what will.

By Blake Grundman1 hour ago
Reviews