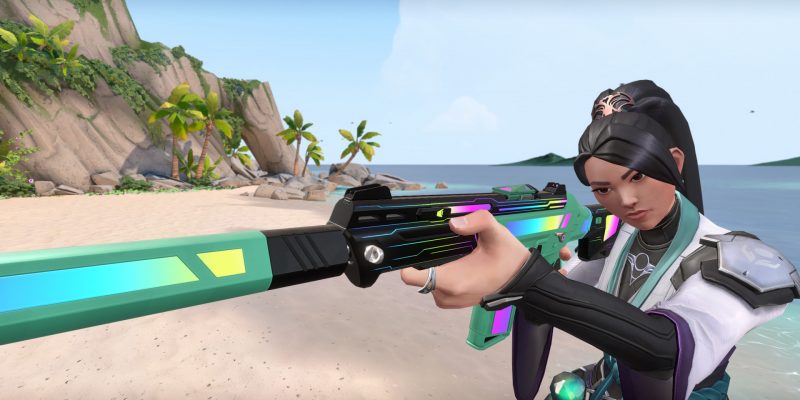 Valorant is off to the beach in Episode 2 Act III with the launch of the new Breeze map. In the latest gameplay trailer from Riot Games, you can take a tour of the beach-based arena, check out the cosmetics in the new battlepass, and watch the agents slaughter each other to a banging track.

If you missed the patch notes for Valorant update 2.08, you can check out our previous coverage. If you just want the highlights, here’s a recap. Breeze will get its own queue for two weeks. Tournament Mode Custom Games now have a slot for coaches. Weapon drops are now affected by Head Related Transfer Function (HRTF). And finally, if a player you report has action taken against them, you’ll be notified.

The new Valorant map is a Caribbean getaway. It features plenty of wide-open spaces, wider chokepoints, longer sightlines, and colorful murals. That last item has no impact on gameplay, but they are nice to look at. For the next two weeks, you can enjoy uninterrupted beach matches thanks to the Breeze-only Unrated queue.

It’s wonderful to see how much Valorant has improved its battlepass since the original one. There’s a lot of variety to the skins and, in my opinion, they look significantly better too. You can get a quick look at some of the skins in action in the trailer above.

The most notable cosmetic in the free rewards track is the Lightwave Frenzy, which has three color variations. In the paid track, you can look forward to unlocking the Lightwave Phantom at level 25, the Depths Vandal at level 45, and the Songsteel melee weapon at the end of the track. The battlepass also includes a bunch of sprays, gun buddies, and cards. But enough reading, the clock is ticking. Go battle on the beach.

Genshin Impact: What’s new in version 1.5’s “Beneath the Light of Jadeite” update?

Rumor: AMD no longer launching Zen 3+ or any refreshed Ryzen CPUs in 2021