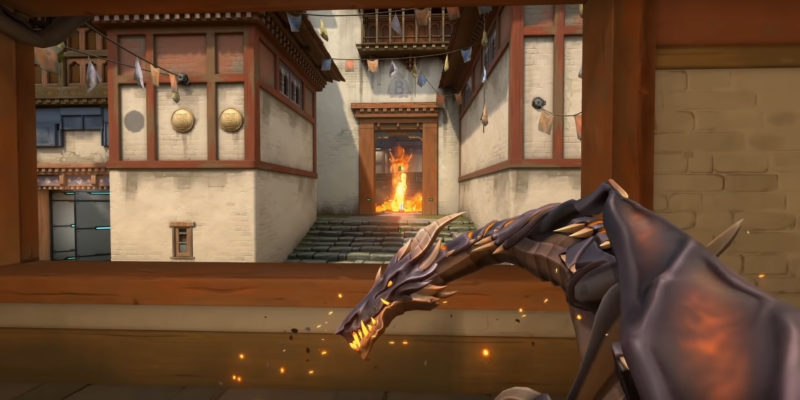 Along with the latest Valorant patch release, Riot Games also teased fans on Twitter with a brief clip of a dragon with fire smoldering around its mouth. It turns out the fiery face belongs to the tactical first-person shooter’s latest, and most pricey, cosmetic. Valorant revealed the new Elderflame weapon skins with a video showcasing the various guns the cosmetic applies to and its range of animations – of which there are many.

The Elderflame skins are unique and wonderfully detailed. The weapons that become the cute but ferocious dragon have bespoke firing animations, audio, reloads, and a fire-breathing finisher. However, such a stand-out value comes at a price. The Elderflame cosmetics are the first Ultra Edition quality in the game, which means each weapon you want to look like a dragon will set you back 2,475 Valorant Points.

That’s roughly $25 per skin. And the knife skin will cost you even more. From the video, it looks like four guns and your knife can equip the Elderflame skin. There’s the Vandal, the Judge, the Frenzy, and the Operator. So, you’re looking at well over $100 for the set. As with the Premium Edition cosmetics released so far, Riot will probably offer a discount for purchasing the whole bundle. But it’s still a large investment for pixels on a screen. Such is the true cost of free-to-play games.

The Valorant Elderflame weapon skins will release in-game on July 10. That doesn’t give you much time to dig up the cash. Riot hasn’t revealed if further customization will be available for the cosmetic set. Remember, you can upgrade some Valorant cosmetics with Radianite Points earned through the battle pass or purchased with Valorant Points.

Valorant is a character-based free-to-play tactical shooter from League of Legends developer, Riot Games. You can download the game for PC from its website. And, if you need any assistance getting to grips with the mechanics and learning the agents, you can check out our Valorant guides and features hub.