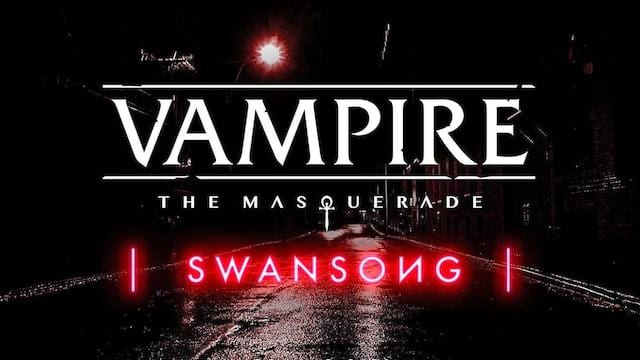 As if Vampire: The Masquerade — Bloodlines 2 weren’t enough to get excited over, the publishing team at Bigben has yet another big game coming. And this one’s sure to please fans of the tabletop RPG. Vampire: The Masquerade — Swansong has been confirmed and is set to release in 2021. Big Bad Wolf is handling development on the title, bringing its role-playing skills to the project.

What does Swansong include?

Swansong is based on the fifth edition of the Vampire: The Masquerade tabletop game. You control three different vampires during the course of Swansong. Each one is loyal to the Camarilla, a secret society consisting of their kind. The three’s individual stories will intertwine in meaningful ways with revelations to uncover. They’ll have to keep watch over their clan, while looking out for power struggles and potential murder.

It all ties in with the Masquerade, a law “designed to conceal the existence of creatures of the night from humans,” according to the publisher.

Big Bad Wolf previously worked on narrative RPG The Council, which has earned praise. So, needless to say, the developer is likely more than pleased to keep working on role-playing adventures in the Vampire world. It’s promised to include a “strong story, supported by solid RPG mechanics that respect the rules of the fifth edition of Vampire: The Masquerade,” according to the press release.

At the moment, there’s no confirmation on the game’s chosen platform. However, considering that most of the Vampire games thrive on PC, it’s likely that Swansong will see a release there.

It may be a long wait for fans of the series, but Swansong could be a worthy addition to the franchise, especially if it has the storytelling level along the lines of Big Bad Wolf’s The Council. We’ll see how it shapes up in the months ahead.