It’s been a quiet few weeks since Blizzard agreed to set up a meeting with Mark Kern and the Nostalrius team to discuss the prospect of vanilla World of Warcraft servers. We wanted to find out what’s been happening since the petition reached its goal and what lies ahead based on the all the feedback that’s been gathered from the WoW community.

PC Invasion: It was great to see the petition reach its goal. Were you surprised at Blizzard’s response prior to your video going live?

Mark Kern: I was surprised. The video release date had been announced, and Blizzard’s statement was released in the early AM hours when people were asleep. Definitely caught me by surprise. We accelerated our video release schedule to meet the new statement on equal footing.

PCI: You were not convinced completely by Blizzard’s response, especially when they mentioned licensing. Can you expand on that?

Mark Kern: Well, it’s just that we have numerous examples of server licensing working for older versions of games. Everquest was licensed and Ultima Online was licensed. Having worked directly on WoW licensing in the past, I was surprised to hear J.Allen Brack’s statement that it was near impossible. In my mind and experience, it’s not only possible, it’s been done before.

PCI: Blizzard has proposed a “pristine server” but that doesn’t go far enough for the vanilla fans. Do you think they will listen and go full vanilla?

Mark Kern: I don’t play current WoW, so I have to rely on the feedback from players about the idea of “pristine servers.” While many have said its a good step forward, just as many have said that without the original content and gameplay, its not what they want. I don’t know if Blizzard will do vanilla or not, but I think they would be leaving a lot of money and gamer goodwill out in the cold if they didn’t do vanilla. 256,000 fans and packed private servers running vanilla emulators shows the demand isn’t just there, its huge.

PCI: For the past couple of weeks you’ve been posting out questions to the community via Twitter asking them what they would like to see from a vanilla service. How has this helped you understand the mindset of the vanilla players?

Mark Kern:  A lot. People are clearly in two camps. Many want to play the game as it was, as a sort of historical monument to relive old content and to enjoy once again what thrilled them the first time they played. Others seem to want WoW to improve along its original design philosophies. These people believe Blizzard changed their design approach around Wrath and definitely by Cataclysm. It seems like they wish legacy WoW would continue to grow in the original way it was intended. Its been fascinating to see the different opinions, feedback and comments. I think there is a lot of clear disappointment with the way current WoW is structured and the survey reflects that. 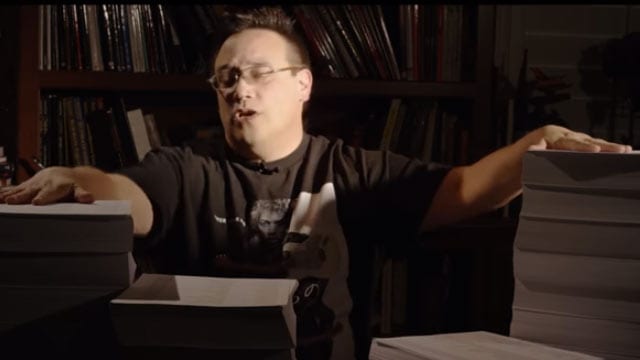 Behold! Mark Kern with a mighty stack of petition papers.

PCI: Details such as not using the new character models have received a strong “no” response. Are you surprised that even a feature like this is not wanted?

Mark Kern: No, it makes sense. People want historical vanilla WoW, and even those who want improvements are hesitant to ask for any changes that would raise the cost or difficulty of making legacy servers a reality. Also, I was reminded of when Everquest changed their player models and how many preferred the older EQ models, so its something I’ve seen before.

PCI: How much of World of Warcraft do you think should be ported over to vanilla? Up to TBC seems to be the stopping point for a lot of players and do you think Blizzard would be willing to even go that far or beyond to WoTLK?

Mark Kern: We should simply start at the beginning with vanilla. Launching anything else would logically be based on how well the vanilla version went and if the demand is sustainable. I have a hunch it might be very sustainable and open up a new line of products for Blizzard.

PCI: What do you think would be the best way to handle this expansion progression?

Mark Kern: I’m a fan of a manual opt-in process. If we just patch vanilla servers up to TBC and Wrath and beyond, we’ll end up right where we started…asking for vanilla servers again. A manual process is where the vanilla server would not be upgraded at all, but stand as a historical server on its own so people can always go back to it. Meanwhile, characters could be copied to expansions as they are ported and released, giving players the best of all worlds.

PCI: The majority want as little as possible changed. Do you think that could turn Blizzard off the idea of pursuing this?

Mark Kern:  No I think it would make it easier for Blizzard to say yes. Modifying a game is always more time and money. That said, if the relaunch is a success, I’m sure there will be improvements. But I think these should be done very minimally to avoid a slippery slope of changes that dilute the core of vanilla servers.

PCI: Nostalrius decided not to release the source code once the meeting had been confirmed which caused a mixed reaction in the vanilla community. Why do you think this was an important decision?

Mark Kern: Yes. While the source code is open source in part and engineered by the Nostalrius team in others, it’s still not legal to host a private server due to IP restrictions and lack of official licensing. Releasing the code would have only undermined the legitimacy of Nostalrius claim and clearly upset Blizzard.

PCI: Things move slowly in the world of Blizzard. Have you received a message from Mike and the Blizzard team?

Mark Kern: Yes, in fact I just did. Date will be posted on my twitter feed @grummz and on my blog crixa.io very, very soon.

Update 16 May: A date for the meeting has now been set.