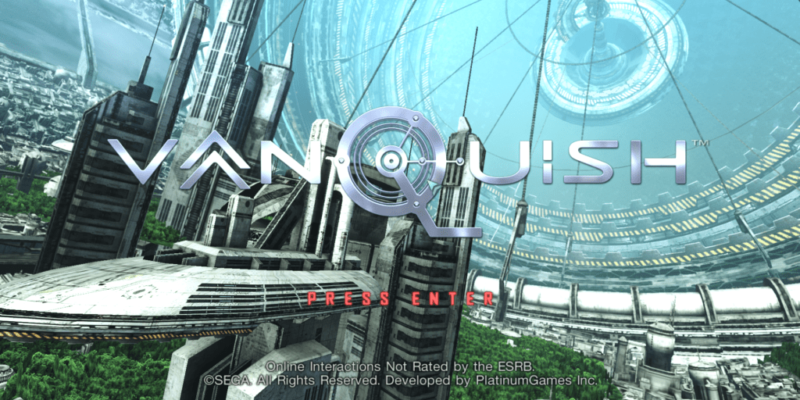 After years of PC users knocking on Kindly Uncle SEGA’s window and asking for a Vanquish release, it’s finally here. A few weeks after delivering what Tim found to be a pretty solid port of Bayonetta, we’ve got another of Platinum’s back catalogue to enjoy.

Is it up to the same standard? Read on to find … actually, you know what, the answer is basically “yes”.

For the purposes of this tech review, I’ve played a couple of hours (Act 1, basically) of Vanquish on the following PC: i5-6600 / 16GB RAM / 4GB 380X (17.5.2 Crimson drivers) / Windows 10. Unsurprisingly for a (nearly) seven year old game, that’s above the recommended specs by a comfortable margin.

Here’s what the graphics options look like. Two images, because the menu scrolls. You can click any of these to make them larger. 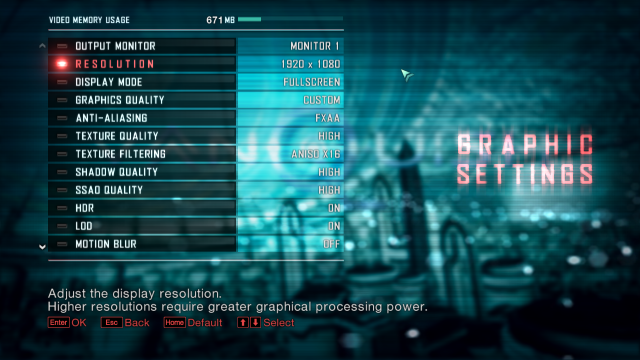 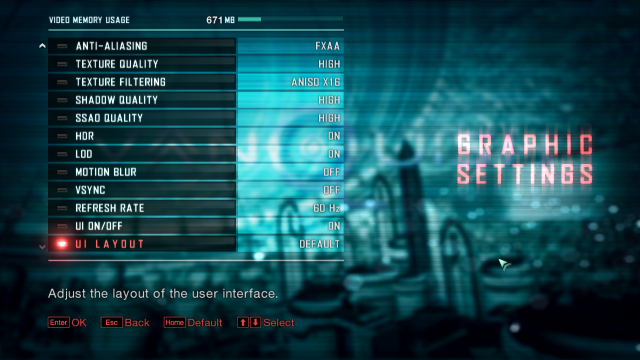 Vanquish supports resolutions up to 4K, but it only has official support for those resolutions in the 16:9 aspect ratio. If you use one outside that, there will be borders. It is possible to remove this restriction with the launch command -unlockaspectratio (right-click game in Steam library, Properties, bring up ‘Set Launch Options’ and pop it in there), but at the possible cost of a distorted UI in places.

I’m not knowledgeable enough about the inner workings of Vanquish’s code to know whether this is the only possible outcome for the PC version, but it’s what we’ve got. It’s one of two (we’ll get to the next shortly) restrictions that seem to be down to the game’s original creation being geared towards the consoles of 2010.

Fullscreen, windowed, or borderless windowed modes are all included. Most of the graphics options listed above are self-explanatory. They predominantly offer Low / Normal / High settings, or an On/Off toggle. Anti-aliasing options are bit mysterious, though. Between Off and FXAA, they list ‘Edge 2x/4x/8x’ and I have no idea what that means. But given its place in the settings it appears to be a lower powered option than FXAA.

A couple of neat bonus settings to note. You can toggle the UI off entirely, and also choose from one of three UI layout settings (which determine where your radar, gun collection, etc sit on the screen). 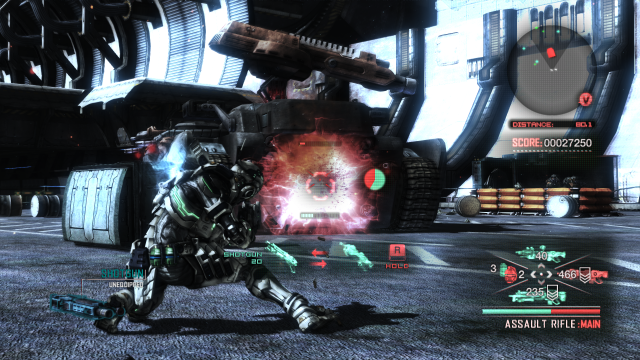 This is the default, with radar in top right and gun selection bottom right.

Performance, as you’d hope for a relatively old game, is pretty consistent. Vanquish has an uncapped frame-rate, and with v-sync off (to see how high it would go) running the highest in-game settings at 1080p I was getting a comfortable 70-and-above frame-rate at most times. That changed to all the time as soon as I lowered Shadows from High to Medium. I’m not sure what’s going on with High Shadows, but looking at the exact same spot on High/Medium was the difference between 70fps and about 50. It seems by far the most demanding setting.

Update 26 May: There is a hidden difficulty spike associated with running at higher framerates, however. As discovered by NeoGaf’s ‘Wesker’, it turns out Vanquish on PC gets a fair bit harder if you play at 60fps and above. Until a patch appears, you’ll take more damage than intended. Have to admit, this entirely passed me by because I’ve never played the original. Far as I was concerned, it was just a hard game. Hopefully this aspect gets a fix. Mouse aiming is a major benefit, but I don’t really think it quite balances out.

Update 29 May:  A patch for the above issue is available as an opt-in beta. It’ll probably be fixed by the time most read this.

The only other time it dipped below 60 was during the periods where chain smoking protagonist Sam has his visor down and all the in-helmet stuff is going on. Luckily, those scenes (so far) only happen during walking between sections of actual action. 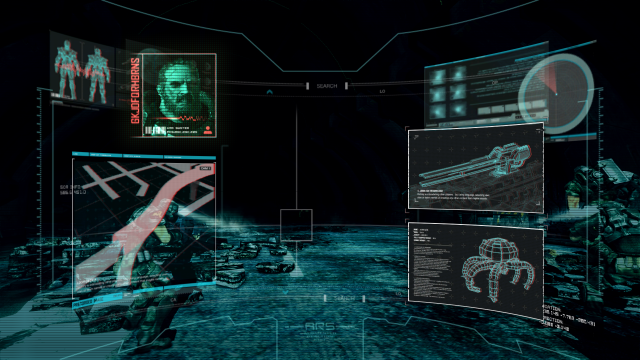 At the absolute lowest settings I was able to entertain dreams of becoming one of those people with a 144hz monitor. Fluctuations seemed wider for some reason, but framerates were always in the 80-125 range. Here’s a comparison between lowest and highest settings (the default ‘Low’ and ‘High’ in Vanquish don’t actually ramp everything all the way down or up so these are both custom configurations). 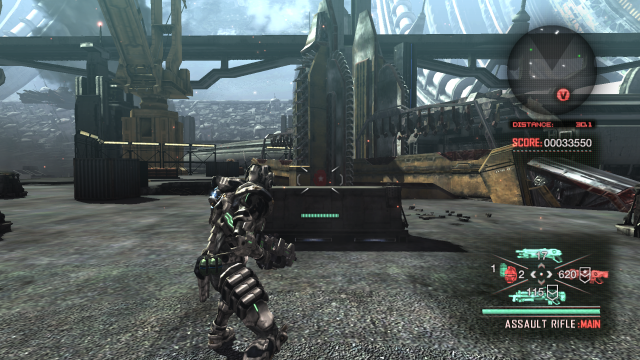 Low, low, all textures must go. 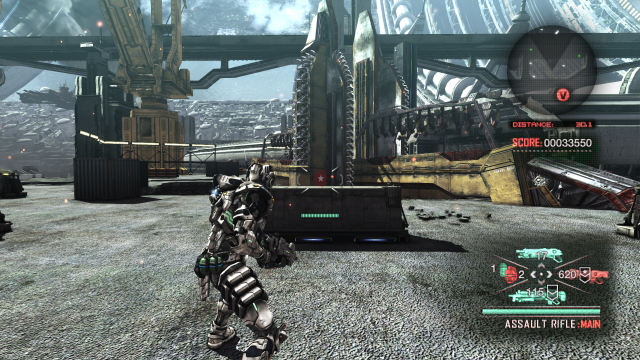 Those images are also taken with the FOV set to 100. Vanquish doesn’t give you an in-game slider for the FOV, but, like with the aspect ratio stuff, you can set it via launcher commands. Using the same instructions as above, -fov 100 (for example) will set it to 100. It’s 80 by default and will go up to 120 before things start getting wild.

Again, it’s not absolutely officially supported. At 120 there was a definite ‘fish eye’ effect creeping in, but playing at 100 seemed stable enough from what I tried. Just be aware that there may be some unintended consequences from raising the FOV because Vanquish was designed around a default of 80 (which isn’t great, but could be worse). Here’s a comparison between the same(ish) scene at 80 and 120. 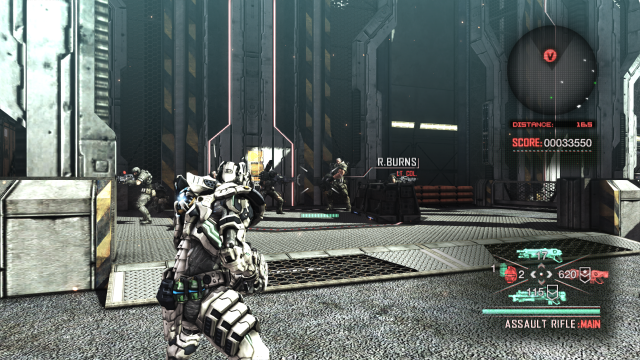 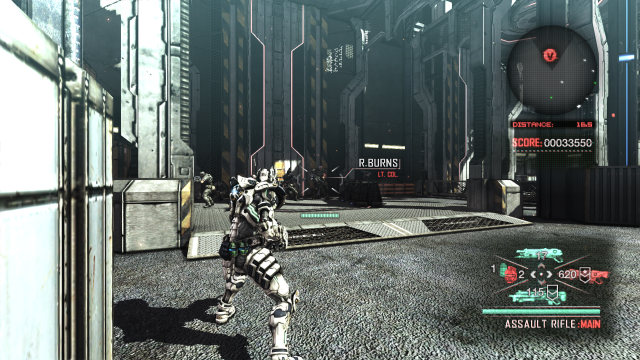 FOV at 120. Looks fine static, but in motion feels a bit fish-eyed.

Always of interest in a first time PC conversion are the keyboard and mouse controls. There are three mouse sensitivity sliders: one for just walking around, one for when aiming, and one for super zoomed in aiming. At the default 50 apiece, the regular camera sensitivity felt smooth and responsive. I couldn’t detect any obvious mouse acceleration. When aiming at 50 sensitivity though, it does feel a little too slow and sluggish. Upping that one to around 70, however, puts it closer to the regular camera motion. 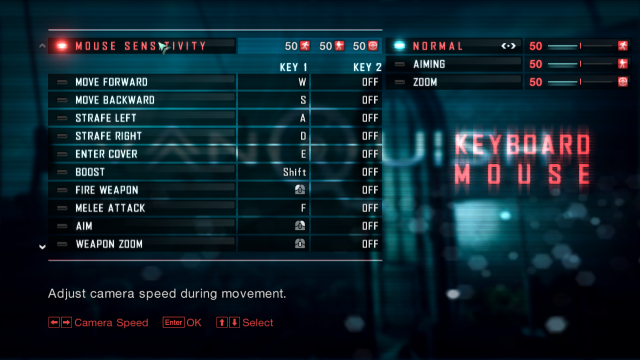 In short, I don’t think Vanquish is just taking raw input from the mouse at all times, but it’s also not applying much itself besides ‘default camera movement is slower when aiming’. Aiming in general is, of course, much more straightforward with the mouse than a gamepad.

On the keyboard side of things you can rebind all controls. The only one which doubles-up is, I believe, aiming/activate ARS slow-mo (both right mouse button by default). But you can also assign a second key option to all inputs, so you could have a separate ARS key with that system if you wanted.

Mouse aiming is an obvious boon, but other keyboard movement does take a little bit of getting used to in comparison to the gamepad controls. The rare quick-time events during boss fights, for example, seem borderline incomprehensible. Does that wiggling arrow mean I should move the mouse in a circle, jiggle it back and forth a bit, ignore the arrow entirely and just hammer the button prompt? What are you trying to ask of me, Vanquish? (Spin in a sort of circle like you’re rotating a thumbstick seemed to be the answer, unless I just failed them all without it really mattering.)

I know, I should probably have an actual image of a QTE here. I was busy being confused.

Despite looking quite like one, Vanquish isn’t really a cover shooter. You need to move around a great deal (usually with an almighty knee slide), regulate your boost meter, and react to circumstances in ways more akin to a late 90s first-person shooter. In that sense I think PC players will be pretty happy with the implementation of keyboard and mouse controls. I prefer them. But the fact that the game was originally designed around a gamepad does persist in some places.

On that particular front, SEGA say that there’s no native support for older DirectInput controllers. A 360 one works fine (I’ve tested that), and the documentation included with review code says Steam controllers are supported too; beyond that I can’t really say. There are a couple of different default control layouts to choose from in-game. 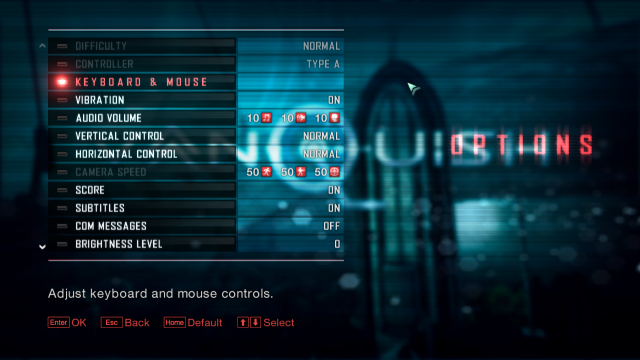 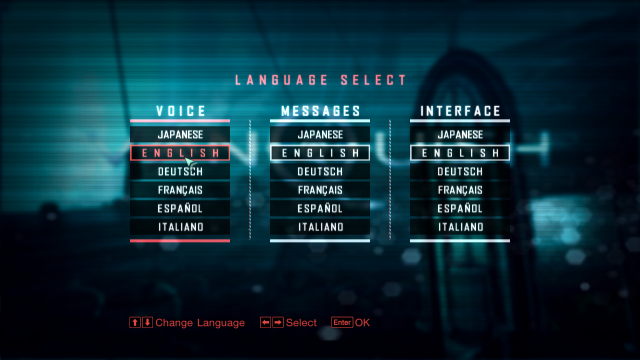 Above are the general settings and (just cut off in the first image) the expanded language settings screen. The latter is pretty extensive, letting you mix and match a variety of languages for voice, text and UI.

Something else worth mentioning is that, as you’d expect, the pre-rendered cutscenes in Vanquish are still at their original resolutions and framerate (720p/30fps, I’m fairly sure). With vsync off these cutscene sections had a bit of screen-tearing, and there were occasional points where it seemed to be trying to run a little faster than it was designed to, but for the most part none of this is too jarring. As with Bayonetta, every single loading screen flashes by much faster than you can read it. 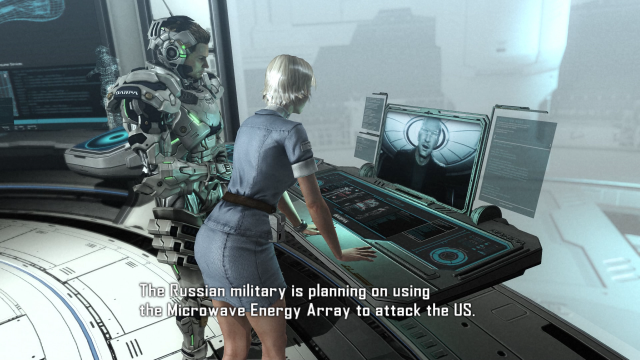 Factors like the older rendered cutscenes are understandable products of Vanquish’s age. The same presumably accounts for the aspect ratio and FOV support being command line options rather than baked into the game’s menus. In the circumstances that seems like a reasonable compromise; offering options that are not strictly supported, but will be desired by many players. It’s been a long time coming, but the uncapped frame-rate, scalable graphics options, 4K support, and satisfactory mouse and keyboard controls finally give Vanquish a definitive home on PC.

PC Invasion interviewed SEGA Europe’s John Clark about the company’s recent spate of ports. You can read that, here.

Dawn of War 3 balance patch delayed to 31 May

By Otto Kratky13 hours ago
Hardware