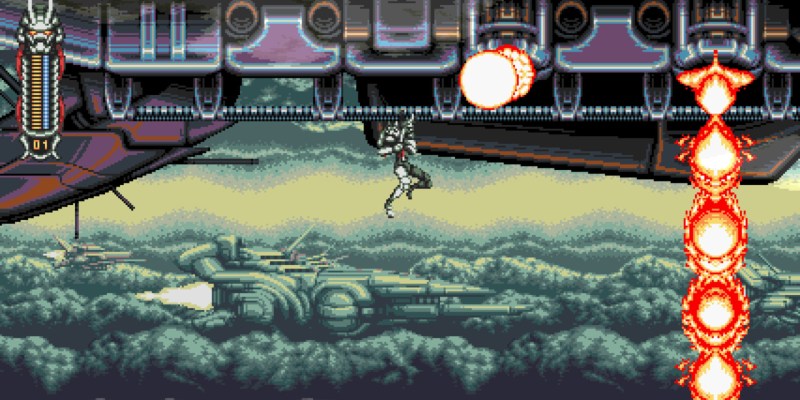 Who doesn’t love throwback 2D sidescrollers where you play as ninjas? Charlatans, that’s who! Vengeful Guardian: Moonrider is being developed by the folks behind Blazing Chrome, only it tackles Shinobi instead of Contra. A demo is coming to Steam soon, and I got to check it out early to share what you can expect when you’re finally able to check it out. While demos are rightfully quite short, this is one of the shorter ones. It can easily be finished in less than 10 minutes. But that’s not surprising considering the games that inspired it, and, hey, now I really want to play more.

Honestly, the Vengeful Guardian: Moonrider demo will be even shorter if you don’t do the tutorial. As you’d expect, this teaches you how to play the game, but since it’s a throwback sidescroller, I’d wager you could figure it out on your own without much trouble. The game begins in a laboratory where the main character breaks out of their containment pod and proceeds to slaughter everything in sight. Controls are simple but nuanced. You walk, run (either by double-tapping a direction or holding a button), swing your sword, do an air kick, use a special attack, and wall jump.

My favorite aspect of Vengeful Guardian: Moonrider is easily the air kick. It can attack either straight down or at a diagonal, and the force of it hitting an enemy will bounce you back enough that you can use it as many times as you want without touching the ground, given that your target is still alive for you to kick back off of. The first of the demo’s two levels has you making your escape through the laboratory, dodging machines that launch fire and enemies with rifles. Your sword can actually cut enemy shots, too.

Air kick your way to victory

The first level finishes with a boss fight against the head and hands of a giant robot foe. It’s only vulnerable while it’s attacking, but you can attack either one of its hands or its head. When the head attacks, you can air kick off of it for the duration. Do enough damage to a single hand and it’ll break off prematurely. Afterward, you’re off to the second level of the Vengeful Guardian: Moonrider demo — a trek across a bunch of aircraft. Most are small, but there are also larger ships to jump on. You’ll have to contend with flying drones and an enemy with a boomerang shuriken.

At one point, you’ll get shot at by a huge laser. If you happen to fall, the only consequence is a small amount of lost life. Before long, you’ll come to the end when your ninja meets up with another ninja, which ushers in the stage clear screen and a trailer showing off more of the game. I was really impressed by the Vengeful Guardian: Moonrider demo. The 16-bit graphics are chunky and classic in the best way, and the controls have that old-school rigidity that feels just right. It does have a lives system, which will no doubt turn off some prospective players, but this is clearly another game to anticipate.