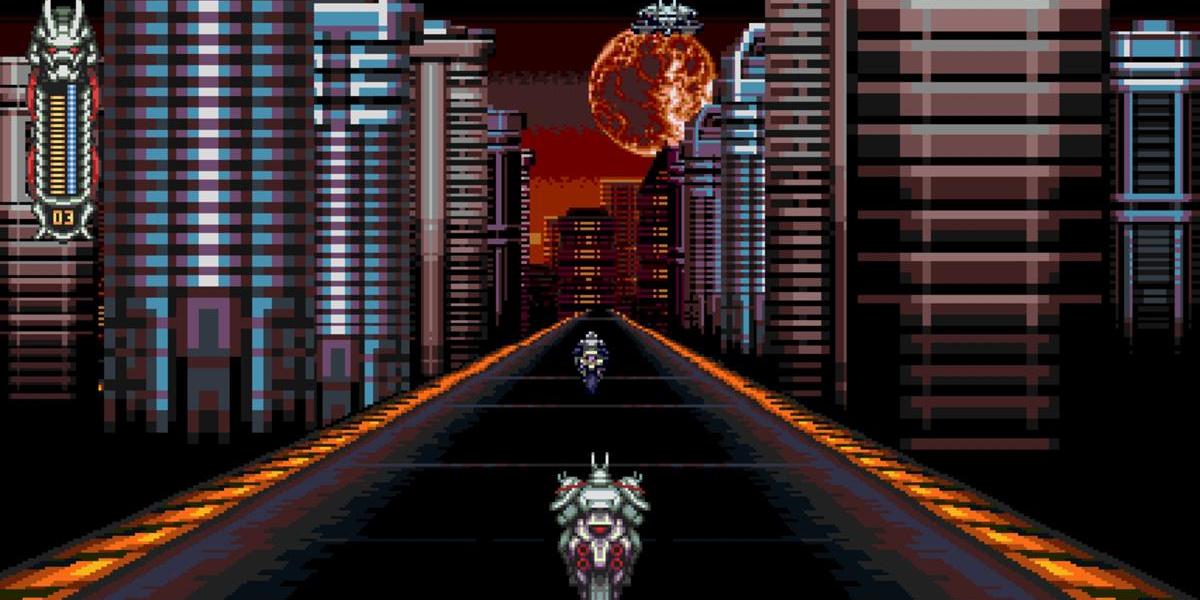 Back when I played the Vengeful Guardian: Moonrider demo, it was pretty clear to me that the game was aiming to be some sort of throwback to Sega’s classic Shinobi. After playing the whole game, I realized that this impression was mostly wrong. The game is more like Mega Man if it played like Shinobi with improved mobility and a completely different level design focus. That is to say, the game really does its own thing. It looks great, the controls are mostly solid, and the level design is impressive and memorable. But the rigidity of some of the movement and surprising lack of challenge coupled with a short running time don’t do it many favors.

Vengeful Guardian: Moonrider opens with the titular character breaking out of a lab where it was designed. You’re some kind of ninja android on a quest to stop some other ninja androids from following the whims of a council of baddies. After completing the opening stage, you have a choice of six others. Completing those will see you taking on a couple more levels. All in all, the game takes about two hours to get through if you just play each level once.

Although I expected the game to be fairly challenging, I did indeed only really need to do each level once. Each one ends with a boss battle that awards you a new ability, just like Mega Man. But bosses don’t seem to be weak to each other’s abilities, so you don’t have to utilize trial and error to determine what order to fight them in. Abilities use up energy and the default one is strong enough that I was able to brute force past almost all of Vengeful Guardian: Moonrider‘s bosses in one or two tries. 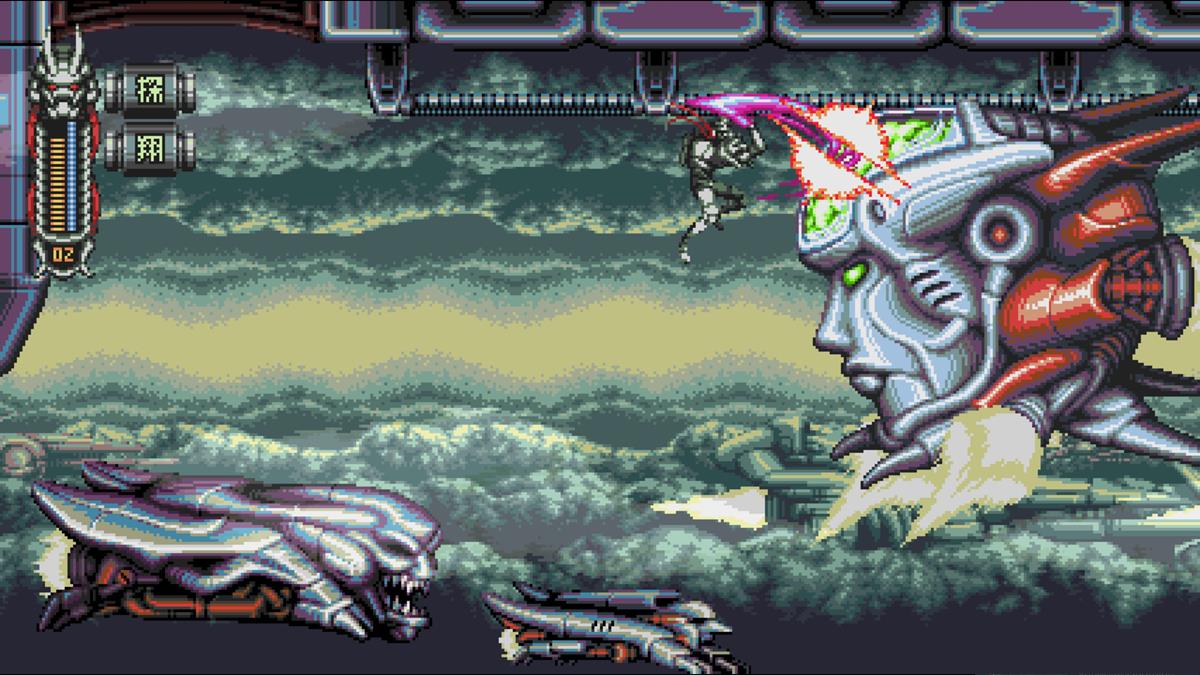 I usually like to attempt to brute force sections in games to get a feel for how careful I need to be. Vengeful Guardian didn’t punish me for this. Aside from one miniboss and the final fight, I was able to beat each and every miniboss or boss just by face-tanking them. If you’re expecting Mega Man-style boss challenges, you will not find that here. Strangely, the aforementioned mini-boss fight was harder than almost every boss battle, including the boss in its own level. I’m absolutely not any sort of “games need to be challenging to be fun” kind of player, but the ease with which I made it through Vengeful Guardian: Moonrider underwhelmed me.

Not that the game’s a cakewalk, mind you, as it can be somewhat challenging in spots. The game uses a lives system, so you have to restart each stage from the beginning if you run out. I think I got one game over. I would have gotten another one if I hadn’t farmed for lives before jumping into the last level, which was a good choice as the final boss took me about seven tries. They represent a pretty massive difficulty spike, which I think was pretty odd, but it’s certainly not the first or last time we’ll see a final boss that’s considerably tougher than the rest of the game.

The main character is enjoyable to control. You can double-tap left or right or hold a button to run, which grants them a stronger slash. Their default slash has a decent amount of range by default, plus they can wall-jump and do a drop kick straight down or at a diagonal, which will allow them to bounce off the impacted foe. But the controls have some of that intentional 16-bit rigidity to the movement that made me recall Castlevania. I would have preferred more modernized movement. Plus the default attack is also like a Belmont’s whip strike, which can make the fighting a bit more limited. You can’t attack above you, but you can at least crouch and slash. 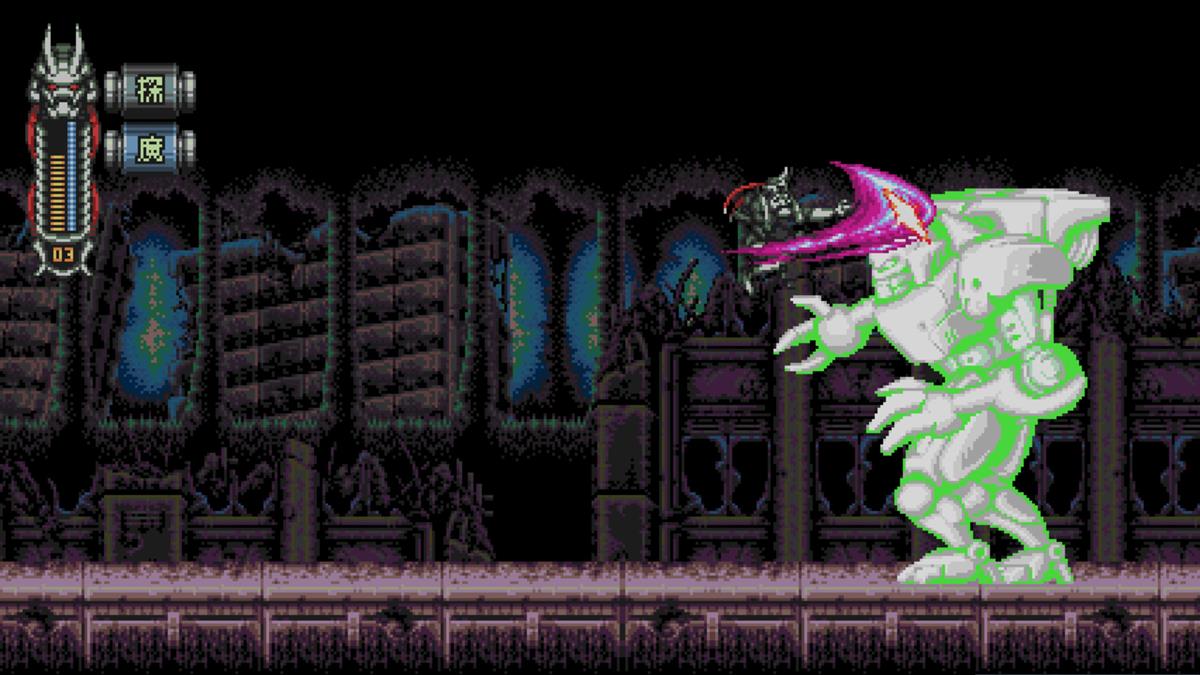 I didn’t actually use most of the abilities granted by defeating bosses much. The default ability served me well, but there’s also a portal attack that summons a tentacle that does repeated strike damage that I kept equipped as soon as I acquired it. It’s kind of broken and can quickly tear pretty much anything apart as long as you aim and time it correctly. Moonrider can also equip two chips that alter its abilities. You’ll find these scattered in the game’s first seven levels and they vary in usefulness. There’s one that puts a question mark onscreen whenever another chip is nearby. I preferred to use the ones that granted a double jump and increased the range of the default sword slash, though, as those were very useful to me.

The level design is quite impressive in general. Levels have very imaginative layouts with a strong sense of place. Things are rarely aggravating and different levels have varying verticality and well-placed use of backgrounds and assets. A couple of levels have killer pseudo-3D bike sections that look fantastic. Aside from these, Vengeful Guardian: Moonrider would fit right in with a fair amount of SNES games (complete with chunky sprites), albeit with a high amount of detail. There’s not much to do aside from replaying levels for better rankings once you beat the game, but that’s where most of the challenge and replay value will lie.

I had a good time with Vengeful Guardian: Moonrider, but I feel like it doesn’t make the most of itself. If it had infinite lives and significantly dialed up the difficulty of individual level sections and boss encounters, I think this would have been a more impressive game. As it is, it’s fun and attractive, but feels quite slight, which is unfortunate considering the qualities on display. 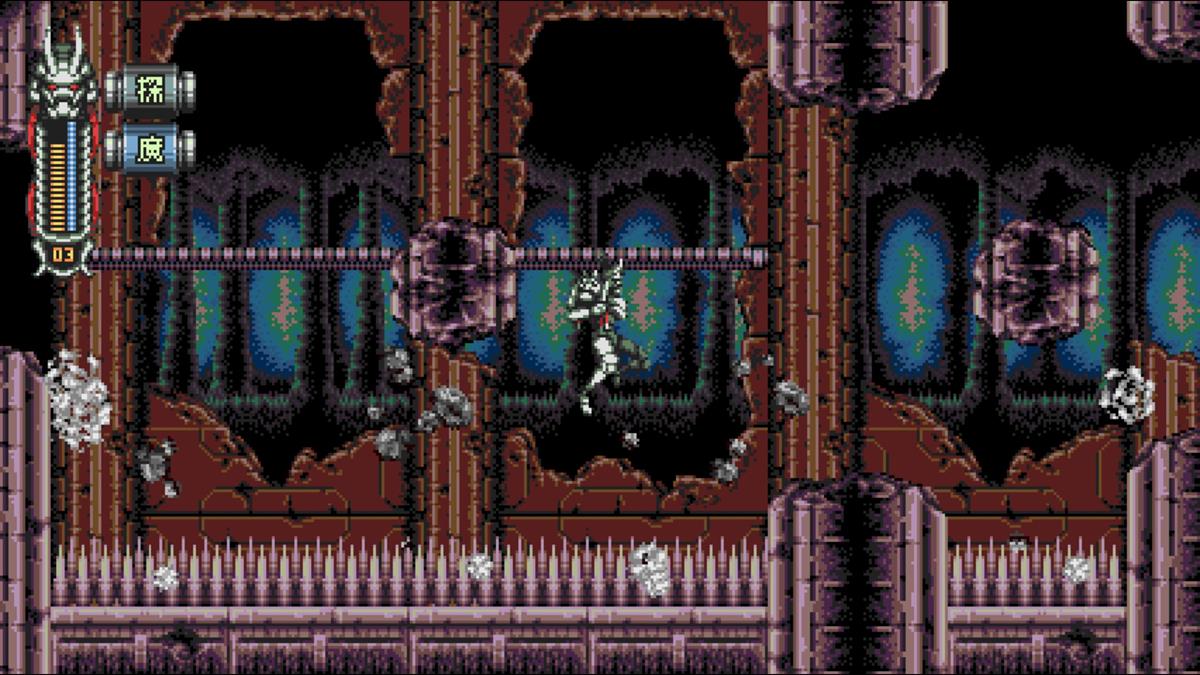 Vengeful Guardian: Moonrider has a lot of heart and very strong level design, but it's weakened by a low level of challenge.