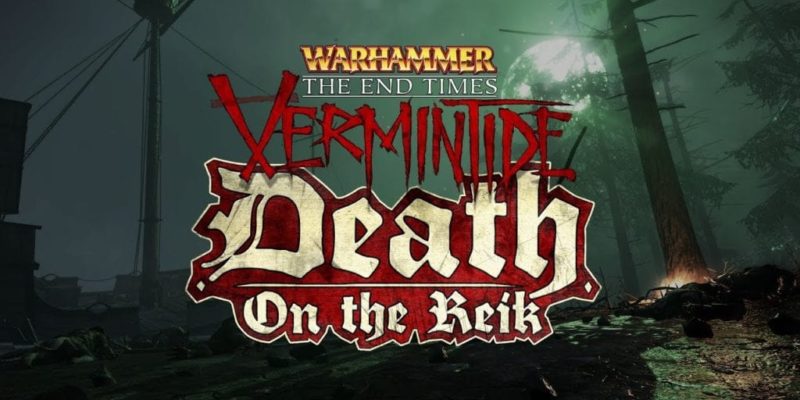 The sequel to Vermintide is due next year, but Fatshark still have a piece of DLC in them for the first game. ‘Death on the Reik’ is available today, and for those who pre-ordered Vermintide 2, it’s automatically unlocked in-game.

I know this, because it’s written in big capital letters no fewer than three times throughout the post on Vermintide’s Steam community hub. Hopefully everybody should be able to spot that.

Death on the Reik otherwise costs $7.00 USD and adds a pair of new maps to the game (Reikwald Forest and River Reik). Your trip to the Reik is in an effort to chase down one of the Innkeeper’s men, who has stolen some dangerous books. It’s probably best if the Skaven don’t get hold of those, so you’ll need to get to the Dawnrunner barge, capture the thief, and destroy those tomes.

In addition, Vermintide has been patched to version 1.10. After the trailer, you’ll find the notes for both DLC and patch.

Cursed Rune: Corrected a location where items spawned partially embedded in map decoration
Cursed Rune: Fixed location where the player character could hang from a ledge out of reach from team mates
Cursed Rune: Fixed a small hole in the geometry seen after the finale
Cursed Rune: Fixed location early in the level where rats climb out of solid ground.
The Enemy Below: Fixed a small hole in the geometry, above the first grimoire location
Engines of War: Removed collision from a section of the cave prior to the Skaven encampment that should not have had collision
Engines of War: Fixed spot by the second grimoire where Skaven appeared through walls
Garden of Morr: Fixed floating tree at the entrance of the cemetary
Garden of Morr: Fixed uneven geometry on a tomb steps when looking for the source of the poison
Garden of Morr: Fixed a small hole in the geometry right beside the huge intentional hole as you begin the escape event
Supply and Demand: Fixed small hole in the geometry
Trial of the Foolhardy: Players should no longer be insta-stomped by a special when traversing the portals.
White Rat: Improved network sync of the bell strikes. Hosts and clients should see the visuals more or less at the same time now.
Wizard’s Tower: Removed a jump that allowed you to meddle with the bridge illusion
Fixed a couple of cases where enemies (mainly the Gutter Runner) would die when staggered whilst mid-air
Fixed a case of Gutter Runners killing themselves by launching in to walls
Fixed a case where enemies (Rat Ogre in particular) could phase through the geometry when staggered
Fixed so that blood no longer fades instantly when spectating
Fixed case where enemies falling out of the world would not give progress to contracts.
Fixed crashes that could occur if client disconnected while being pulled up or while pulling up from ledge
Completely overhauled bot jump code to reduce the number of failed jumps resulting in bots needing to be pulled up from ledge
Fixed an issue that could cause bots from getting stuck in a loop of instantly falling off the ledge after getting helped up
Fixed issue causing environmental effects on snow levels to not work on bot characters for clients
Fixed animation bug making the made Kerillian play third person crouch animations after wielding a glaive while aiming a bow
Fixed so that when hot-joining a match, you’ll no longer be prompted to interact with nearby ‘single use’ environment objectives that have already been used (think levers, switches, etc)
Fixed some cases where enemy path-finding would fail
Fixed it so that the it no longer shows “left button **” for unbound keys in the keybinding options menu
Fixed Gutter Runner destroying doors from too far away.
Made some improvements to Gutter Runner pathing when there are no available targets

Haste: Changed, now causes reloads not to consume ammo for the duration instead of shots not consuming ammo.
Quick Foot: Reduced movement speed bonus from 4/8/12% to 4/6/8%
Grenadier: Reduced proc chance from 20/30/40% to 20/25/30%
Hawkeye: Reduced multiplier bonus from +2 to +1
Explosive Ordinance: Reduced radius decrease from 40/50/60% to 20/30/40%
Berserking: Attacks are now uninterruptible for buff duration
Killing Blow: Now requires the attack to deal damage to the target to trigger

Shortbow: Increased max penetrations of charged shot from 1 to 2

Handgun: Reduced reload speed from 2.5 to 2 seconds
Handgun: Increased damage versus resistant to 26/31/36

Homefront is free on Steam for the next 24 hours