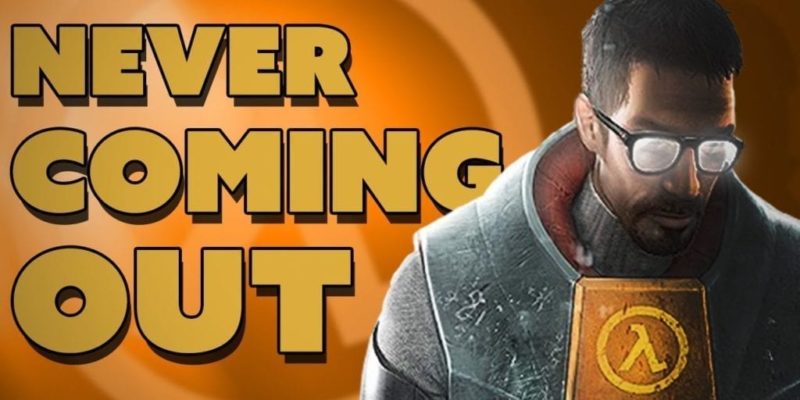 Another week, another Half-Life 3 rumor.  It’s hardly the first, and unless Valve announces the game in the next week, it won’t be the last. We’ve heard before from Valve sources confirming that the game is close to release, and others clearly stating that Valve has absolutely no intention of releasing Half-Life 3 any time soon. Among some of the reasons offered for Valve’s general indifference towards continuing their flagship franchise is that they simply make enough money already, and that the potential backlash from fans to anything less than a perfect game could be more detrimental to the company than the (likely) huge revenues that it would generate.

If that’s true, it’s hard to say whether Valve might be right in fearing the backlash from increasingly vocal gamers if their new game isn’t everything they’ve imagined and more, but it’s at least an understandable fear. And the passage of more than a decade since Half-Life 2 isn’t likely to diminish the high expectations for a new Half-Life game. Instead, time has likely only made it even more difficult to please gamers, which brings us to the problem of nostalgia.

Have you ever watched a favourite movie decades later and found it vastly inferior to your memory? Or played a game that was so much less fun or meaningful on a later play-through? You probably have. As time moves on, our natural tendency is to overlook the negative aspects of our memories and focus on the positives. There’s a great deal of scientific literature on this effect, which shows that nostalgia is both real and that it serves the useful functions of improving our moods, enhancing our views of ourselves, and of moving past negative or injurious experiences.

The problem with nostalgia is that it can also romanticise past experiences, making them core to our perception of self. And this, in turn, makes us defensive of those experiences as though any negativity directed towards them is an attack on who we are. It hurts when we discover what we once loved is not as amazing as we thought, and we become prickly when others try to tell us this.

For gamers, the experience of playing video games is no different. As time passes, our memories of a given game move away from the specific moments of playing the game, and replace them with general vague feelings or notions. The games we most liked graduate to being touchstones of our gaming tastes, becoming paragons of excellence even as they recede into distant memory. With Half-Life 2, we no longer remember the individual moments of driving across antlion-infested wastes in our dune buggy, or exploring Nova Prospekt. We remember that we did, certainly, but mostly we remember simply that we enjoyed it. We remember thinking that the graphics looked so real. We remember thinking that the game was revolutionary.  And if we look at metacritic scores, we feel that our memories were justified.

But don’t worry, I’m not about to try to tell you Half-Life 2 was actually a bad game. It wasn’t. It was a very good game deserving of all those accolades at the time. But it was still a game full of flaws and  awkward moments and bits that might have been a lot better. The truth is, had Half-Life 3 come out shortly after Half-Life 2, there would be a lot more room for forgiveness of its flaws. We’d remember, yeah, the shooting wasn’t always all that great, and maybe the physics puzzles weren’t that interesting, and maybe Dog wasn’t actually the coolest thing in the world.

So, had it been released in, say, 2009,  it might just be OK if Half-Life 3 wasn’t absolutely perfect in every respect. But it’s too late for that. Most of the people that loved Half-Life 2 aren’t going to go back and play it again to bring their memories in line with reality. Instead, to be well-received, it’ll have to not only innovate on every aspect of its core game play, but also surpass every recent first-person shooter, puzzle game, and horror game in all of their core elements simultaneously. And as anyone who has heard of Mass Effect 3 knows, it’ll also have to resolve its plot perfectly.

Making new games in old, revered series is a hard thing to do, and it’s not always a good idea. Look at Duke Nukem Forever, a game that was a sequel to Duke Nukem 3D, which had come out fifteen years prior to critical success. The fifteen year interlude did nothing to help it. The game was a complete flop critically, due largely to claims of basic shooting mechanics, juvenile humor, and sexism. What the intervening fifteen years did do is make everyone forget that Duke Nukem 3D was a juvenile and sexist game with basic shooting mechanics, too. Why anyone who had played Duke Nukem 3D would look forward to a sequel is beyond me.

It’s not impossible, of course, to add successfully to an old series, as the reboots of Deus Ex and Tomb Raider have shown. But in neither of those cases was a follow-up expected, or highly anticipated, before development had begun. They were reboots of series that gamers might perfectly well have expected to be dead. The number of gamers calling for new Deus Ex or Tomb Raider titles was nothing next to the eternal chorus of those pushing for Half-Life 3.

But we are about to see some examples of nostalgia versus reality in action, albeit on a slightly smaller scale. At E3, Sony announced both a new Shenmue game and a remake of Final Fantasy VII. Gamers have been clamouring for these for some time. That said, I’ve played Final Fantasy VII recently, and it’s still great. I worry more about the changes than what they keep the same. But there’s still a lot of risk in toying with people’s false memories, and the pressure on Square Enix to make the new Final Fantasy VII great must be high. Almost as high, I expect, as that on J.J. Abrams for the next Star Wars movie.

So here’s hoping that the Half-Life 3 rumours are true, that its released, and that’s it’s the single greatest game made by the hands of mortal men and women since the dawn of life itself. But if it’s not, let’s try to remember that Half-Life and Half-Life 2 weren’t either. And maybe we can be happy, then, with our merely good and merely fun game.

Divinity: Original Sin 2 gets enough bread to develop the undead

By Kevin Foley11 seconds ago
News