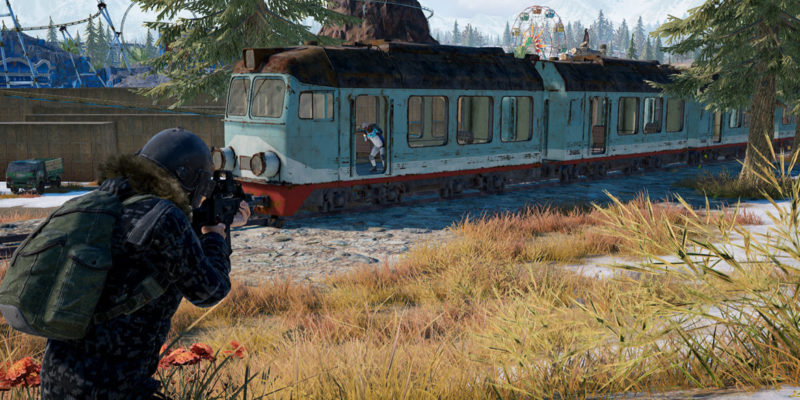 PlayerUnknown’s Battlegrounds (PUBG) recently retired the snowy Vikendi map. The map wasn’t in the best place with players often bemoaning how unpleasant it was to play. Some time out of the spotlight seems to have done Vikendi the world of good, because it’s back with revamped landmarks, newly landscaped terrain, face lifted towns, an update to the popular Dinopark, and trains that travel around the map.

In the PUBG Vikendi map update video, we get a brief glimpse at the updated Dinopark. Firstly, it has been renamed Dinoland. Which is far grander. Secondly, it looks spectacular. You can now picture people wandering the park before it became one of the most popular places to get murdered in PUBG.

The idea of trains that roam the map is also very exciting. They’re not exactly a new concept, Apex Legends’ latest map has a train that travels around the map. But the movement in PUBG is far slower than that of Apex Legends, meaning the trains will have much more of an impact on movement around the map. I’m far more hyped for the PUBG train.

PUBG Corp wants to get feedback from players early on in Vikendi’s redevelopment process. So, it’s giving PUBG Partners and their communities the chance to get their coats on and drop back into Vikendi this weekend.

Everyone who tries out the updated Vikendi will be able to share their thoughts about what works and doesn’t with the PUBG team and help shape the map. Pay careful attention to the amount of loot around the map and the timings of the blue zone. Those were the biggest issues in the old version of the map. And please (pretty please) tell them you don’t want level three helmets lying around.