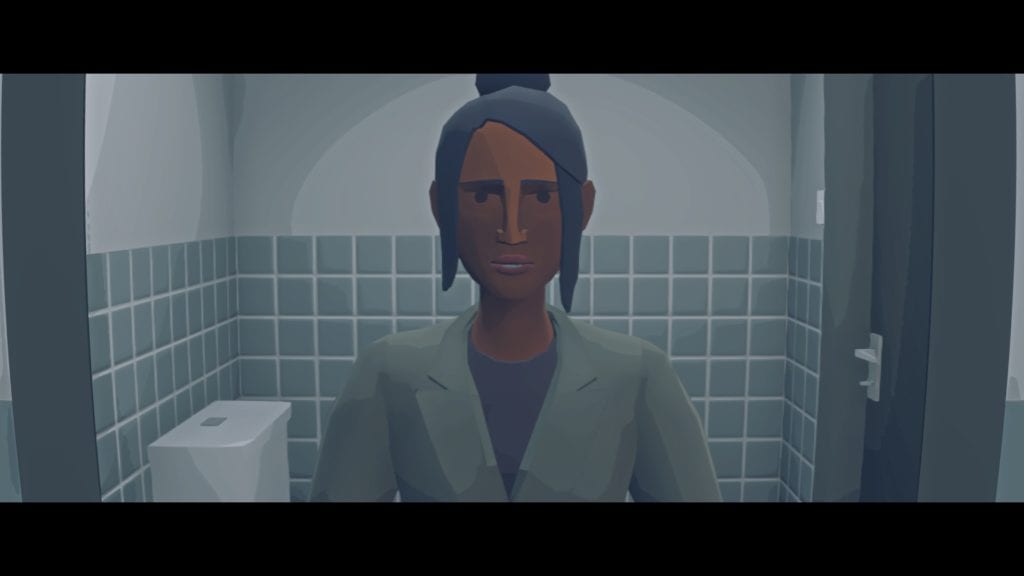 I’m writing this paragraph about an hour after finishing Virginia, and I expect the rest of the review to take me at least a few days. That’s a little surprising for a game that’s around 90 minutes long, but then, it’s a game that confused me quite a lot – in ways both intentional and not. Wank hats on, everybody, and I truly apologise for the pretentious, train-of-thought weirdness I suspect I’m about to write.

Let’s start with what Virginia is not. It’s not what I was expecting, for starters. I’m also not sure I’d call it a “game” in the classical sense; there are no puzzles and no action, and indeed, pretty much no player agency. It’s a linear story. It’s a film in first person, and it’s a weird film at that.

While the search for the missing boy kicks things off, it’s not really the focus of the game.

Based on the Steam description, I was expecting something a little like Life is Strange, or Deadly Premonition: The Adventure Game, or… something. (Okay, maybe not Deadly Premonition, but Virginia wears its Twin Peaks aspirations on its sleeve.) I anticipated an adventure in which two FBI agents explore a town in which a young boy has gone missing, interviewing some truly eccentric suspects, and gradually uncovering the town’s dark and twisted secrets. That is absolutely not what Virginia is.

For starters, there’s no dialogue. The only things you’ll hear throughout the game are the music (which is utterly superb, and perfectly underpins the events on screen) and the sound effects. Everything “plot” is conveyed through the scenes, the animations, and the occasional bit of reading.

There are no choices – or at least, none that I found; while the Steam page claims you’ll make decisions, everything seems entirely linear. I did actually try to not do something at one point, but the game sat there until I finally clicked the button. Maybe there are choices, but I didn’t find them.

One of the rare occasions when you get to walk around of your own free will!

The “game” aspect is you looking around. A lot of the time I mean that literally: there are plenty of segments where you’re seated, and all you can do is turn the camera. Some segments have you walk around and look at things, or click on stuff to use it. There are little collectibles you can find, too, but that doesn’t really constitute a game, even if they do have a (very mild) impact on some of the environments.

It’s also linear in a very, very particular sense. Like I said, you really don’t have much agency at all. Even when you have control, you’re locked in a small area with only a limited amount of things to do, and often the scene will end after a short period of time anyway. Sometimes scene progression is linked to you doing something. Often, it just happens. Very often, it happens for stylistic purposes, and I do rather like these: rather than walking through a corridor and down a flight of stairs and through another corridor, it quick-cuts from one to the other. Filmic, basically.

It’s the sort of game (or “interactive story”, or whatever) that makes me really want to use the word “auteur”, just because of how carefully engineered basically every aspect of the experience is. In technical terms, the entire game is letterboxed, and while the game supports 60FPS it claims that 30FPS is the way it’s meant to be played. There’s some weirdness to the mouse movements and the FOV is generally low, which is almost certainly going to result in nausea for some. I’m absolutely certain this is all deliberate and intentional because of the way it changes the feel of the game.

What does this mean? You’ll find out. Probably.

Then there’s the story itself, which is… surreal. I can’t honestly talk much about it, partly because the whole thing clocks in at under two hours and so I’m limited by sheer spoilers, and partly because it’s so bloody weird I’m still not sure what happened. I have theories, but little else!

Some segments are real. Some segments are dreams. Some segments are hallucinations. Some segments look like they’re real, and turn out to be dreams, and… well, you get the idea. It’s very, very confusing, and I haven’t quite decided if it’s incredibly clever and full of meaning, or if it’s just deliberately obtuse and undeserving of deeper thought. Considering how deliberate and confident every other decision made by the developers is (like all of the technical stuff above) I’m leaning towards the former, although the last ten minutes of the game definitely feel like they’re being wilfully weird and left a bit of a sour taste in my mouth.

It’s also really, really beautiful. Have I mentioned that?

On the one hand, the fact that you’re rudely shunted through so many scenes so quickly, without being given an option to interact or look around all that much, is a bit disappointing. There’s rarely anything to interact with or look at that won’t simply shuffle you onto the next scene.

On the other hand, this style of interactive story-telling borders on sheer genius. The entire game manages to convey most of its points through setting, or body language, or little eye movements (no small feat, considering the stylised art). As an example, you play as rookie FBI agent Anne Tarver. Assuming you hadn’t read the Steam description, you’ll know this because of the fact that it’s written on her badge, and because the game opens with her graduation ceremony.

Actually, “play as” is a terrible term. You inhabit rookie FBI agent Anne Tarver. But I digress.

You know what? You go investigate that. I’ll wait out here.

It wordlessly conveys a lot of things this way. You’re partnered up with veteran agent Maria Halperin, who appears to be on the bureau’s shit list not just because you’re asked to keep an eye on her for Internal Affairs, but because her office is a lengthy trek along that aforementioned corridor, then down a flight of stairs, then through another corridor in the basement. Despite lacking pretty much any real “action”, showing only the scenes in between those points that would normally be focused on, it regularly manages to convey senses of foreboding or oppression or anger or joy. All without words.

Really, Virginia isn’t so much about the mystery of the missing boy, but about Tarver and Halperin. It’s about their growing relationship, combined with wonder about whatever the hell Halperin did to get chucked into that office and watched by IA, and mistrust, and betrayal, and so on – all set around the investigation of the missing boy. It’s worth noting, too, that Tarver isn’t an avatar for the player, but a full-fledged character in her own right. You don’t play as her, because that implies agency, and she has her own feelings and thoughts and decisions which are made clear throughout “play”. That’s partly why I’m not entirely surprised that Virginia doesn’t seem to offer any real choices.

I kind of want to class Virginia as a walking simulator – still not a pejorative, by the way – but that doesn’t feel accurate because they tend to at least give you some freedom to explore your lovingly crafted environment. The closest comparison is to Blendo Games’ fabulous Thirty Flights of Loving (which Virginia notes as an inspiration, right at the start of the credits) but while that was a fifteen minute heist with elements of surrealist comedy, this is a 90-minute “film” that plays at being a Twin Peaks detective story. While the lack of dialogue certainly helps with the marvellously surreal atmosphere, it doesn’t help create a compelling mystery… but then, the mystery itself isn’t really Virginia‘s focal point.

Tarver and Halperin mean more to the story than the missing boy, really.

Okay. It’s now a few hours before the game launches, and I’m still trying to figure out what the hell I think of Virginia and how the hell I assign a number score to a game that’s going to be so ludicrously divisive – and for that matter is barely described by the word “game.”

I’ll say this: last night, while trying to sleep and in an antihistamine-induced stupor, I found myself thinking about Virginia and piecing together more of its story. I linked up a few more bits that I hadn’t figured out (especially to do with that ending) and got a sense of satisfaction that things finally made a bit more sense, as well as a sense of melancholy at what some of it seemed to indicate, plus one final punch to the stomach at a particularly heartfelt implication. I don’t honestly want to share these observations or find out what other people think it all meant; for whatever reason, I’m quite satisfied by my own interpretation.

I’m still not convinced it’s not being a bit bloody-minded about how weird it is, but nearly a week after playing it, I’m still being impacted by it. If anything, I appreciate it rather a lot more now than I did when I first finished it. Last week I’d have dropped the score by at least one point, if not more.

I was going to include a picture of one of the weirder scenes, but that would probably constitute some sort of spoiler (or giving you the wrong idea about things), so instead you can have angry smoking teenagers.

I’ll also say that I’m probably a little biased towards it, if only because I’m fascinated by the use of videogames as a medium for telling stories, and this is both one of the oddest and clearest attempts at doing exactly that. Virginia makes very little pretense of being a game.

A lot of you are going to hate this “game”, and that’s fine. A few of you are going to adore the everliving shit out of it, and that’s also fine. Some of you will probably swing from one camp to the other. It is absolutely not for everyone, or even for most people, which is what makes writing this a really daunting task. Even as a film – and I feel like this actually wouldn’t work nearly so well as a film – Virginia would be aimed at a really niche audience.

At the price (£7.99, I believe) it’s a bit more of a risk than I’d like, but Virginia has a demo. Try the demo. Dick around with the first 15 minutes of the game, and understand that the entire game is like that, that it’s not going to give away any easy answers, that it’s incredibly short, and that most of the “action” takes place between the bits you actually see. If that doesn’t put you off, then maybe a trip to Virginia is worth your time. You might be one of the few who finds something really, really special within.