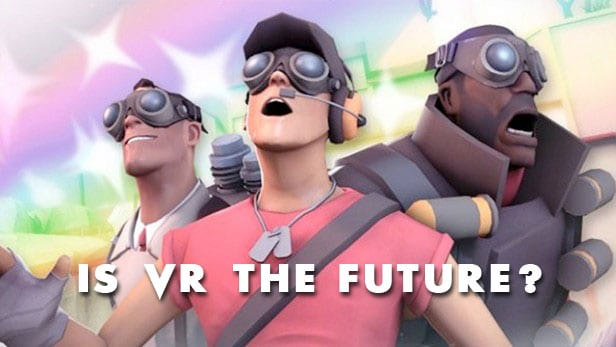 In my previous two articles (part 1 and part 2) I discussed the setup of the Vive and also took a look at many of VR games currently available. I have used consumer VR over the past two decades and this article sums up my experience with the latest VR hardware and what it means for gaming right now.

When the first big consumer virtual reality push happened in the 90s all PC gamers were excited. It was a new beginning for gaming. Sure, the hardware was expensive, but the price would drop eventually. The gaming press were mad for it at the time, too. It was the closest we could get to being inside an alternative reality.

Back then, PC gaming as we know it was still in its infancy, and there were few titles to choose from. In fact, there were hardly any designed specifically for VR. Games such as DOOM 2, Quake, Descent and EF2000 were the best ones at the time, but none were created with VR in mind.

The 90s virtual reality hype didn’t last long. Once the hardware actually hit the market PC gamers were unwilling to spend large sums of cash on what was essentially a fancy peripheral with little support from software. In 2016 the price of this generation of VR kit has been higher than most consumers expected and that’s exactly what happened in the 90’s. The scan from an issue of PC Zone below highlights that little has changed.

Here we are today with so much hype surrounding VR it’s quite astounding. The gaming and tech press are responsible for that, and the hardware manufacturers like Oculus and HTC have been lapping it up. The frenzy surrounding pre-orders was quite staggering with stacks of early adopters wanted a slice of the action.

Pictures from tech shows of first-time users staring at the ground or looking into the air with gawping mouths have helped sell this generation of VR. The first time you use this latest tech it is great, mainly because it’s a different experience, a sensation any gamer is not used to experiencing. This has been the oxygen that’s helped fuel the VR frenzy. We’ve all been told that VR is the future of gaming; but is it really?

Having used the on and off for two decades, I’ll admit that this generation of VR is a leap forward from 90s VR in quite a significant way. The resolution and FOV alone is a massive jump. Technology is so much more advanced, which means the VR experience should be light years ahead. Anyone would think, based what you might have read, that you actually feel like you’re in the next dimension.

When the Oculus development kits went out they were impressive enough, but there was also nothing to directly compare them to as old consumer VR kits are effectively dead. However, the DK2 was a solid improvement over the DK1, so you would expect the CV1 or Vive to be another big jump. Sadly, this has not been the case. A jump, yes, but a less significant one than many may have been led to believe.

Gamers have to realise that a VR headset is not only a new peripheral but also a new platform. The platform aspect is being fueled by Oculus and their closed-market attitude towards VR. Oculus has been pushing for exclusives to sell through the Oculus Home platform, which they in turn hope will help to shift their brand of headset; very much like a console manufacturer seeks exclusives with developers to sell hardware. Only this time, the hardware is a lot more expensive than a console.

Palmer Luckey led the charge for the return of VR, but u-turned on how open he wanted the VR platform to be once the Oculus hardware started to ship. This has been most evident in the recent locking out of Vive users wanting to play games that are ‘exclusive’ to the Oculus Store. That Oculus DRM has since been circumvented for Vive users, thanks to ReVive.

For the past few weeks I have spent many hours inside the HTC Vive trying out all kinds of different games, some developed by small indies, some by larger studios, and the experiences have varied from appallingly bad to just about okay.

Okay is as far as I would go with the small pool of games currently available on either the Vive or Rift. There have been some valiant attempts at utilising features such as the Vive’s room-scale tracking and controllers, but the limitations of the hardware are still holding VR back.

Oculus opted to not support room-scale by aiming their headset at gamers who would be happy with a seated experience while HTC went the other way. The Vive has the advantage of catering to those who want room-scale now, but also desire the seated experience. The Vive is the more sensible purchase option of the two, but is also the most expensive. That sheer expense is likely to be a prohibitive problem.

The Vive is the closest we can get to a more complete VR experience, but it’s hampered by the (necessary) cable and a room’s physical space. This also limits what developers can do when it comes to creating games specifically designed for VR.

What I have noticed, and this can be compared to what happened in the 90s, is that the more impressive games are those that haven’t been developed as specific VR titles. This is because the gameplay comes first, and they are not having to work around the constraints of VR or trying to squeeze all of their mechanics into the limitations of VR space.

The Solus Project is a great example where the developers are starting to understand the Vive.

With there being such a shortage of games designed specifically for VR that are not just a shooting gallery of one kind or another, some developers have been taking advantage of the hype in the hope that desperate VR users will buy their shoddy, incomplete titles. Games such as Dolphin Defense are simply disgraceful. Others, like Hover Junkers, which have some neat features, just feel buggy and incomplete but still come with a full game price tag. It’s games like these that will help the demise of this generation of VR unless we start to see more robust products.

On the complete opposite side of the scale there’s The Solus Project,  Elite: Dangerous and Project CARS to name a few. Three games that work brilliantly on a standard PC that have had VR support added later. Sure, the VR support may not be perfect right now, but they are at least games with some depth and excitement.

There are ten pages of VR games currently listed on Steam and I think it’s probably safe to say that there are a handful in that list that are actually worth trying or spending money on. It’s not exactly a great situation to be in when you have an $800 USD headset sitting there.

Lots of VR “games”. Many of them rubbish.

What everyone wants to know is whether VR is the future of gaming, and whether the launch of these new headsets are about to kickstart a revolution.

The answer, quite simply, is no. VR is not ready yet. The tech has not yet reached a point where you would even consider spending any significant amount of time in a headset. The Vive and Oculus hardware reviews out there with scores of 8/10 are simply ridiculous as there’s nothing to realistically measure the current hardware against, and there isn’t even a decent pool of quality games to choose from that have been specifically designed for VR.

At this point in time VR is not the future of gaming, and if Oculus continue to lock games down to their platform, I can see this not ending well for consumers who have jumped in early. This generation is in real danger of going the way of 90s VR in terms of its gaming applications. It’s simply not good enough.

If anyone is seriously thinking about buying an HTC Vive or Oculus Rift, then sit tight. It’s not worth it right now. If you really must have one now, then of the two the Vive is the best option thanks to its room-scale and controllers.

Directly related to this article