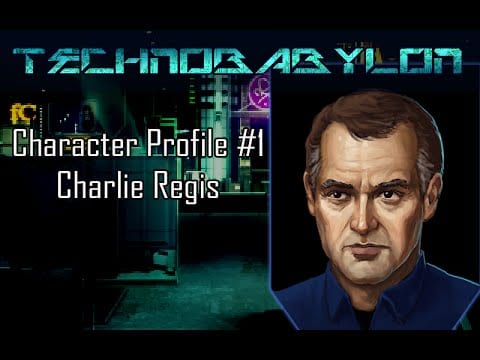 Technobabylon is a cyberpunk thriller set in a dystopian future where genetic engineering is commonplace, Trance has replaced the need for human interaction, and an AI named Central runs the city with its CEL police force keeping tabs on the populace. We’ll be exploring this environment as three playable characters, the first of whom – Dr. Charlie Regis – has been revealed today.

Regis is a geneticist and CEL case specialist, and “the tragedies of the past come back to haunt him 20 years after his wife’s death.” Which is never a good thing, really, particularly when the press release announcing the game states that the three playable characters are “about to meet their maker.” On the other hand, in a future where genetic engineering is rampant, that might be a little more literal than usual…

Technobabylon is being released in partnership with developer Technocrat, and if it sounds at all familiar, that’s because it was planned as a series of eight freeware episodes – three of which were eventually released. Wadjet Eye jumped on board to assist with a commercial release, which means that this’ll have new pixel art, professional voice acting, and a refined story and gameplay.

Technobabylon is due out in spring 2015. We’ll be getting introductions to the other two protagonists – Latha Sesame and Dr. Max Lao – in the near future.

Lords of the Fallen digital soundtrack added for free