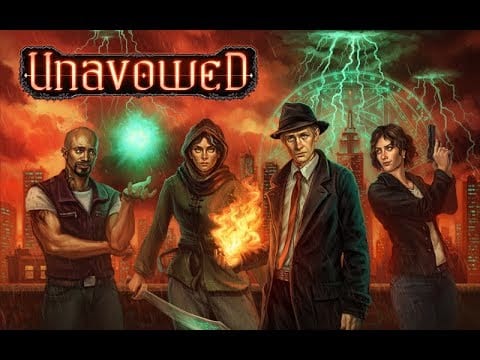 Wadget Eye’s next adventure is the Unavowed and there’s a first teaser trailer available for your viewing pleasure.

In Unavowed, an ancient society saves you from a demon possession but even though you are now free, you are alone, the world is in tatters, you have no friends, and are also wanted by the Police. Not exactly a great start. You now join the Unavowed to “fight against the oncoming darkness”.

Players will be able to choose either a male or female protagonist and play three origin stories with a branching storyline. There are also four companion characters to choose from, each with their own abilities and talents.

For those less than impressed with the visuals of previous Wajget Eye games, this one comes with “twice the resolution” of previous games. They also say it comes with all the “usual guff” such as voice acting, commentary, and original music.”

Tim looked at Shardlight last year, and although he enjoyed it, he said it was tasty but not quite satisfying. Perhaps this time  Unavowed will deliver the full package.

You Can No Longer Buy Steam Games with Bitcoin