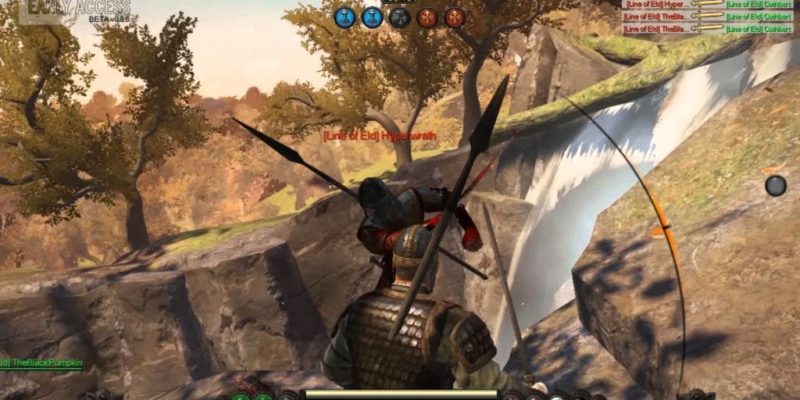 Fatshark’s War of the Vikings has been in Steam’s Early Access system since at least October of last year (when IncGamers first previewed the game and dubbed it War of the Horny Hairy Blood Men.) That’s a good six months of testing, iterating and responding to the thoughts and play-testing of the community, many of whom made the jump from previous Fatshark title War of the Roses. The game has certainly expanded since I last played it, with an additional mode of play and more weapon choices available, but as I hopped across the servers I heard concerns relating to optimisation and latency echoed by different players time after time.

These weren’t post-death sour grapes about lag, they instead had a tone of weary resignation. As if the same points had been repeated at length throughout War of the Vikings’ stay on Early Access. After playing the game for the past few days (pre and post launch) and experiencing periodic hard crashes, server drops and latency quirks, I’m in agreement that the side of the game popularly referred to as ‘netcode’ could use some work.

The problems are not ruinous. Outright server failures were rare, and latency issues don’t prevent the higher skilled players from rising to the top. But in a multiplayer only title with a melee system based around timing and precision, a split second here and there can make a frustrating difference. It leads to apparent hitbox inconsistencies and a percentage of deaths where you’re not quite sure whether a lack of skill (in my case, it was usually this) or latency hiccup was to blame.

War of the Vikings joins titles like Chivalry, Mount & Blade and the aforementioned Roses in what could loosely be described as the medieval precision combat genre. If that sounds rubbish, I’m sorry. I just made it up. Anyway, these games go beyond simple hacking and slashing, giving players a variety of attack and blocking moves to approximate the back and forth of close quarters warfare. The War of the Vikings system allows for left, right and overhead slashes of varying strengths with parries to match, and the decision of whether to opt for a shield or a two-handed weapon. Bows and throwing weapons are in here too, for those who prefer to keep to the side lines or those moments when an opening for a distanced attack presents itself.

Rounding off your combat options are a dodge move (which can be combined with an attack courtesy of an early perk) and special attacks. These fancy moves deal a lot of damage, but have a fairly long wind-up time to act as a “tell” for the observant foe. The inclusion of a stamina bar prevents people from spamming them (or things like the dodge move) all over the place. Weapons have a nice sense of weight to them, making it especially satisfying to cleave through someone with a sword or send a Saxon flying with a new axe attachment between their eyebrows.

That archer is about to shoot me while I take a screenshot of Ice Floe, one of the maps added for launch. Doesn’t matter though, we’re about to win.

To an external observer, War of the Vikings matches probably look pretty chaotic; a kind of melee maelstrom which anybody could drop into, swing a sword about and emerge victorious. This isn’t really the case. To get much out of the game it’s necessary to at least grasp the basics of the melee system and (ideally) get familiar with one or two of the weapon types. At first your character will feel slow and ponderous. Everybody else’s hits will seem to connect much faster, while yours are still charging up. Once you get into the habit of taking shots after parrying an opponent and figure out how to position yourself so that your swings are travelling the minimum distance from wind-up to impact, more success will start to come your way.

For me, it also took a while to get used to the third-person perspective. With the camera positioned at a (customisable) point behind your burly Viking or snooty Saxon it can be difficult to gauge the distance at which a sword, axe or dagger blow will connect. Maybe I just have depth-perception problems, but each time I returned to the game it took a short while to adjust to where exactly I needed to stand in relation to another player to get connecting blows.

War of the Vikings’ extended time in Early Access also means the game already has a community of semi-veteran players. Unless there’s a massive influx of new people on release day (which will create a kind of two-tiered system,) the learning curve is going to be fairly brutal for anybody starting the game for the first time. Fatshark’s current attempt to ease the transition for newer players (not exactly an ignoble goal) is to put a slight delay on the parry, meaning even the most skillful player cannot block everything. But this hasn’t gone down well with a chunk of the established player base, and leaving that mechanic in risks pushing away the title’s main supporters.

Yep, Conquest mode pretty much ends up as a melee scrum too. As it should.

Maintaining people’s faith and enjoyment in the central combat mechanics is crucial, because absolutely everything in War of the Vikings revolves around them. The game only really has four different modes of play; Team Deathmatch (which is what you think it is,) Arena (where precise combat matters even more, as it’s a smaller mode with a maximum of 5v5,) Pitched Battle (no respawns) and Conquest. This last mode has been added since I previously played the game and is of the usual take-and-hold points on the battlefield style which, again, is largely about direct melee combat. Pitched Battle may also be new, but doesn’t seem all that popular on US servers as I could barely get a game of that type.

In Early Access only four maps (Cliffs, Monastery, Forest and Docks) were in rotation for the Deathmatch and Conquest matches, with another (Sanctuary) popping up for the closer-quarters Arena modes. Launch saw the addition of another five across all modes (Stronghold, Tide, Ice Floe, Ravine and Ruins,) which gives the map cycle a healthy boost. Both old and new maps do a decent job funnelling people into melee clearings and providing cover for archery-inclined types.

Progression is based on a levelling system, though the requirements to unlock a substantial amount of the load-outs and weapon sets are not too demanding. Level one players only have access to a default warrior (sword and shield,) with default champion (two-handed axe) and skirmisher (the bow) following pretty swiftly. By level ten, which only takes a couple of hours, you’ll have a pair of custom load-outs and the chance to unlock pretty much any perk you please with in-game gold. These include things like an automatic stamina refill on each kill. Beyond level ten you’re mostly playing to accumulate more gold, which can be spent on fancier-looking weaponry that (as far as I know) is otherwise identical to the cruddier looking starting gear. The rimmed shield is said to have a slightly larger protective area than the starting one, but that’s about it.

Prince would kill for this shield. I mean, a prince will probably kill me for it. A Saxon prince.

Amusingly enough, the ultimate (and highest level/most expensive) prizes are things like taunts and beards. This feels like the right way to handle an unlocks system in a game like this. Everybody gets access to the basics within a short time, while the real dedicated few can battle it out to have the most impressive Viking facial hair. Shield customisation is possible too, which meant I could sport a fetching purple number in record time. There’s clearly further scope in this area, as right now there’s only one “face” option and a pair of helmets on offer. Previous title War of the Roses ended up going free to play, and the customisation set-up here could quite easily be converted into some kind of cosmetic store if War of the Vikings takes that option at a later date.

Combat is the fundamental heart of War of the Vikings, and it’s close to working as intended. The system feels fluid enough that skilled players can combine movement, timing and precision to good effect, but also sufficiently vicious. Even a crude double-handed axe swing can land with bloody impact, and the periodic requirement to “finish off” downed opponents gives the game a touch of merciless Viking-era warfare. Advanced players feel aggrieved by the parry delay, but even newer ones will be irritated by latency, curious frame-rate stutters and server issues robbing them of potential kills.

These problems aren’t on the level of Battlefield 4’s launch calamity, and it’s quite possible War of the Vikings will iron them out with patches, but you have to wonder what the six months of Early Access were for if not tightening up the netcode until it was close to flawless. The majority of the community seem to know exactly what type of game they want to be playing, but the release version of War of the Vikings just isn’t quite at that point yet. This longship could still steer back on course for the rich pickings of the multiplayer mainland, it just needs to fix the persistent leaks in the hull.

The Last of Us Grounded DLC announced

By Will Backus15 hours ago
Reviews