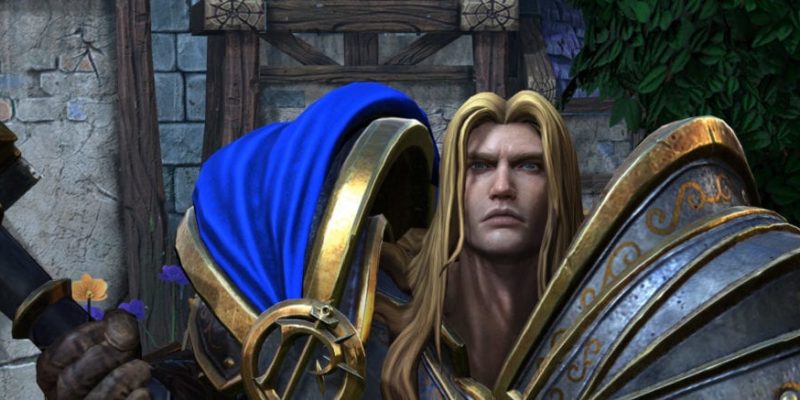 One year after the original announcement of Warcraft III: Reforged at BlizzCon 2018, the playable beta is out and the armies of Azeroth can now potentially clash in glorious 4K. Blizzard’s classic fantasy RTS has more than a new coat of paint. Blizzard’s classic games team has remade characters, rebuilt assets from the ground up, and made various balance changes under the hood.

Nostalgia can be a funny thing. We often end up remembering things from the good old days as being better than they really were. Warcraft III: Reign of Chaos crashed in on a green meteor from the sky back in 2002 to suck up all the time of my teenage self. Its 3D models weren’t even great for the time, but I still “remember” them as looking better than they did. Only looking back on Warcraft III years after putting it down did I realize how much work my imagination was doing.

But the game’s fantastic single-player campaign did plenty to spark the imagination, and Warcraft III‘s warriors managed to ooze character thanks to Blizzard’s attention to detail. The way the units idly shifted their weight and brandished their paddle-like weapons in clunky paws, the humorous barks, the clang and cries of battle…WCIII‘s armies had some kind of life beyond their blocky, angular bodies.

Warcraft III: Reforged has the potential to bring back Warcraft how we imagined it, so I fired up the Reforged beta to take a look.

It’s the little things that make the difference 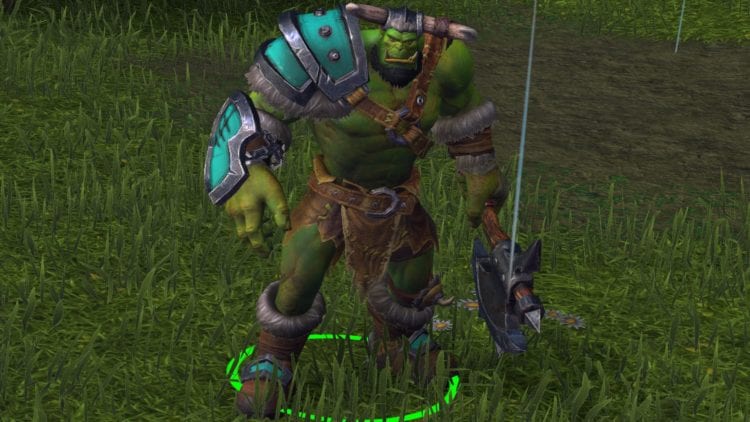 Look at that grunt. Just look at my beautiful green son. A close look at the basic infantry for the orcish horde makes a good case for the work Reforged is doing here. The pink scars cross-crossing his muscles, the notches and chain on that gauntlet/shield, that little spiked kneepad. The armor damage. The knuckle detail. This is the grunt that existed in my head all those years ago. 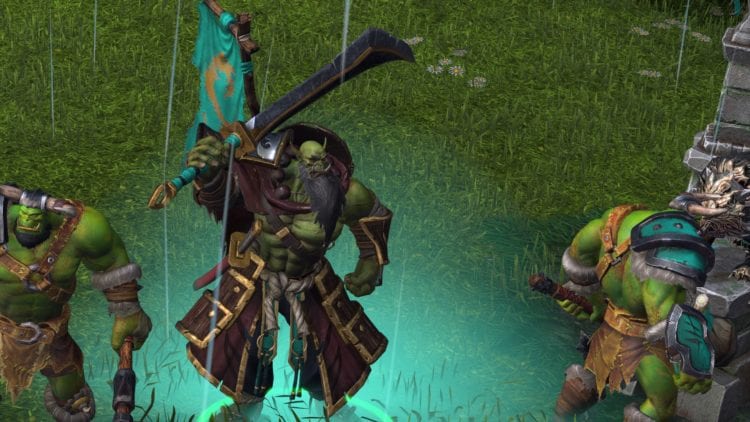 Heroes get new looks along with the basic troops.

At the time of writing, the playable races in the Warcraft III: Reforged beta include orcs, humans, and undead. On the whole, the units of all the races have been touched up with plenty of nice little details that highlight the race’s character. The orcs, trolls, and tauren are scarred, muscled, and pierced. Their blades are notched and their armor bristles with spikes. The unit personalities shine in the idle animations, like when the poor peons toss their axe and fumble the catch. 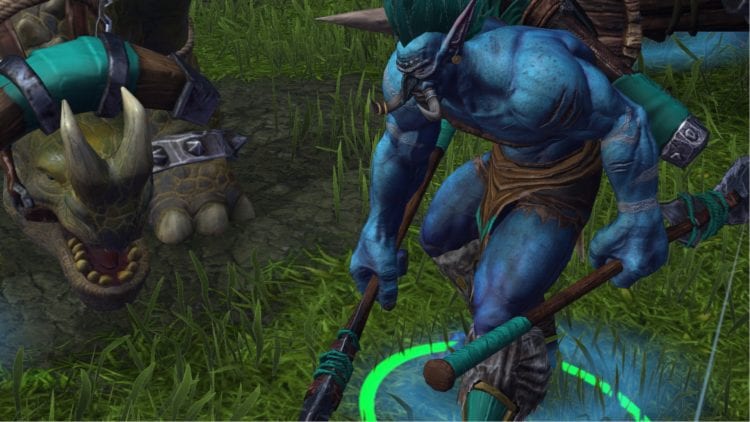 And the berserkers are suitably manic-looking.

The humans and other races of the Alliance are also looking in tip-top condition. Armor looks solid and battle-worthy, with embellishments and some light damage visible. Clearly, they take more care of their equipment than the orcs. The new textures for facial features and body shapes certainly have the Alliance soldiers looking more… human. And elfish. And dwarfish. Again, lots of nice little touches really impress in the idle animations. The footman occasionally relaxes and shows his face, as you can see below. 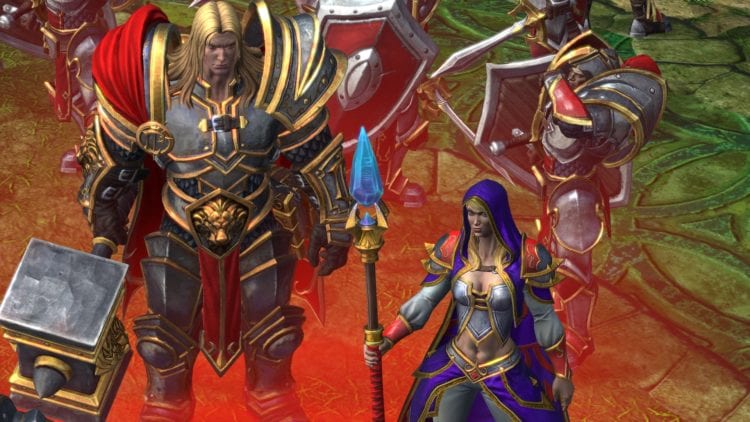 Of all the factions added so far, only the newly introduced undead struck me as still being a bit rough around the edges. Many of the new models are suitably gruesome and eldritch, but contrast, say, the mouth detail of the abomination below with the thing that’s wrapped around its arm. 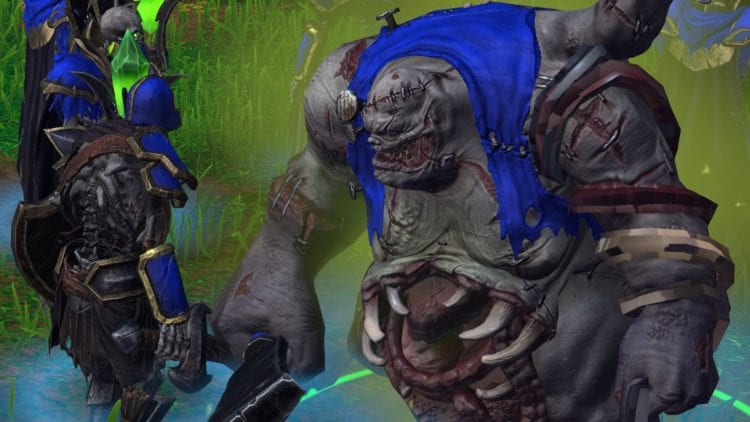 Of course, the varied creeps and critters that populate the world have also had a makeover. Check out the shields on these cute scaly sacks of XP. 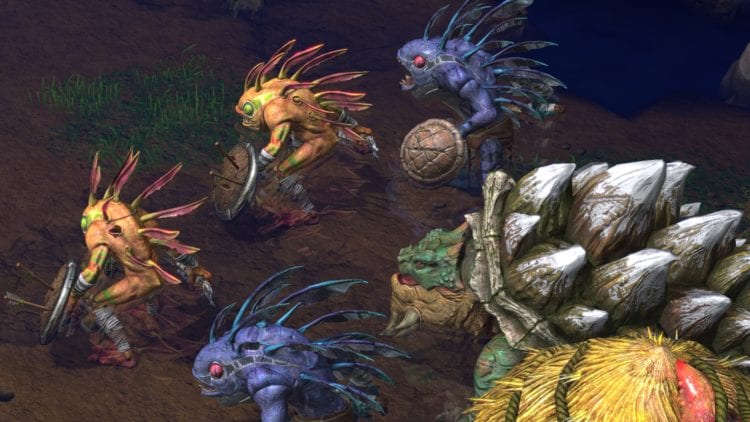 I almost felt bad about killing them.

Not grimdark, but with a touch of grit 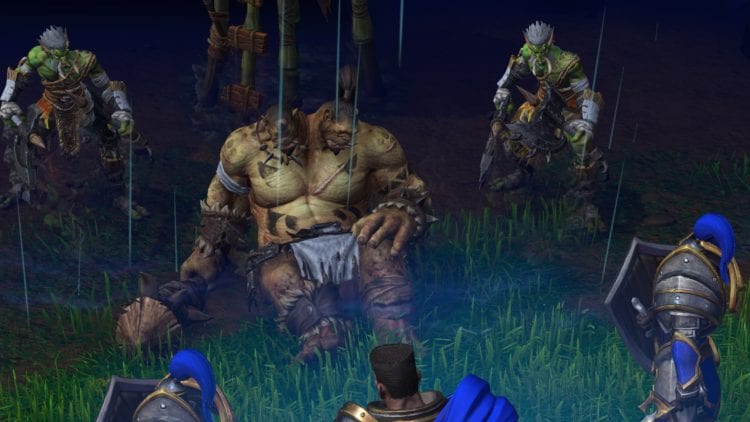 Sneaking up on sleeping creeps.

Art direction has always been a big part of what distinguished the Warcraft franchise. The original game had quite a generic setting, but from Warcraft II onwards, Azeroth built a stronger visual identity of its own thanks to Chris Metzen’s illustrations and creative direction. The visuals of the classic Warcraft RTS games were always cartoony, but with a dark edge that seemed to soften in the transition to MMO.

Warcraft III: Reforged‘s detail brings some realism, but not too much. It’s no Warhammer: Total War. But the more detailed models add a bit of welcome edginess to the colorful combat of the classic game and extra weight to the clash of steel and claw. 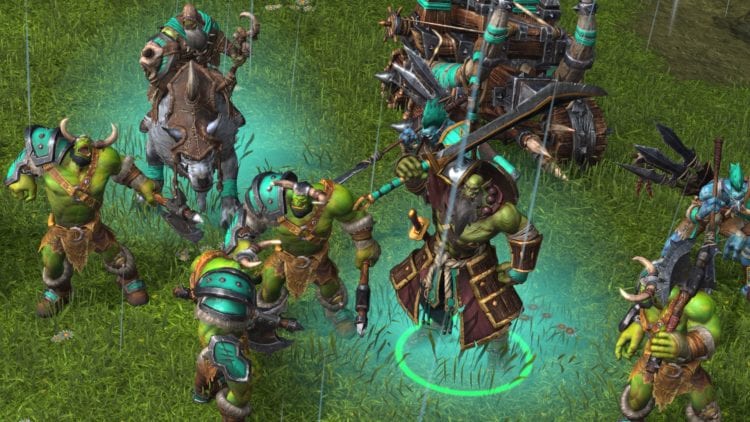 One of the Reforged team’s mission statements was to bring the appearance of some locations and characters more in line with their World of Warcraft counterparts. I’m sure I wasn’t the only one who shuddered at this. WoW took Blizzard’s already cartoony and exaggerated art style and took it more and more over the top. Add to that the content creep of new gear to distinguish different MMORPG characters and it can get quite garish. One of the most significant signs of this is something I like to call “pauldron poisoning.” 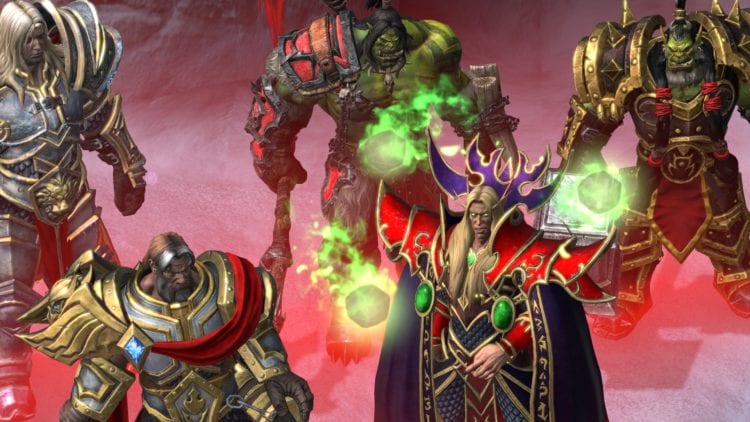 No one’s shoulders are safe.

It’s still a good rule of thumb that you can tell how important a character is to their faction by the size of their shoulder pads. But by and large, even if the likes of Thrall and Arthas are lugging around some truly back-breaking armor, the overall style is more restrained than I expected. Locations like Ogrimmar, Silvermoon, Stratholme, and Dalaran will apparently look more like their WoW counterparts, which should provide some extra nostalgia for the MMO players. An initial goal to rework the campaign story with new voice actors to bring it more in line with WoW has been scrapped by Blizzard. 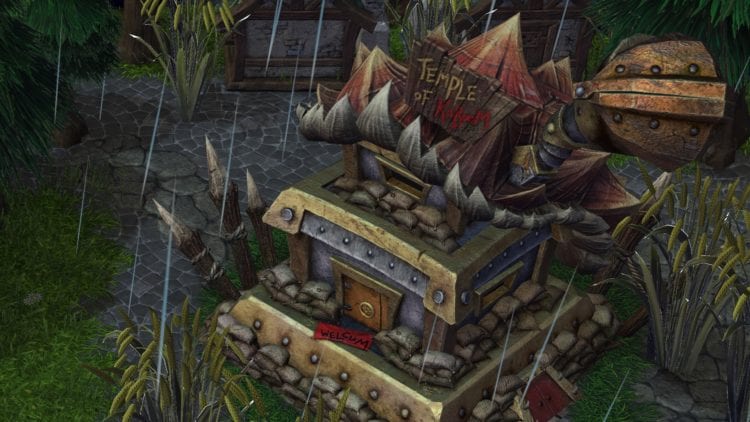 Warcraft III: Reforged isn’t just updating old models; it’s adding a few extra ones. Certain heroes will spawn in one of several variants. That means that your death knight, wizard, or blademaster won’t look the same as all the others on the map. Right now it’s not clear just how many variations we’ll get to use, but the female death knight variant is already playable in the beta. Heroes are a focal point of Warcraft III armies, and it’d be nice to not have all heroes on the map with the same generic look. 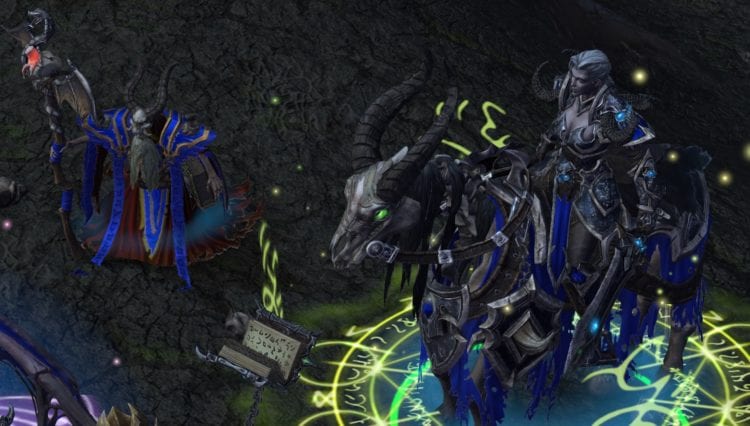 Campaign characters will be more unique-looking. For example, in the classic game, the dreadlords mainly looked the same. Only faction color distinguished them. But some rooting around the world editor shows unique models for the different personalities. Across the board, it looks like previous “palette swap” units are receiving their own models. 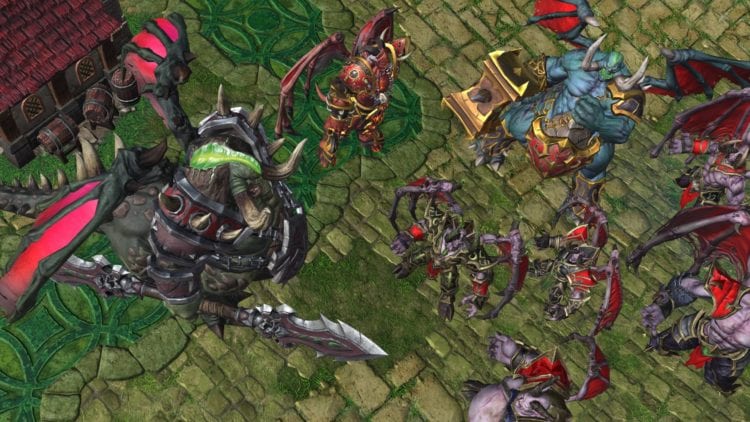 A council of demons showing off their new threads. 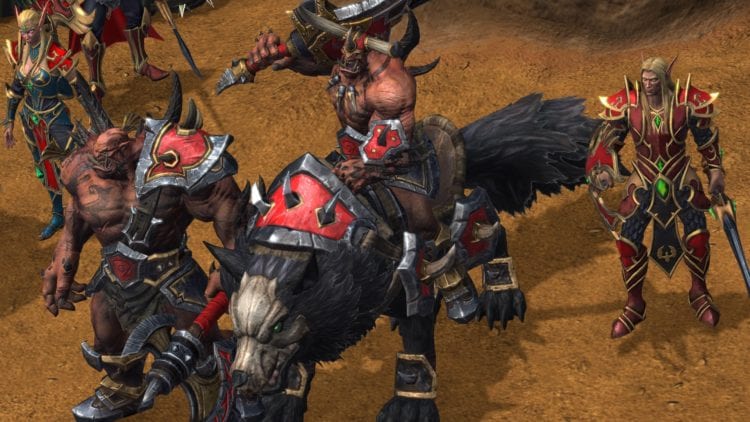 A new life for old soldiers

I didn’t think that I’d be looking forward to a remastered Warcraft III in 2019, and I would’ve guessed that a WCIII remake would be pointless. Yet the RTS genre hasn’t quite managed to move past its golden age. I’ve played (and liked) the new Spellforce 3 games while still thinking there were things that WC3 did better. The new RTS A Year of Rain also doesn’t stray far from WCIII‘s formula. Age of Empires II just got its definitive edition, so maybe it’s just time to play the greatest hits again. 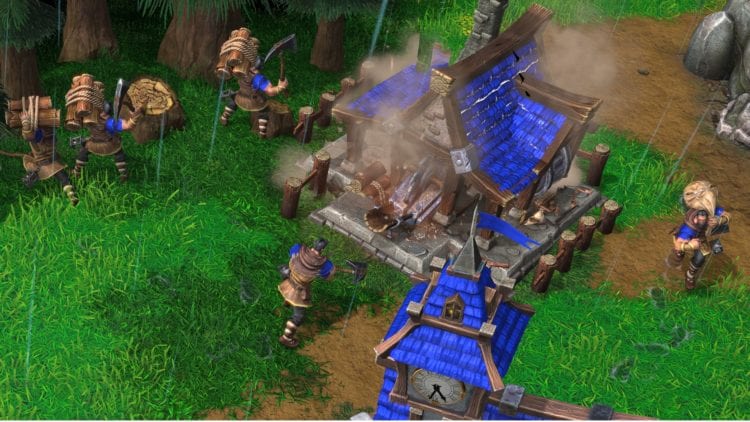 It’s hard to be disappointed by Warcraft III with modern graphics. The classic gameplay and campaign stand the test of time, and the potential of creative custom games to reach a new audience is still there. But some initially promised features, like remade campaign cinematics and additional single-player story content, have been cut or scaled back. It’s also been confirmed that it will be fully compatible with classic Warcraft III, with a toggle for the Reforged enhancements. It’s good for old-school fans but somewhat limited for those who were hoping for more novelties.

Warcraft III: Reforged is set to release in 2019, but it’s still possible that it will slip into next year. As fun as it’s been to play the beta, I’m all in favor of the team taking its time with this forging.

By Jason Rodriguez3 days ago
Patches