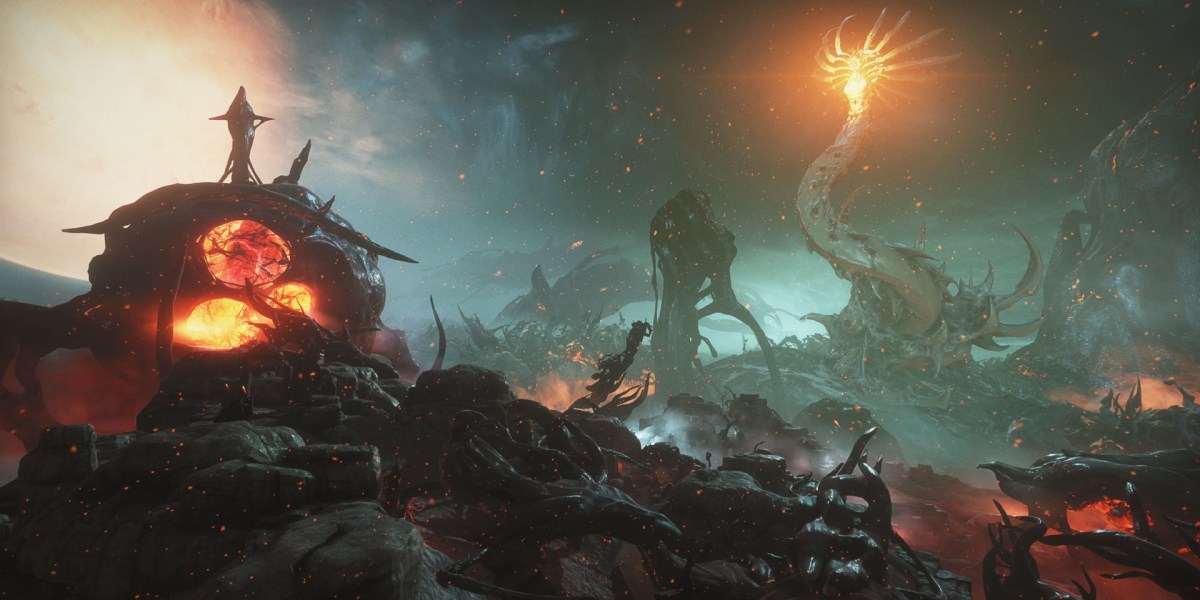 TennoCon, the big event for all things Warframe, like all events this year, has made the move to an all-digital format. The main showcase for the event this year was the next big expansion for the game, called The Heart of Deimos. The day before the event, PC Invasion sat in on a stream hosted by developer Digital Extremes. During which we got to take an early look at the expansion with a 30-minute demo . We are going to go over everything we saw and what players can expect when the expansion rolls out this month.

We started the demo off with the biggest addition to the game, the Helmith Chrysalis. The Heart of Deimos takes place on the planet of the same name, which has been completely overrun by the Infected. So everything in the world is gloopy, gross, and full of puss and slime. It’s like if every final boss in a Resident Evil game became a planet. Players have access to one of these Helmith creatures, and it incorporates a major change to the game’s systems. By feeding this fleshy, Audrey II lookalike one of your frames, you can extract an ability from it and put it on any other frame that you want.

This ability is huge for Warframe, as it gives you an even deeper level of customization. Basically one of each frame’s abilities is designated as transferable. When you feed the frame to the Helmith, you can then add that ability to another frame by swapping out an existing ability. Keep in mind however, that frame you sacrificed is gone forever once it is eaten. But Prime frames cannot be used, so you will never “run out” of frames. You can only use one of your extra frames, something that seasoned players will surely have oodles of lying around. Other configurations of your frame can still use you their standard moveset, so it won’t permanently change it forever. Also, by feeding the Helmith other items, it can offer unique bonuses in addition to the ability swapping. 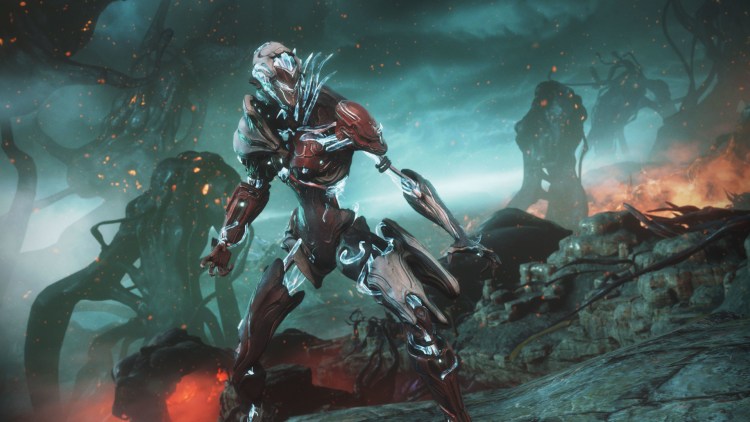 A whole new level of customization

The expansion explores the Infected faction by challenging players to prevent the the creatures from completely overtaking the heart of Deimos. If that happens, it would spell disaster for the universe. When you first get to the planet you are greeted by a robot that looks like the Mayor from A Nightmare Before Christmas. One side is serious, named Loid, and the other humorous, named Otak — each head spinning around mid-conversation for verbal hijinks.

Your new bipolar friend asks you to head to a cave where some infected are to take out their hive. On the way, we get to see some flying fish, a new addition to the Deimos expansion. We get to see new enemy types along the way including one Infected that can hurl other enemies at you and spin webs. These hives also contain new resources that players can use for all sorts of perks. Later, we watched as a large centipede-type creature was taken out by attacking the fleshy pods on each of its sides. During one of these skirmishes, we see the frame using the ability it was given by the Helmith that it previously didn’t have — that being Volt’s Shock. In the caves are unusual fast travel points, where a weird half-flower, half-bug beast can suck you up and spit you out back on the surface.

After taking out the hive we get to see something really cool, the Velocipod — essentially a living hoverboard. You will see these big dragonfly-type creatures roaming the overworld, and you can jump on them and fly around for faster travel. In fact, you can even fight while riding, using your secondary weapon to fire at enemies as you surf around the planet. 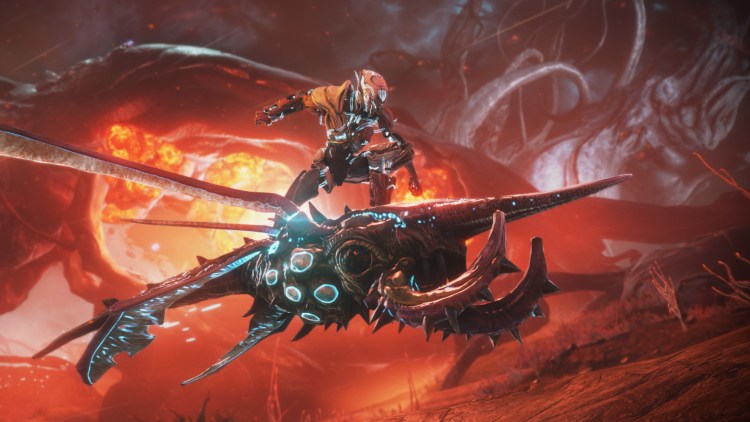 Soon, we reach the Necralisk, a void research enclave where we encounter “mother.” The matriarch of the Entrati family, mother is one of the last remaining members of the royal family of Deimos. She is almost completely infected, and appears in front of you emerging from a fleshy cocoon. This is the headliner quest of Warframe‘s new expansion. We are also shown very briefly a special hidden area that contains eight different modules that explain the history of Deimos and the Infected — something to note for you lore fans.

Back outside again, we encounter another group on Infected on our way to another hive. These enemies are released from an Infested drop pod that appears on the map. One of them is a leech-like creature that sticks to your frame and must be hacked off. While dealing with these enemies, you are also waiting for a weapon to fully charge at a nearby drop. Once you grab the weapon, it fires off a shot that can blind the Infected. Blinding them is a smart strategy, allowing you time to make a quick getaway or find a new attack position.

Once that is over, we witnessed something truly unusual. A giant orange worm, I am talking Kaiju-sized, which emerges from the ground and fires a beam at another giant worm — this one blue. We are told that these two creatures are locked in an eternal battle on Deimos. The planet itself, as well as enemies, will be affected by which of these giant worms is currently taking the lead. It is unclear how much, if at all, we can participate in this clash of the titans. But it is an intriguing concept that will affect your game as you make your way across Deimos. 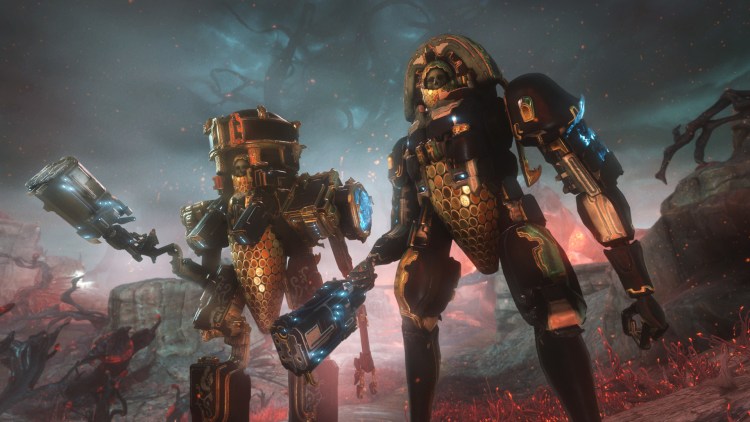 Putting the ‘ech’ in ‘mech’

Before the demo ended, we are shown what is probably the most interesting new addition to the new Warframe expansion. That being a giant exoskeleton suit that your frame can pilot called a “Necromech.” Players will get their own unique Necromech that they can upgrade and customize as they see fit when they first log into Warframe and begin the Deimos quests. These suits can be summoned at will to aid you in battle, and the team plans to let you use them in areas outside Deimos down the line as well. This particular Necromech that was shown had an artillery mode that it used to blow away a group of Infected, but yours can be different if you want.

The Heart of Deimos will release this month on August 25. But, for the first time for a release of this size for Warframe, the release will be simultaneous for all platforms. Players on PC, Xbox One, PlayStation 4, and Switch will all be able to start exploring the world of Deimos together at the same time. Digital Extremes also said that if this simultaneous release goes well, that it plan to do it for future large expansions as well.