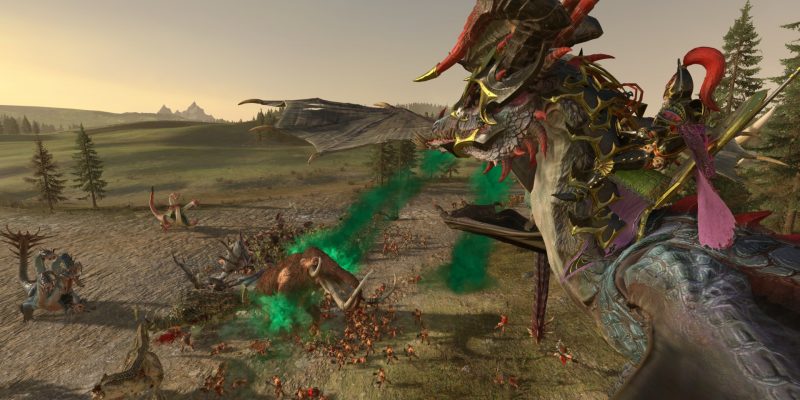 There are some specific actions that you can do early on in your Total War: Warhammer II Vortex campaign as Rakarth to get some extra Monster Pen units.

First, attach the Sorceress to your army and defeat the nearby Skaeling force. You should get a couple of Harpies.

Then, switch to raiding stance. You’ll obtain a couple of Giant Wolves on your next turn once you do this. Also on your next turn, capture Troll Fjord to get a Feral Mammoth for your Monster Pen.

Note 1: I’ll discuss Monster Pen units and how to obtain all of them in a separate guide.

Note 2: Don’t forget to level-up Albion’s main building on turn 1. Once it’s been upgraded, spend roughly 3,200 gold to construct the Restored Port of Nagronath. Once Rakarth reaches level 2 and the port building is up and running, you’ll be able to do the Whip of Agony quest battle. 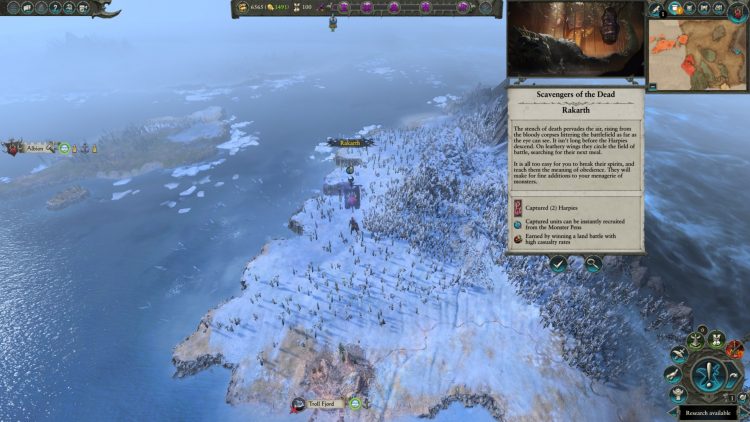 Diplomacy and confederation with Karond Kar

My suggestion for turn 1 would be to enact a trade agreement with Cothique and Yvresse. Sure, it’s heretical for the Druchii to buddy up with the Asur, but that should keep those two factions off your back for a few turns.

Likewise, you can have a trade agreement and a non-aggression pact with Aghol. Oh, and don’t bother with the Scourge of Khaine and Chrace. 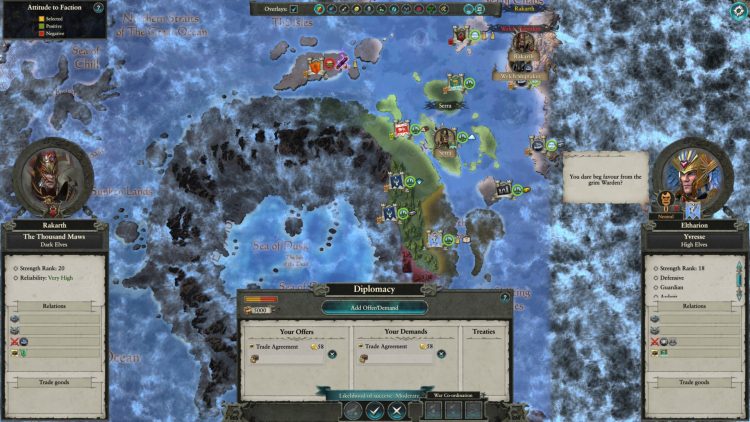 One more thing that needs to be mentioned is that Karond Kar, Rakarth’s homeland, is already buddied up with you (with a trade agreement to boot). Sadly you’re too far away from it and you don’t have visibility on its surroundings.

Still, Rakarth does get a mission called “The Dragon & The Kraken.” It requires you to amass 2,500 captives in battle within 40 turns. Doing this allows you to confederate with Karond Kar.

The problem is that this requirement can take a while to complete even if you’re farming rebellions. Worse, Karond Kar often gets triple-teamed by Clan Rictus, Naggarythe, and Tiranoc. I’ve even restarted my Total War: Warhammer II Vortex campaign a few times, and, unfortunately, Rakarth could only look on helplessly as Karond Kar gets mauled in less than 20 turns. 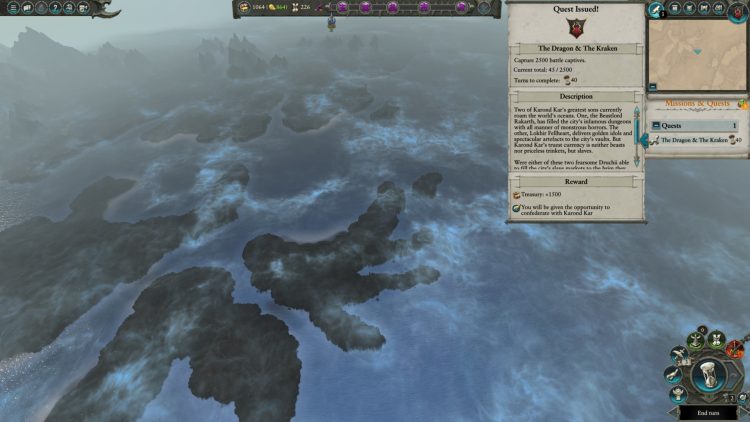 Apart from “The Dragon & The Kraken,” here are some other missions you’ll have as Rakarth:

Anyway, let’s say you switched to raiding stance at the end of turn 1, and you captured Troll Fjorn on turn 2, that means your Monster Pen should have 2x Harpies, 2x Giant Wolves, and 1x Feral Mammoth already. With these and a couple of extra Dark Elf units, you can go ahead and conquer Pack Ice Bay by turn 4. Make sure you choose “Loot & Occupy” or “Sack” to gain captives, gold, troop replenishment, and a brewing rebellion.

From turn 5 to 7, you’ll be heading back to Albion to lay the smackdown on that rebel army. Around this time, Cothique and/or Yvresse should break that trade agreement. You can swoop down with your army and capture their settlements in a while. If Eltharion made this mistake, you can beat him down while his forces are done being mauled by Grom the Paunch and Aranessa Saltspite. Alternatively, you can go for the weaker Chrace, though you’d be sandwiched between several High Elf factions including Avelorn/Alarielle. An even riskier idea that has an amazing payoff is beefing up your forces and beelining for Eataine/Tyrion. If you can take him out, you’ll prevent him from snowballing towards the mid-game.

In any case, try to fight all your early-game battles manually since your Reaper Bolt Thrower, War Hydra, and Feral Mammoth will make a huge difference. Plus, in a short while, you’ll even gain more monsters thanks to the Monster Pen mechanic and Whip of Agony quest battle. 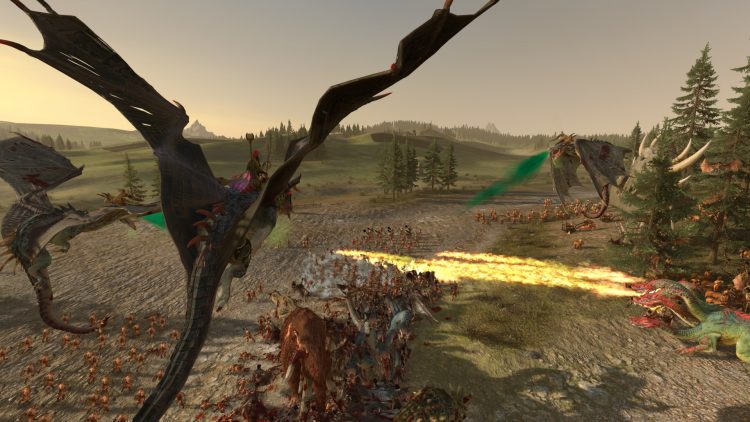