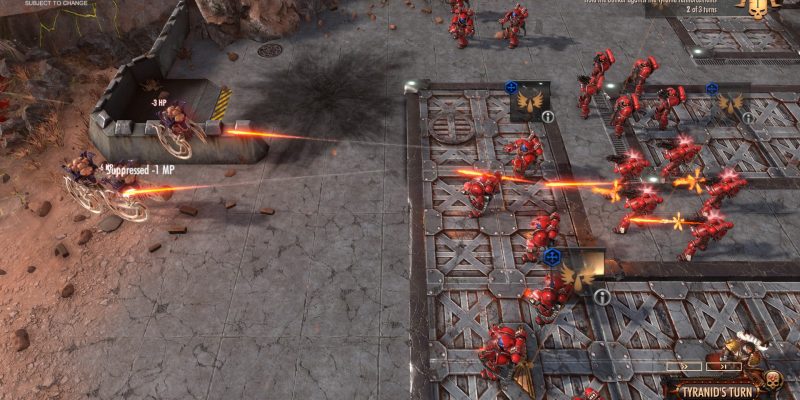 Few companies are as spindrift when it comes to doling out its IP to video game developers like Games Workshop. But sometimes, it does manage to land a hit (rather than just a scoring a mobile game dev with one game under its belt). That’s right, I’m previewing Warhammer 40,000: Battlesector by the mad lads at the Black Lab Games, the creators of absolutely amazing Battlestar Galactica: Deadlock.

However, this game doesn’t feature any Cylons. Instead, you get to command the forces of Blood Angels, probably one of the best Chapters of Space Marines, and fight the Tyranids — definitely one of the worst factions in 40K. The campaign is set right around the time when relief fleets brimming with Primaris Space Marines reach the Blood Angel homeworld of Baal as it’s being gnawed upon by the Tyranid horde. The rest – killing bugs and seeing how regular Space Marines react to their new Primaris brethren – is for you to experience.

It’s not some silly mobile game

Now, with a title as nondescript as Warhammer 40,000: Battlesector, you’re probably expecting some sort of freemium mobile nonsense. Luckily, that is not the case, as the game hews most closely to another good 40K turn-based tactics title hatched under the wings of Slitherine: Warhammer 40,000: Sanctus Reach. It’s like a prettier, more polished version of that game, featuring Primaris Marines. 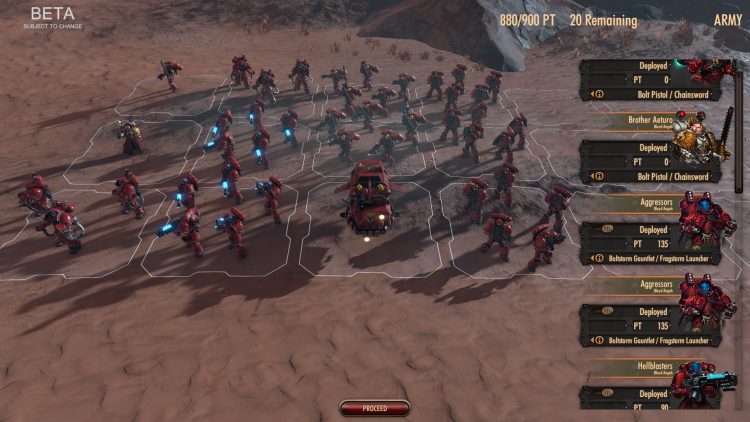 It also features the smollmarines

The preview version of the game is short, featuring two brief tutorials and a couple missions. I didn’t get to see the campaign, the army building, and the necessity to preserve your forces between battles. All that jazz will be in the final version. What I did get was a chance to kill disgusting aliens bugs, squad after scuttling squad.

In Warhammer 40,000: Battlesector, your units will have a pool of movement points (MP) and action points (AP). You’ll have multiple points of former and only single of the latter (unless you’re a hero). As long as you have MP, you can move-stop-move-again as much as you want. Action Points are what you spend to carry out important actions (so, you know, killing), go on Overwatch (which depletes your MP as well), or to just extend your movement range.

It’s a fine system, and it works well in the game. I heard the developer say that Warhammer 40,000: Battlesector is a faster game due to you being order to units while others are moving. It was a bit funny to me, but it actually works out in practice. You don’t need to click to hurry your Space Marines along (with associated Benny Hill–speed animations), just order another unit to do something while the first one is finishing their action.

When it comes to combat, range, cover, and elevation all have their part to play, influencing accuracy and damage. Individual models in a unit have their own health tracks, and losing models makes a unit weaker in battle. It also means that you can get lucky, both with incoming fire spreading out across your Marines, and by focus-firing one venomthrope (of three in the squad) down.

It’s a pity this system doesn’t lend itself to giving units a mix of weapons or 40K’s famous customized leaders. But that’s basically standard with every turn-based game featuring squads. And this works with Primaris, which traded Space Marine flexibility for being able to do one job well and then hoping you won’t be called on to do something else. 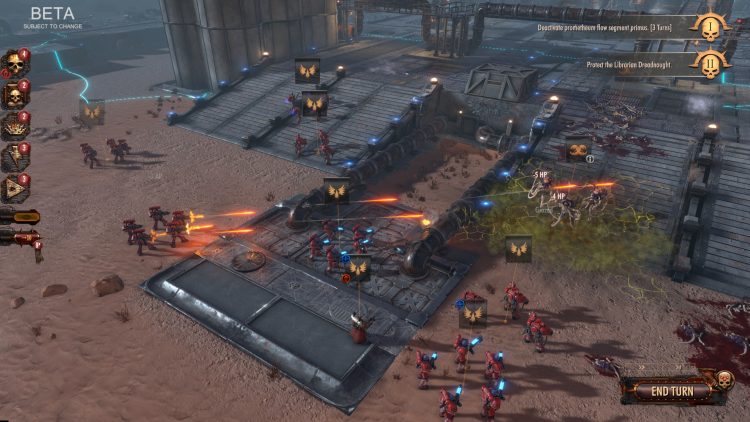 Though when it comes to absolutely slaughtering gaunts at appreciable ranges, Intercessors can’t be beat

But Warhammer 40,000: Battlesector isn’t just the show of Belisarius Cawl’s early access Primarines. Aside from the Primaris variants seen in the Dark Imperium box, we’ll have Librarian Dreadnaughts, Sanguinary Priests, good old-fashioned Assault Marines, and even Land Speeders. Our protagonist, sergeant Corleon, is an Assault Marine, but I’m sure he’ll get horribly maimed by a Tyranid during the campaign, only to be saved by crossing the Rubicon Primaris. You know, the complicated, not-always-successful process of upgrading a regular Space Marine to Primaris, which, in the fluff, seems to be the go-to procedure to save mortally wounded heroes.

This mix of forces works well! It’s very much fun to sic Intercessors on Gaunts, and seeing half the squad of aliens go down in a hail of fire. It’s enthralling to engage the jump packs of Assault Marines and cut down a squad of unsuspecting Xenos. Land Speeders, while not the absolute flying wood-chippers that they become in Sanctus Reach, are good, fast units, at their best when hosing down units at range.

The fact that combat is resolved on a model-by-model basis (rather, unit by unit), it means that Corleon isn’t deleting a pack of Gaunts a turn. Sure, he has two AP to conduct two attacks with, but this just means that he’ll kill two Gaunts. Better send him against something beefier, and leave the chaff for the more BRRRT-oriented units. On the other hand, it is ever-so-slightly annoying that your shooters have zero melee ability. I mean, Space Marines should be masters of all combat skills, and Blood Angels are one of the most punch-happy chapters under the sun. Why can’t my Intercessors kick some disgusting bugs in the face? 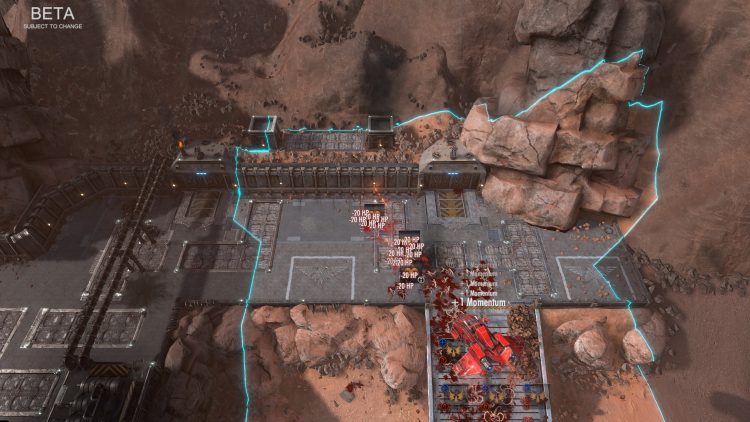 But even then, Warhammer 40,000: Battlesector is pretty much up there with getting what the accursed Eternal Crusade never could: no single enemy trooper is a match for Space Marines. There are two truths about Tyranids: they are trash, and they are garbage. In this game, they can do a lot of damage if you’re not careful, but an Intercessor squad can aerosolize a full gaunt squad with a single grenade (great throw animation, by the way). Tyranids are probably neck-and-neck with Daemons as far as boring foes go, but hey, killing them can be a good experience all by itself. That’s what helped me enjoy Space Hulk: Deathwing, after all.

It doesn’t hurt that Warhammer 40,000: Battlesector is a good-looking game. Sure, it may not be AAA quality, and your PC won’t melt into slag to run it, but I’ll take it. The models look great once you zoom in, and the only criticism there is that they don’t have variation within the unit you’d see in Warhammer 40,000: Dawn of War or Total War. Maybe this is something that we’ll see in the full version? The interface is decent, and the animations are nice. 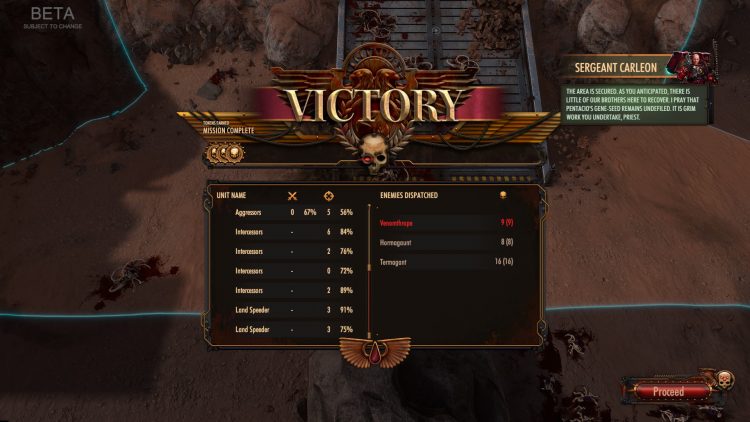 Fully voice Space Marine grumbling before AND after the mission!

And the audio holds up. The mission intros are voice, and there are actual unit barks. They might not have the iconic vox distortions of Dawn of War, nor are the lines that snappy (actually, a lot of them do the Total War thing of shouting out their unit type when selected), but hey, unit barks! You can really feel the power of the bolt rifle by the way it thunders, and chainswords are finally getting some love via their revving sounds.

I’m happy any time a turn-based game comes out with audio that isn’t terrible. Decent unit barks seems like something you wouldn’t even dare to ask for.

All in all, Warhammer 40,000: Battlesector is building up to be a fun game. As much as Space Marines are overrepresented on the tabletop, they are what got me into 40K in the first place. And I love to see them decently represented in video games. Here’s hoping the development time between now and the release will give me all the reasons to heap nothing but praise onto the game.

By Andrew Farrell60 mins ago
Previews

By Jason Rodriguez6 hours ago
Previews