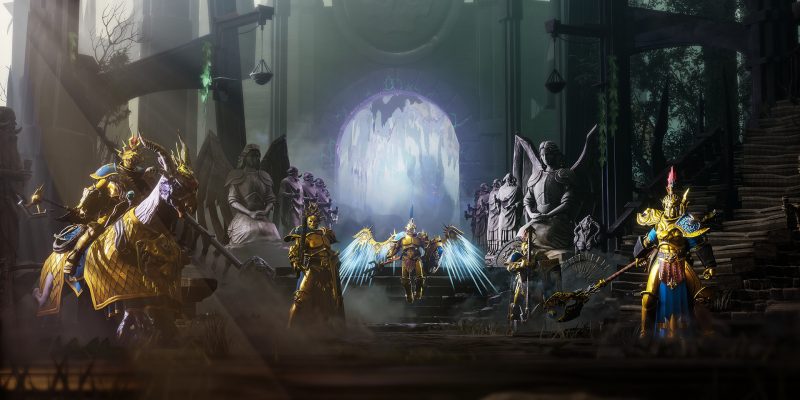 Back in 2015, loyal fans of Warhammer Fantasy Battles were surprised when a narrative event known as The End Times effectively destroyed the world. Then, it was reforged anew in a continuation of sorts with Age of Sigmar. The new tabletop wargame took characters and factions from the fantasy setting and turned them into gods and immortal warriors, each inhabiting their own realm. Six years later, we now have Warhammer Age of Sigmar: Storm Ground, touted as the first strategy video game adaptation of the license. The question still remains: is it worth it?

After a few hours of playing, even making our beginner’s guide and tips for the game, I can say that Warhammer Age of Sigmar: Storm Ground does have a particularly unique charm, one that slightly captures the essence of the tabletop’s lore and universe. Unfortunately, it’s also bogged down by a pointless difficulty curve, mishandled roguelike elements, and endless tedium.

Meet the factions in Warhammer Age of Sigmar: Storm Ground

Warhammer Age of Sigmar: Storm Ground lets you play as three factions: the Stormcast Eternals, the Nighthaunt, and the Maggotkin of Nurgle. To be clear, the tabletop itself has dozens of armies and four grand alliances (mega factions), but these are the only ones that are available in the game. The Stormcast Eternals (Order) were once mortal warriors who were imbued with immortality and the power of Sigmar. Meanwhile, the Nighthaunt (Death) are servants of Nagash, comprised of wraith-like beings and malevolent spirits. Lastly, the diseased Maggotkin (Chaos) follow the whims of the Chaos God Nurgle. They are the harbingers of plague and entropy.

The single-player campaign has you choosing the Stormcast Eternals mandatorily at the start, only allowing you to unlock the other two factions after you’ve finished a couple of missions. Worse, you’re only allowed one autosave all throughout. You’re unable to switch to a different faction until your current campaign is finished or you’ve completely failed.

It goes without saying that this is an obvious mistake. In a number of strategy games, having multiple factions means that players have the freedom to play whatever they’d want, anytime they’d want. Here, though, you’re locked into playing as a particular faction and you’d have to see how far you can progress before you can try others. 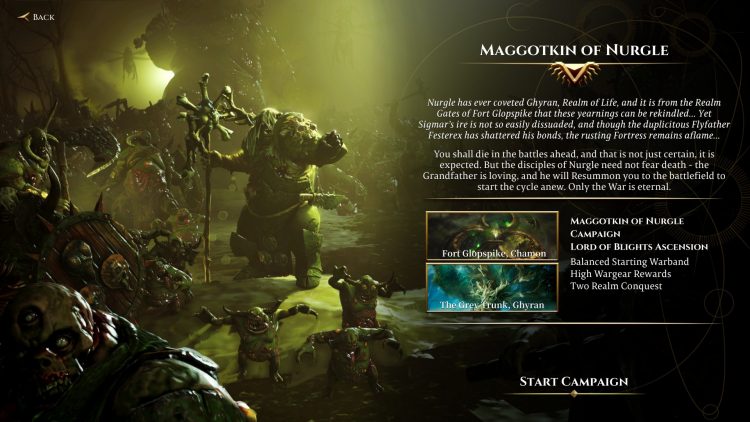 Roguelike elements and the difficulty curve

Speaking of how far you can get, Warhammer Age of Sigmar: Storm Ground emphasizes turn-based battles with roguelike elements. The units of each army take turns attacking or casting spells, and you may use points to summon additional forces. The loot and skills you’ve acquired can also be equipped on your heroes and troops. There’s enough variation here such as the Stormcast Eternals summoning allies close to where the hero is, the Nighthaunt requiring Skull Pyres or Wisps, and the Maggotkin spreading corruption

In your army, the units, gear, and skills are represented by cards. However, if a unit dies, it’s gone for good unless you can use a Miracle point to revive them. Likewise, the death of a main/important hero, the deaths of all units, and failure to complete an objective in time would lead to game overs as well. Since you only have one autosave, a single mistake can be very punishing indeed. This failure leads you to restart the campaign from scratch, though you do get to bring along certain units or wargear pieces that you’ve already acquired. For the most part, each run gets progressively easier until you finally triumph. 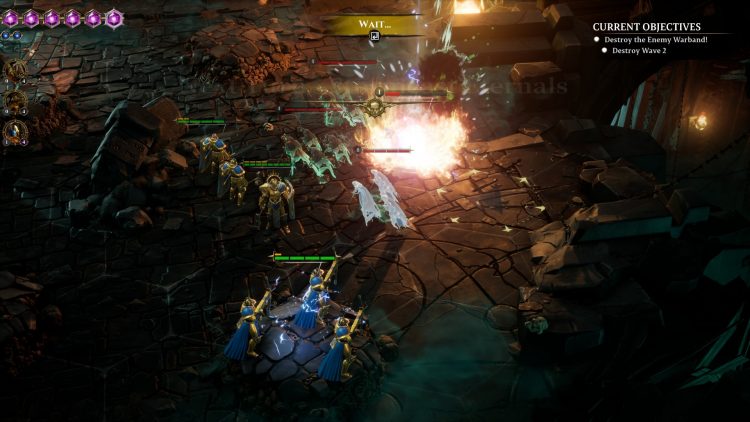 To be fair, I’ve completed the default difficulty of the Stormcast Eternals’ and Maggotkin’s campaigns (I’m actually halfway through finishing the latter’s campaign on the next difficulty mode). I’ve only had to restart twice, but it was truly a slog.

Progression is also hampered by weird difficulty spikes. For instance, the Stormcast Eternals campaign, as mentioned, serves as a tutorial. Then, roughly a few missions in, you’ll face off against half a dozen foes and their reinforcements, all while trying to hold capture points for a couple of turns. At that point in time, I only had three units unlocked. It made me wonder if the campaign was designed to make you fail as opposed to being one that challenges you to succeed. 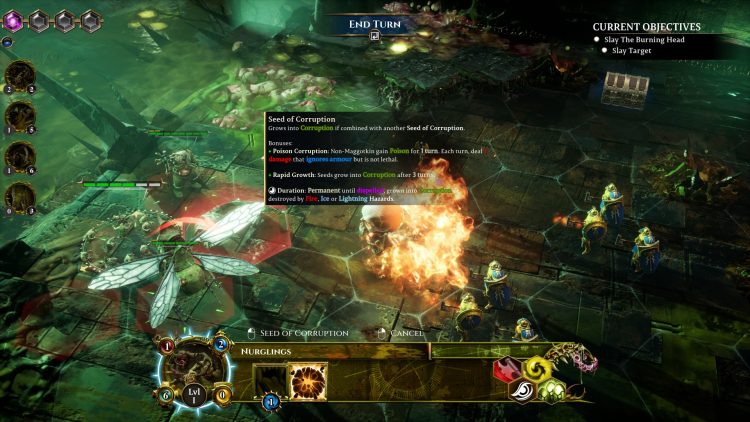 The tedium of progression

I do enjoy challenging games (i.e., roguelikes and Souls-likes). However, these titles tend to have a purpose behind the difficulty itself. In some cases, the player has to be skillful in dodging or parrying a boss’ attacks. In others, you might need a bit of luck to get a perfect run from start to finish. Sadly, Warhammer Age of Sigmar: Storm Ground‘s answer to these facets is to plop down a large number of enemy units, saddle you with limited reinforcements/unit slots, and force you to play more defensively (i.e., taking the high ground or waiting for enemies to wade straight into channeled blasts on hexes). It has led to several moments when I was simply winning by attrition, as opposed to emphasizing tactical depth or player agency.

Moreover, two factors also made for endless tedium. The first is due to the game’s slow animations which led to unexciting and plodding battles. The second is the lack of an engaging narrative. While it’s true that there are cutscenes and dialogue sequences, as well as new hero units you can meet and unlock, you can’t really relate to any of these characters or factions unless you’re a huge fan of the tabletop. It becomes a rather dull affair, as simple as “our forces will invade/fight off the invaders.” 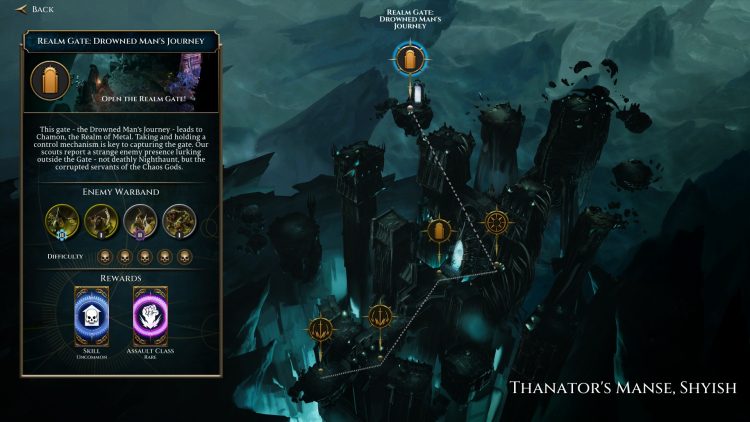 Completing any faction’s default campaign takes roughly six battles or so (unless you fail and need to restart). Then, a new difficulty mode is unlocked, one with more battles, tougher enemies, and rewards that aren’t readily seen. Worse, you only get to bring a couple of units from your “collection” of sorts. Everyone else that you’ve leveled up takes a backseat until you start a new chapter so you can select from your pool. It makes you wonder why you need to continue further. Then again, I’m only talking about the single-player mode here. The multiplayer mode, which I don’t usually play in turn-based strategy games, wasn’t something that I was able to try either.

Overall, I would consider Warhammer Age of Sigmar: Storm Ground as something that even the most die-hard tabletop fan would have trouble enjoying. While it’s true that it has a unique charm when it comes to units and heroes, its core mechanics and progression leave a lot to be desired. Similarly, if you’re looking for turn-based strategy games, you have a plethora of options such as the XCOM titles, Gears Tactics, Battle Brothers, and the like. If you want a video game adaptation of the Warhammer license (not specifically Age of Sigmar), then the Total War, Vermintide, Mechanicus, and Dawn of War games are still around. Lastly, if you’re keen on one that combines turn-based strategy and roguelike elements, even if it’s not about Warhammer, then you’re better off playing Othercide. 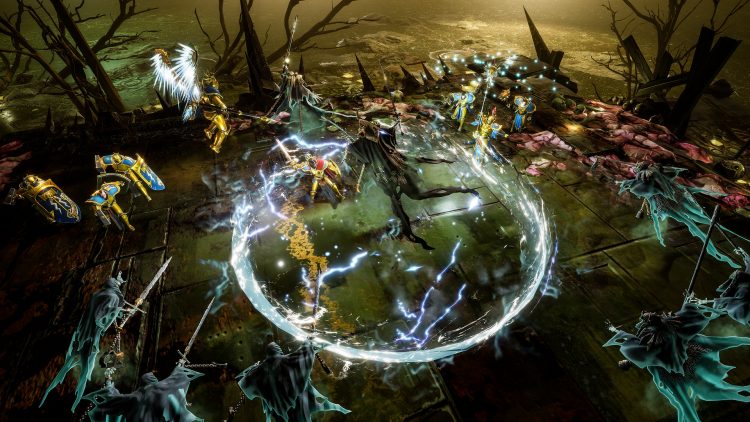 The Magnificent Trufflepigs review — Once you dig in

Hokko Life Early Access preview — Is it worth it?