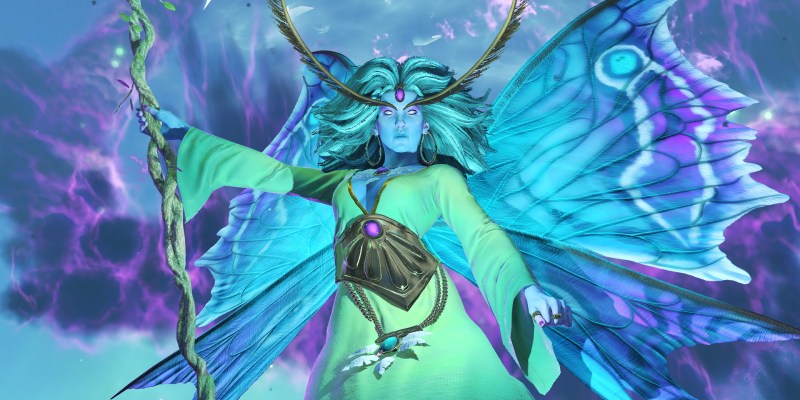 Awakening Ariel by healing the magical forest of the Witchwood is a key objective for the Sisters of Twilight in Total War: Warhammer II. This process is actually part of the Wood Elves rework and its many tweaks and changes.

Once you start your Total War: Warhammer II campaign as the Sisters of Twilight, you’re told that you can obtain the demi-goddess Ariel as a legendary hero. To do this, you’ll have to heal the nearby magical forest, the Witchwood, until it has 100 health.

That’s easier said than done because the process is a bit more complicated and, as cited in our feature article, it can be quite tedious, too. 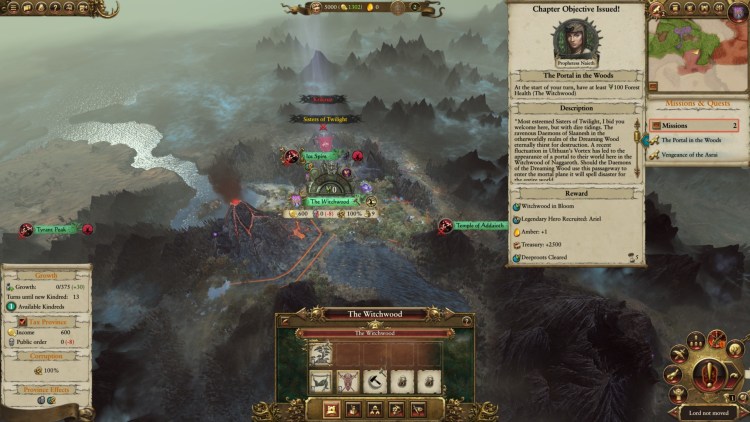 First, take a look at the Witchwood. This is a province with only one settlement that has 10 building slots. Likewise, you’ll notice that the magical forest confers boons once it reaches certain health thresholds.

Many of these effects actually apply to your entire faction, so it’s a somewhat passive means of obtaining powerful buffs. 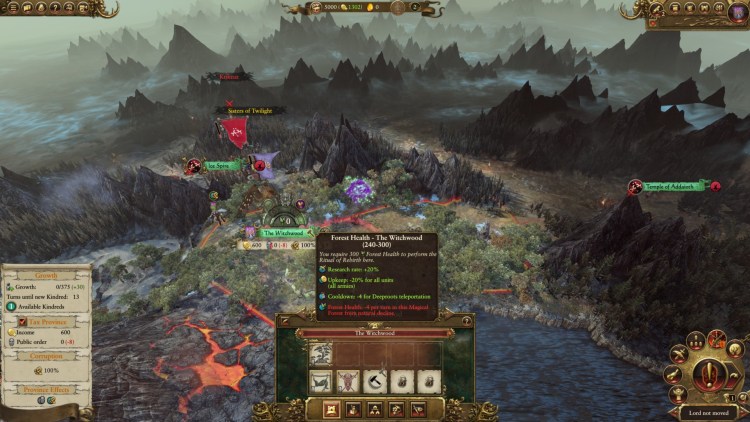 Next, take out the Broken Chainz army and invade the nearby settlement.

Battles within the boundaries of magical forests or heathlands provide extra health. You’ll also see this when you capture or raze heathlands. 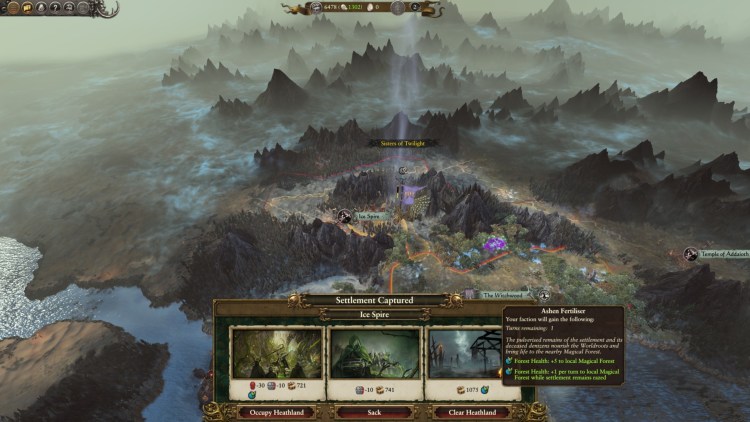 What exactly are heathlands?

Heathlands are basically settlements that are adjacent to the magical forest and they have a light green nameplate. In the case of the Witchwood, you’ve got the following:

Since we control one heathland and two others are owned by a faction we’re at war with, there’s a penalty to the Witchwood’s health. That means we need to capture or raze heathlands eventually.

Note: For factions that you’re not at war with, you gain zero health if they’re neutral and +1 health for each heathland they own if they’re allied with you. 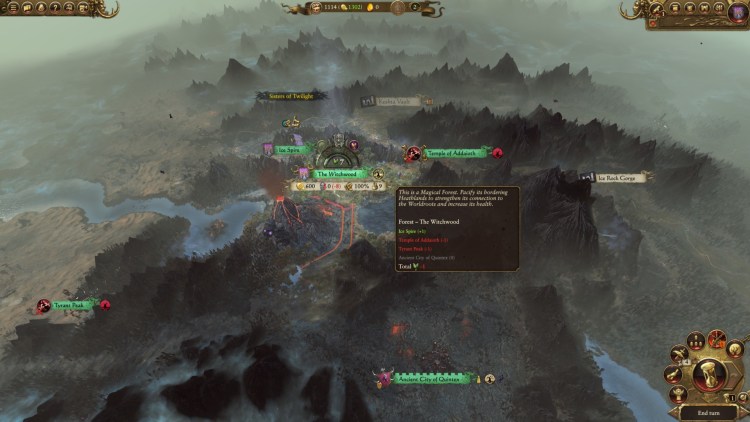 I find that getting worthwhile allies can be iffy in Total War: Warhammer II‘s Vortex campaign, especially at higher difficulties. Although factions can act as buffers, trying to befriend them can be tough (I’ve only managed to be pals with Settra and Khatep, and neither of them owns heathland settlements). Furthermore, if they get confederated, you lose the benefits if you’re not allied with the faction that gobbled them up.

Anyway, Total War: Warhammer II‘s Vortex campaign has four magical forests and each one has several heathlands. I’ve mentioned the Witchwood already, but the others are the Gaean Vale (Ulthuan), The Sacred Pools (Lustria), and Oreon’s Camp (Southlands). Here’s how things look like in Oreon’s Camp: 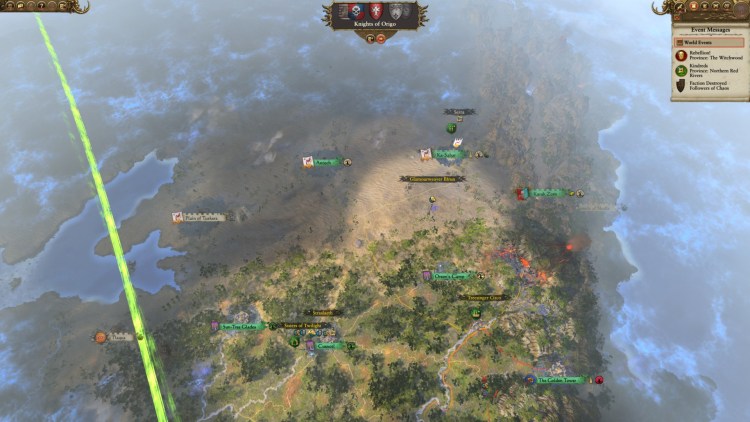 Obviously, trying to reach 100 forest health can be a tedious waiting game due to incremental gains. But, there’s also the Forest Encounters mechanic to consider.

From time to time, you’re prompted by a notification telling you that an invasion is amassing. Think of this as akin to an “Encounter at Sea.” There are moments when you could quickly move to that location and ambush a force before it finishes mustering. 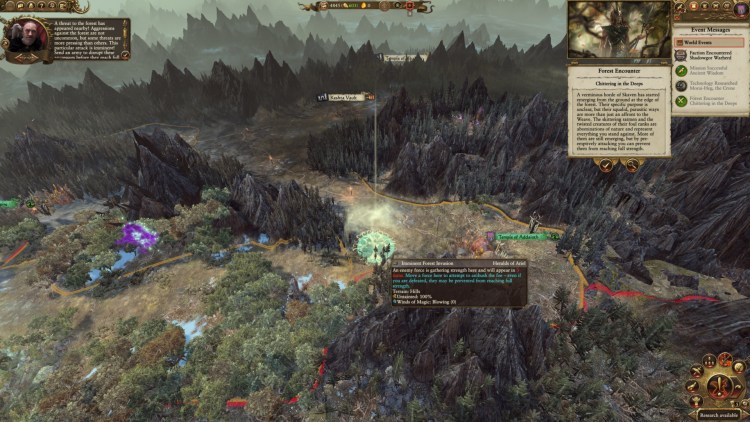 Then, there are times when you’re presented with a dilemma. In some cases, these dilemmas confer a penalty but make the ordeal easier. In others, you might battle a weaker army or a stronger one. 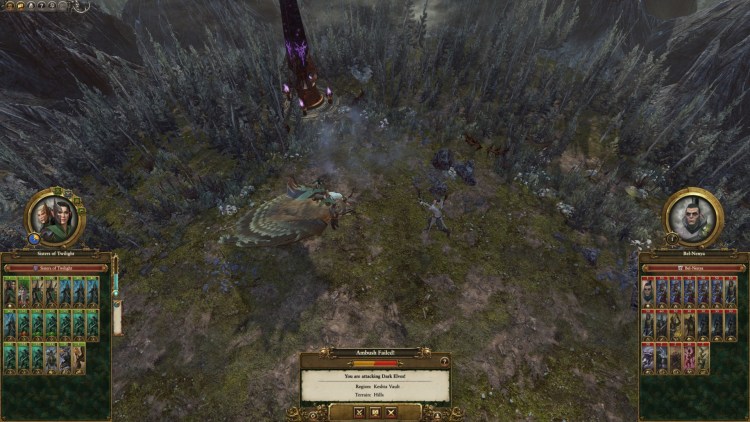 You can visit the other magical forests in Total War: Warhammer II‘s campaign map using the Deeproots system. There are also some quests here that heal the Witchwood (as well as the magical forest in that zone). Likewise, as far as I know, the Forest Encounter when you reach Oreon’s Camp actually presents a dilemma that lets you confederate with that faction immediately.

Note: At higher thresholds, the Witchwood’s HP decays over time, so you really need the heals from other forests. Anyway, we’ll talk more about this mechanic in our Wood Elves rework guide. 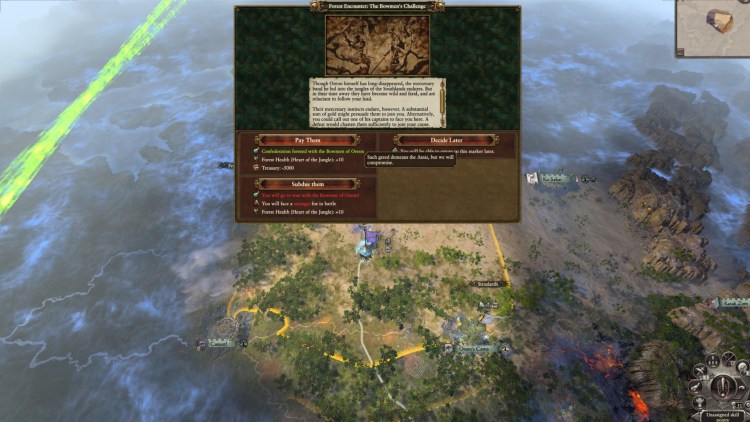 You can expect to reach turn 30 before Ariel gets unlocked. This depends on whether you’ve gone to war against Morathi to conquer/raze the Ancient City of Quintex, as well as how fast you took out the last Broken Chainz settlement.

Once the Witchwood has 100 health, Ariel will automatically spawn next to the Sisters of Twilight. 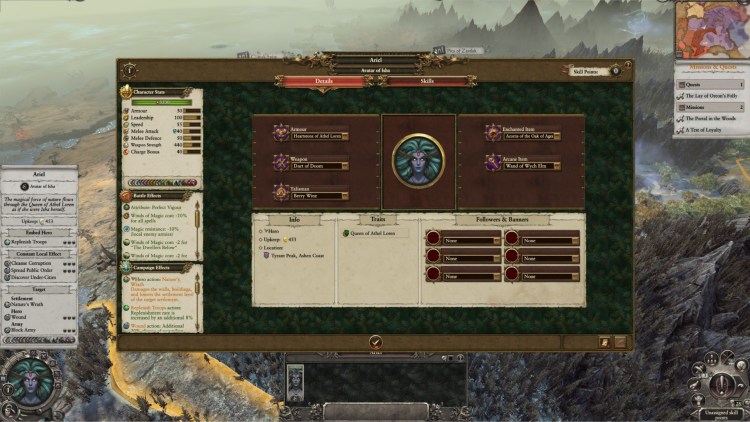 Ariel’s a legendary hero and she’s extremely formidable. She’s fully decked out in unique/purple gear and many of her skills upgrade her magic spells and abilities. These include:

She’s also got some amazing perks that apply to her in battle or those with campaign map effects: 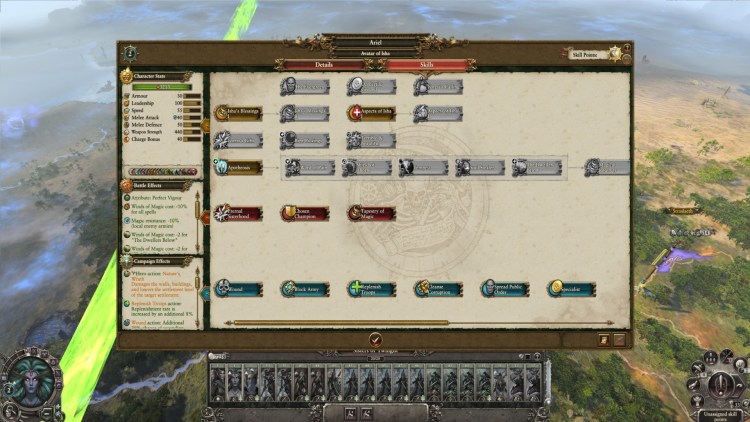 Use Ariel as much as possible to level her up and obtain her skills. She’s an absolute powerhouse and more than a match for any legendary lord.

In any case, reaching 100 Witchwood health isn’t the end because you still need to complete the Ritual of Rebirth (which also happens to be the mechanic that unlocks Ariel for the Mortal Empires campaign if that’s what you’re playing). Let’s go and discuss the rest of the Wood Elves rework. 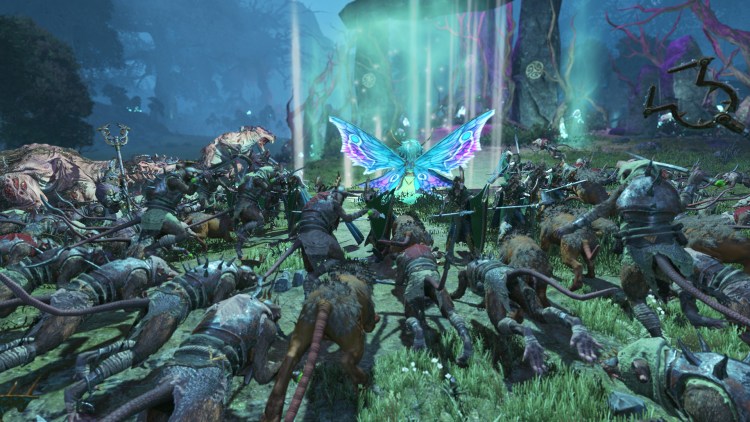 Can you play solos in Warzone 2? – Answered