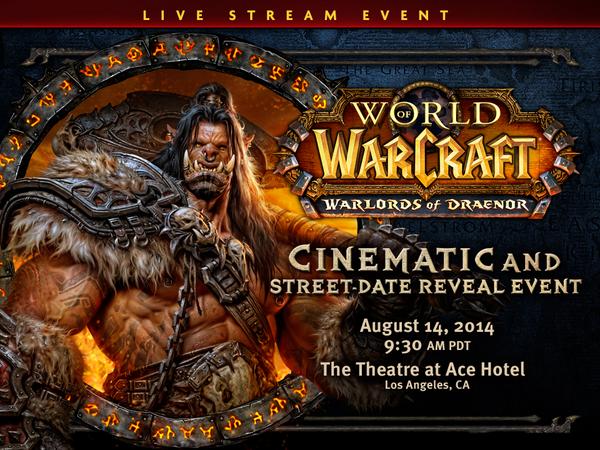 With World of Warcraft players already taking part in the beta there’s not much else to reveal.

Gamescom is just around the corners and Blizzard have little to show but there will be a reveal at least, the World of Warcraft: Warlords of Draenor cinematic. Blizzard will also be announcing the release date at the event although we do know already that it will be arriving this December.

If you’re not in Cologne then you can attend the Los Angeles reveal event which takes place at the Ace Hotel. Mike Morhaime, Chris Metzen, and World of Warcraft designers Ion Hazzikostas and Brian Holinka will be on hand where they will also be the debut the first episode of a new animated lore mini-series: Lords of War.

When: Thursday, August 14 at 9:30 a.m. PDT
Where: Join us on WorldofWarcraft.com to watch the live stream, or attend** the event live at the Theatre at Ace Hotel, located at 929 South Broadway in Los Angeles. (Doors open at 8:30 a.m.)

Live Attendee Bonus: Anyone who joins us live and in person in L.A. will also receive a beta key for Warlords of Draenor.*

At least the cinematic will be worth a watch, the Blizzard cinematics team always come up with goods.

The Sims 4 will have mod support at launch