WARNO is Wargame: Red Dragon with Steel Division mechanics and more, but that doesn’t mean it’s good. Like the previous Wargame series entries, WARNO is a Cold War real-time strategy (RTS) game, albeit much more limited in scope. This time, it’s set strictly in 1989 — literally the worst occasion to set a Cold War game. The technological balance has swung overwhelmingly to NATO’s benefit, while Warsaw Pact’s preemptive invasion stance shifted to a much more passive defensive posture. However, the kids want Apaches, Bradleys, and 120mm M1A1s, so that’s what they’re getting.

The gameplay in WARNO is the same as it was in Wargame. You build your deck, get to the field, spawn whichever units you can afford, wait for the ticker to award you more units, and so on. Units can carry up to three weapons each, vehicles still have directional armor, infantry still uses men as HP, and both can still be healed by supply trucks. Command units exist and, going by the manual, they actually boost surrounding unit veterancy by one level while also acting as the territory-grabbing units of old.

That doesn’t matter much in the Early Access version, because you only get the most barebones access to the Skirmish mode (multiplayer and PvP) and the Armory. In the Armory, you can build forces based on either the 3rd Armored Division or the 79th Guards Tank Division, just like in Steel Division. Only, you know, there’s not much choice when you have one division per faction.

There are no Steel Division battle phases, so you just build your deck as usual. You have your activation points (50) and categories (tanks, infantry, etc.). The type of division determines how many slots per category you get, and how much they cost. Seeing how both of the available divisions are armored, don’t expect to conduct infantry rushes. However, there are a couple of nice features here. You have plenty of filter options, and you can choose (albeit not entirely freely) what transport certain infantry units can take. 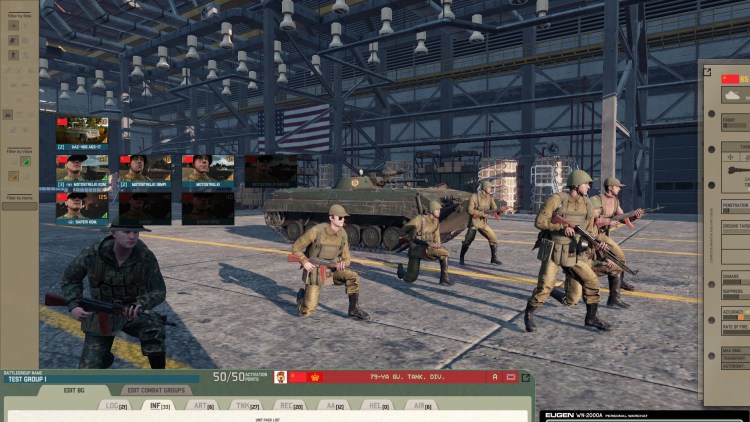 Western Group of Forces has relaxed uniform regulations to the point where you can wear your best Afghanistan gear.

A weird thing in WARNO, though, revolves around companies and platoons. Normally, Wargame allows you to call in individual units, so you can feed your forces piecemeal into the grinder as much as you want. But here, platoons — made up of three slots, up to 4 copies of units per — are these pre-packaged groups that you can call in at once. Notably, once a unit is placed into a platoon, it’s removed from your regular pool. So, if you have 12 M1A1(HA) total, and 4 of them are in a platoon, you can only freely call in 8.

Sarge, the new system is FUBAR!

The feasibility of such groupings is questionable with regards to point costs, though. An M1A1(HA) platoon is around 1,000 points. However, platoons tie into another new system: group commands.

Now, just like any other modern RTS, Wargame is very dependent on micro, and the one who can baby their units the best will win. WARNO tries to lessen that load by allowing you to give control-group units — you know, the thing you make when you CTRL+1 a bunch of selected units — over to AI command. You tell such a group to seize an area, and they’ll try to do it, switching to a defensive posture if they survive. What’s better is that you can even reinforce these damaged formations at the press of a button (as long as you have the points and copies remaining). 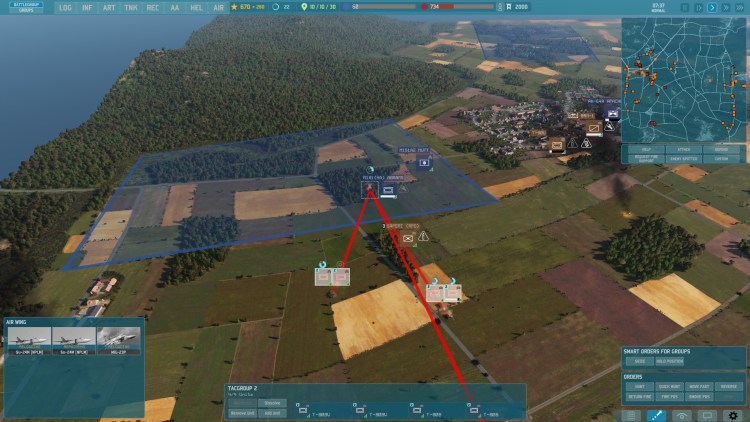 If you look at the bottom of the screen, you can see a TACGROUP of T-80s. I can’t select any of them individually anymore.

There’s also an added fun feature that WARNO takes from Armored Brigade: you can set, both for individual units on the field and in settings, Rules of Engagement (ROE). Will a unit waste anti-tank guided missiles (ATGM) on unarmed transports? Will it take the shortest route, the quickest route, or a more covered route? How will it act once attacked? If only we could set ROE templates and just paste them on any unit we pleased in the deck-building phase.

But, back to the main issue with the AI: it doesn’t really work in practice. Groups with anti-air components will leave PC-controlled groups behind, and trying to select an individual member of such a unit is nearly impossible. There isn’t really anything stopping transports from leaving once the dismounts, er, dismount. So, it’s a good and welcome feature in theory, but the implementation depends on both the AI and your ability to program it. As of right now, it doesn’t really work. 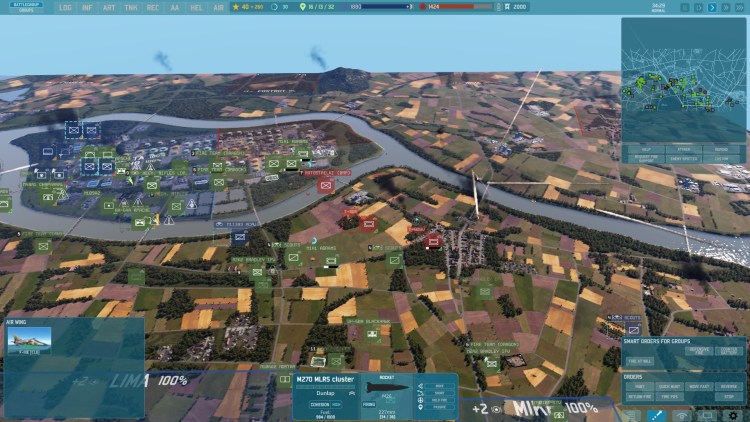 With all this nonsense happening on the screen, I don’t have time to baby anything.

That’s just WARNO at present. Closer to an open beta than an Early Access title, it suffers from all sorts of jank, missing features (oh tutorial, where art thou?), and glaring balance issues. Helicopters can, for example, waltz right up to an AA vehicle and destroy it with rockets. You have to micro said AA vehicles to get within their pitiful range and abominable line of sight to fight back. Meanwhile, the US is calling in Hellfire-armed Kiowas (a scout version of Bell 206, which you’ve seen crash in every movie made before 2002) to snipe tanks at extreme range.

Calling in dedicated anti-air jets doesn’t help much, because they fire at helicopters at dueling-pistol range if they can fire at them at all. And while dogfights in the air look beautiful, that’s the only part that works. You’d think an F-111 dropping eight cluster bombs would do more than trash some UAZ-469s (which, for some reason, have five health points per compared to 10 on the US M151), but cluster ammo doesn’t seem to do much at all, no matter the platform. In fact, gun artillery is preferable. Except that gun artillery firing looks like a cartoon-y mess, and so does the rest of ground-based fire. Here’s an example of cluster munition effectiveness that also shows off the terrible interface design decisions.

I want to bring up Warhammer 40,000, because Eugen, with three Wargames under its belt, decided to model Bradleys with firing ports straight from Chimera. This is an intriguing error to make considering the team has so much experience. The confusing title of the game (which stands for “warning order”), means an alert that an operational order (OPORD) is coming. This is meant to show that they’re huge war nerds, and yet the game still has this nonsense.

At this point of development, WARNO is absolutely not worth your money. Two armies, a handful of maps, and a mountain of jank isn’t worth $40 USD. The game isn’t any healthier than the Crossfire Legion version I previewed — and that was a closed playtest build you can’t yet buy. My advice for new players is to wait, and for existing players to keep their skills sharp in Wargame and Steel Division. It’s basically the same game.