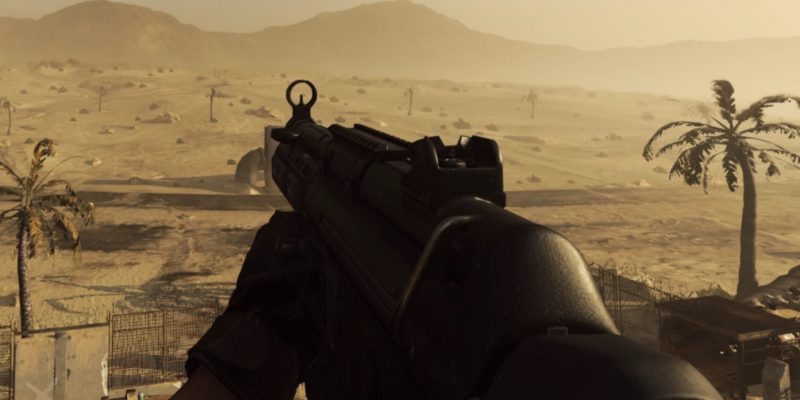 It doesn’t seem to matter what year it is. The MP5 never fails to be strong. From way back in the original Modern Warfare up to Treyarch’s latest Black Ops Cold War, it has always excelled. It should come as no surprise that the MP5 is among the best submachine guns to build in Warzone.

This build focuses on the Modern Warfare MP5, but the newer Black Ops Cold War version is good in its own right. If you’re interested in finding out how to build that version too, be sure to check out our guide on it. But if you want my honest opinion, the Modern Warfare MP5 is a slightly better all-around weapon.

The MP5’s biggest strength is its lack of weaknesses. There isn’t an obvious category that the MP5 struggles to compete in. It has an above-average effective range by submachine gun standards and a solid time to kill. Couple that with its highly practical iron sights and impressive handling characteristics, and you’re left with a fantastic weapon.

Therefore the best MP5 build for Warzone is one that maintains that well-rounded status. Trying to make the MP5 a specialist SMG is a bad idea, as there will always be a competitor that does that one job better. The Fennec can kill faster, the Bullfrog has a larger magazine, and the MP7 outranges it. But none of those guns perform well in all three categories, unlike the MP5. This is the reason it has excelled in Activision’s hit battle royale for so long. 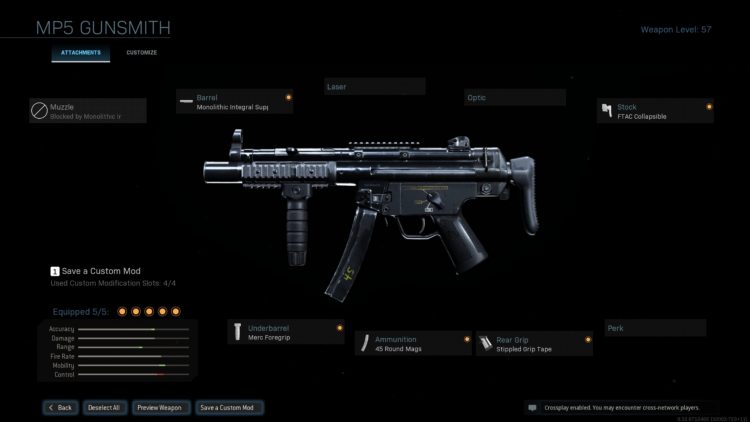 To help improve mid-range performance, start off by equipping the Monolithic Integral Suppressor. This is one of the best attachments available in Warzone. It acts as both a Monolithic Suppressor and extended barrel, but only occupies a single attachment slot. Using this gives a nice bullet velocity boost and damage range increase. Furthermore, it makes your gunfire quieter, making it less likely you’ll get third-partied by any nearby teams.

However, the Monolithic Integral Suppressor comes with a slight aim down sights time penalty. Although it isn’t too big of a con, you will still want to make sure that this Warzone MP5 build feels like a submachine gun. To avoid making it too heavy, use both the FTAC Collapsible stock and Stippled Grip Tape. These both improve ADS speed provide a notable improvement to movement speed. This will let you move around Verdansk faster without resorting to using vehicles and giving your location away. 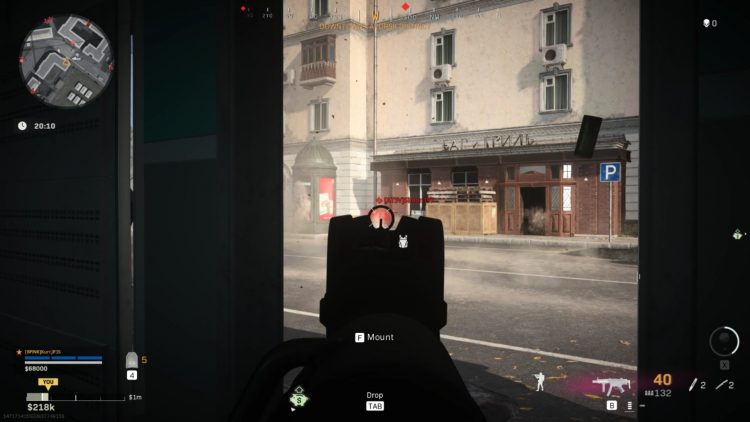 Unfortunately, the MP5 isn’t able to take advantage of the larger magazines available on many other SMGs. It is instead capped at a 45 Round Mag, but this is usually enough to get the job done. The MP5’s reload time is fast enough that you can simply back off, reload, and re-engage in between magazines. As an added note, you can switch out the Stippled Grip Tape for the Sleight of Hand weapon perk if you find this problematic. Sleight of Hand speeds up the MP5’s reload time and is an okay choice for players who prefer to play aggressively.

The Merc Foregrip is a must-have for just about any MP5 Warzone build. At a slight cost to mobility, it provides a huge decrease to vertical recoil and it improves hip-fire accuracy. Given that the FTAC Collapsible stock increases recoil significantly, the Merc Foregrip is a good way to offset it. If you are having issues controlling the recoil on this build, consider switching out the Collapsible Stock for the Tac Laser instead.

How to claim the Apex Legends Prime Gaming skin for Octane

By Logan Broadley4 hours ago
Guides