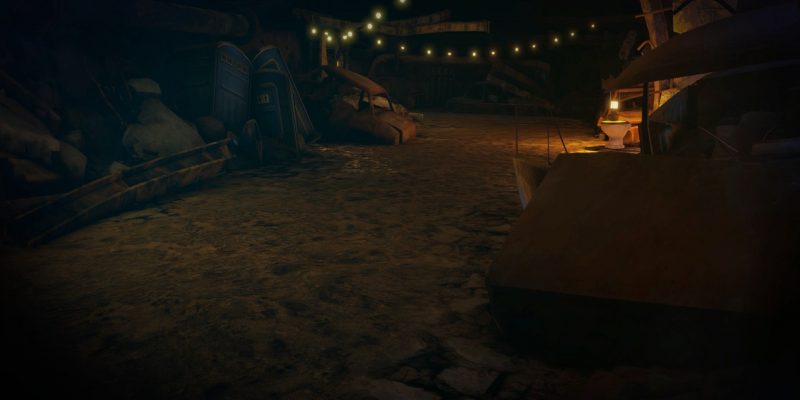 Solving the Scrapyard puzzle reveals the entrance to the Ghost Garage where you’ll meet Blue and the Ghost Gang. The area is littered with traps, so you’ll want Sneaky Shit and Explosives to disarm them. The main entrance also leads to a firefight, but you can use hidden and side paths to avoid all hostile encounters. Here’s our Ghost Garage walkthrough and guide for Wasteland 3: The Battle of Steeltown.

Note: For more information about Wasteland 3: The Battle of Steeltown and the base game, check out our guides/features hub and expansion walkthrough. Likewise, please remember that this guide contains minor spoilers.

Open the door to your left (Lockpicking 6) to find a chest with 4x Tellurium and a Disruption Energy Converter crafting recipe.

There’s also another hidden door that you can go through. It leads to a cave system with some loot and a rather quaint-looking bathroom. 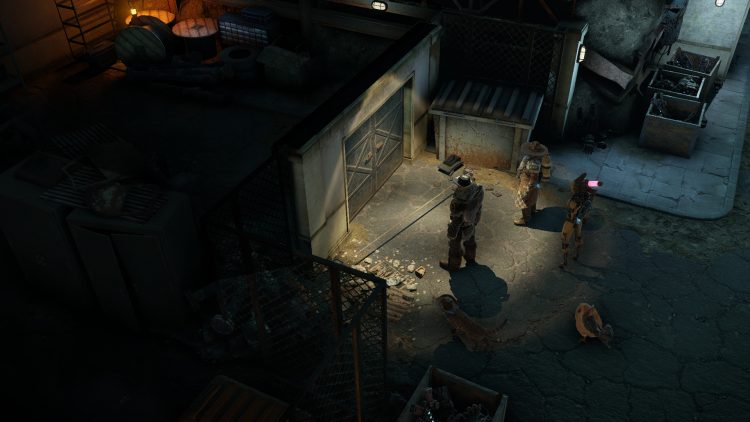 The chest (Lockpicking 9) in this room has 4x Tellurium, but the strange object here is Blue’s talking toilet called the Secret Head. Choose Kiss Ass 7 or Mechanics 7 so you can have a friendly chat with it.

Past this point, there’s a toaster (Toaster Repair 7) with 5x Tellurium and the Elite Ignition Spear blueprint. The door here leads to the main area where Blue and his cohorts are. I would advise you not to go through here just yet. 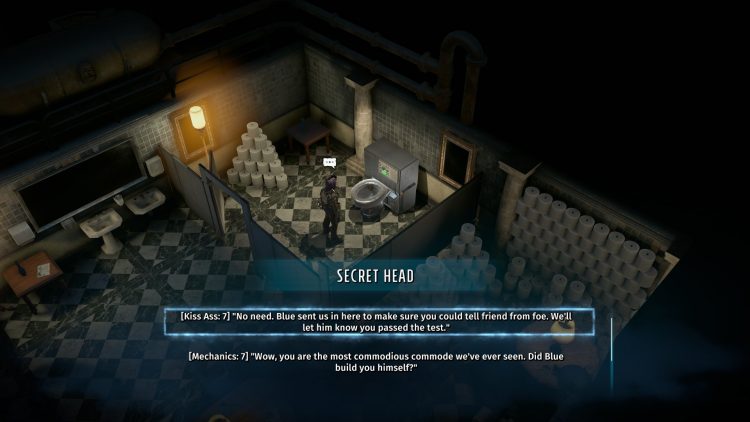 Instead, follow the hallway to the right (as you enter the Ghost Garage). There are several Ghost Gang members here, but you can sneak to avoid detection.

Use the terminal (Nerd Stuff 5) to disable the safety system of the Tesla Coil. Then, step on the plate to knock out the two gang members in the room. 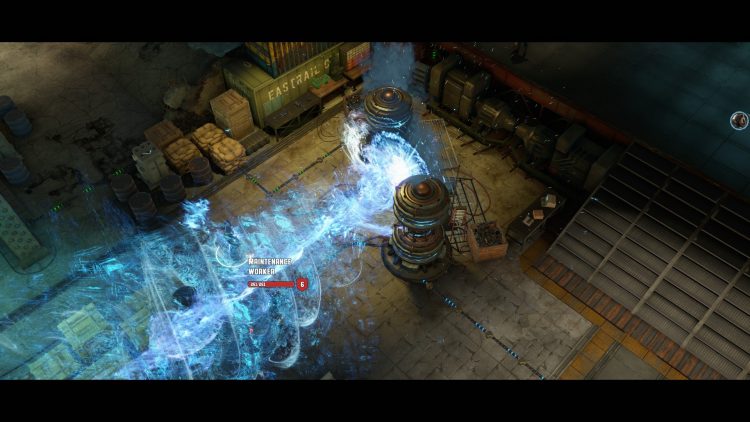 Go further up the rampway to spot another soldier named Rank Ravi. Sneak past him and enter the small room. Set the toaster on a 20-second timer so Ravi gets distracted. Get out, and use the terminal at the northeastern wall. If you use Nerd Stuff 6, it’ll reveal hidden commands. Once Rank Ravi is inside the room, execute the “Fuck Rank Ravi – Trapped in the Closet” command to lock him in. You can search the containers for some loot (i.e., Grounded Exo Suit/Helm), and interact with the other terminal to disable the turrets.

Note: The door of the small room doesn’t appear closed, though Ravi’s dialogue implies that he’s trapped inside. This is probably just a visual bug. 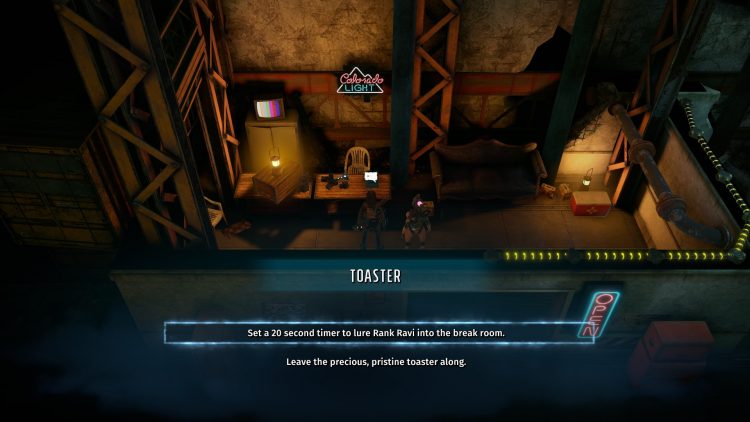 Meeting Blue, what to do with Di, and the Synaptic Degausser

Rather than rushing into the main area, you can use the intercom to talk to Blue. There are two attack options, including Hard Ass 6 which demoralizes your enemies. However, you can use Kiss Ass 5 to just have a talk. Blue tells you that he used to be Markham’s partner (or lover) until the two had a falling out. It seems that Markham was once a good person, but altruism gave way to cold, hard pragmatism.

Likewise, Blue adds that Markham reprogrammed Di to be completely loyal to her, making the robot send out messages that Steeltown is a safe haven for synths. When the synths arrived, they were quickly hauled off by Markham to be trapped inside the Computation Engine that runs the place. You then have a few choices:

Note: If you believe Blue’s take on events, he’ll think about giving you the Synaptic Degausser, the device that Markham needs to reset the synths and the Computation Engine. Blue’s response will be based on the actions you’ve taken thus far, including thinking that synths are sentient beings, acknowledging Di’s consent, exposing Ludlow’s abuses, and preventing unnecessary loss of life. If your morals hold true, Blue will let you obtain the Synaptic Degausser. If you choose the other options, you can still enter the room to grab it anyway. 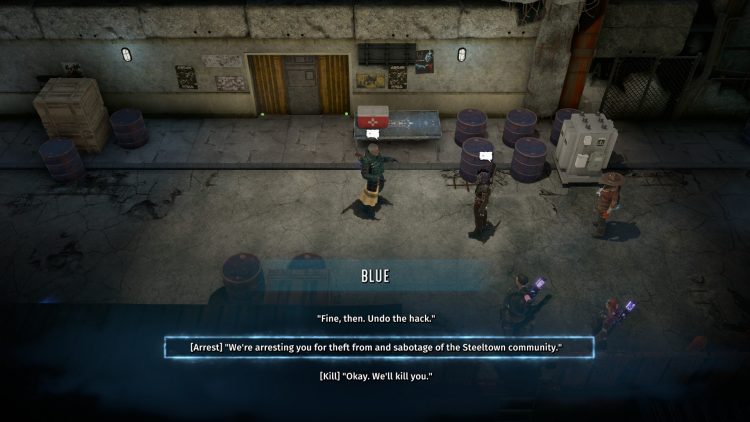 Whatever the case may be, check the room behind Blue:

Once that’s done, leave the area and make sure that you save prior to reaching Steeltown’s gateway. There’s going to be a fateful choice that we’ll discuss in the next part of our Wasteland 3: The Battle of Steeltown walkthrough and guide.

Note: A bit later after completing the next steps of the main quest for the DLC, you can revisit the Ghost Garage. There’s an easter egg battle here, too, which we’ll talk about in the epilogue section. 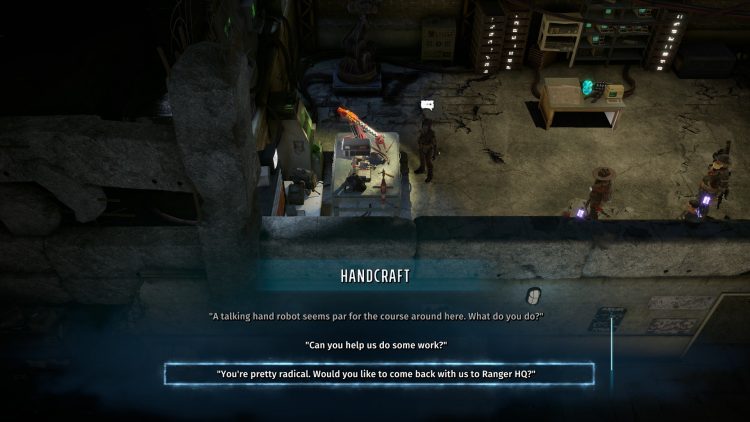 Wasteland 3: Battle of Steeltown guide — Confrontation: Choose a side