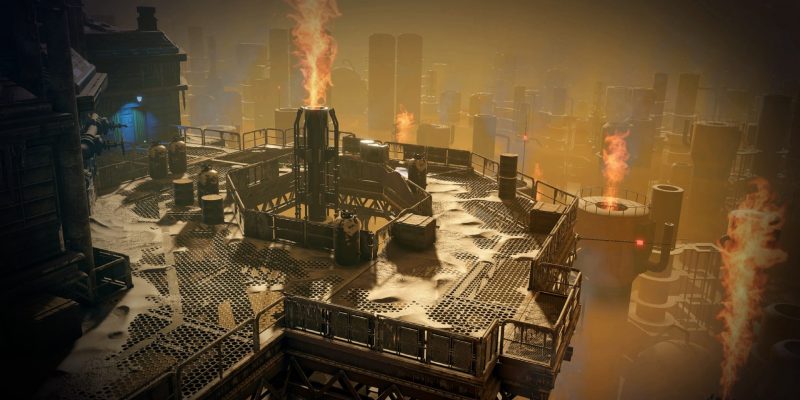 After deciding who to side with, one particular faction will wrest control of the facility. You’re then tasked to go to Steeltown Spire to use the Synaptic Degausser and reset the Computation Engine. Here’s our Steeltown Spire finale walkthrough and guide for Wasteland 3: The Battle of Steeltown leading up to its ending.

Note: For more information about Wasteland 3: The Battle of Steeltown and the base game, check out our guides/features hub and expansion walkthrough. Likewise, please remember that this guide contains spoilers.

The elevator to Steeltown Spire can be found right next to Markham’s spot. As soon as you reach this floor, walking a few paces will lead to a dialogue sequence. It appears that the Computation Engine, formed using imprisoned synths, wants to make a deal. You have an extremely important choice to make here: 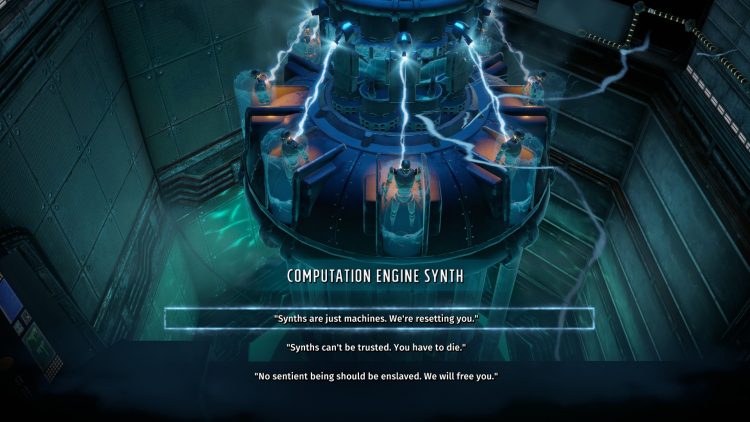 The encounters here follow a typical process. Naturally, you’ll need to destroy the security bots. However, more and more will spawn unless you deactivate the switches, turning the battles into brutal slogs. Make sure you have characters that can quickly run to those spots to interact with the panels. Otherwise, you’ll just get mauled since you’re outnumbered.

Since you’re fighting bots, you no longer need to use Disruption-type weapons. Just equip your best gear and take them all out. Oh, and make sure to open all the containers and grab all the loot (i.e., Cryo Armor). 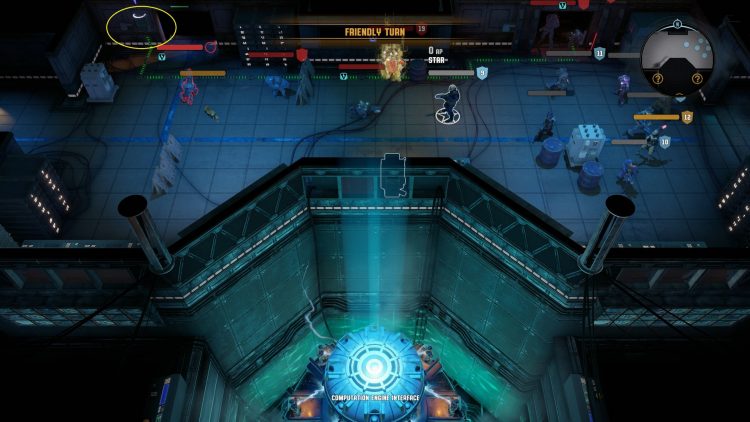 There are three encounters here, including the initial one at the elevator. After each encounter, notice that the doors are blocked (if you sided with the synths, they open the first doorway for you). You’ll need to go outside and cross via the walkways. Take care because there are dozens of traps and mines here.

The second walkway (just prior to the final area) has a toaster (Toaster Repair 7). It has the second Fraternization Clearance Form (for Luna Moon and Serena Ash). Unfortunately, as mentioned earlier, there doesn’t seem to be a change in Serena’s dialogue and Luna no longer appears in the Factory Level.

Note: There’s a scientist named Arushi, but I have no idea what this NPC does. 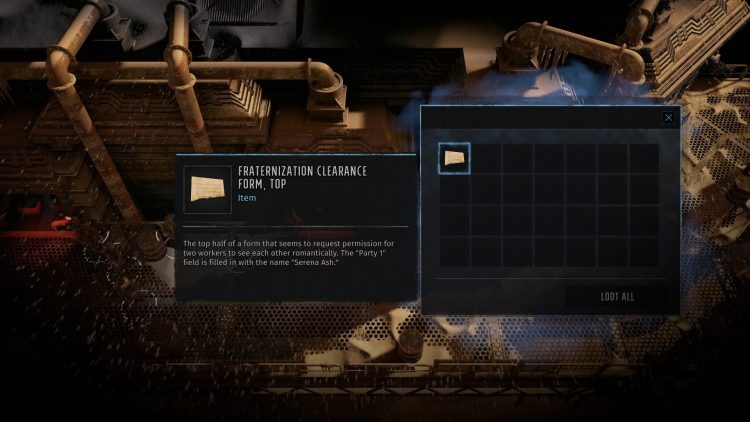 The Computation Engine Core and what to do with the synths

So, who exactly are these synths? Well, they’re survivors of Base Cochise, scattered all across the country at the end of Wasteland 2. Without a powerful AI to control them, the synths simply wished to survive and find a safe haven. They were lured to Steeltown thanks to Di’s broadcast after she was reprogrammed by Markham. Once they started arriving in droves, they were carted off and enslaved to power the Computation Engine. These synths have been causing malfunctions and confusion in the factory in an attempt to get people to notice that they’re trapped. Wouldn’t you know it, this disturbance also caused the Rangers to arrive.

Anyway, make sure you’ve clicked on the two buttons on the panels to disengage the failsafes. Then, you can interact with the Computation Engine Core. The game will present you with the “reset,” “kill,” or “free” choices again. 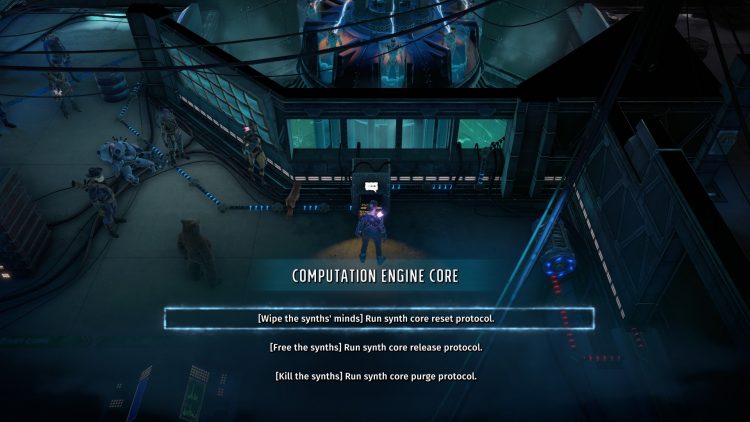 You can stick to the decision you made earlier, but you still have a chance to pick something else. Sadly, it won’t change what had transpired. For instance, if you chose to kill the synths during the elevator dialogue, then you had no other option but to kill Di as well since she becomes hostile. Deciding to reset the machine now won’t bring her back.

Note 1: It’s also possible to free the synths and talk to them. Then, during the dialogue, you can decide to attack and kill them all. You won’t get unique loot from their remains, though.

Note 2: I’ve been informed that the Machine Commune in Denver does get informed about your decision here, so you might encounter some tidbits of dialogue. 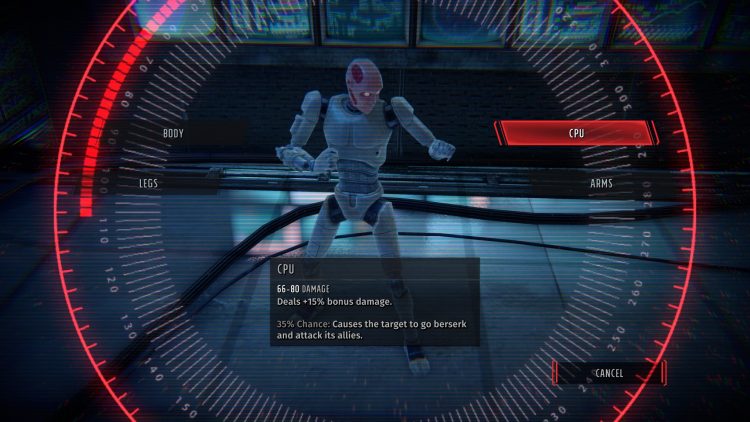 In any case, here are the results:

For the ending, the facility will either be better or worse off depending on the decisions you’ve made throughout the campaign of Wasteland 3: The Battle of Steeltown. After that, just leave the zone and go back to the world map. Report all your findings to the Patriarch. If you followed the Markham path (i.e., side with Markham -> reset the synths), you’ll receive more cash from the Patriarch.

In any case, it’s time to talk about the outcome of all your choices, culminating in this expansion’s epilogue. 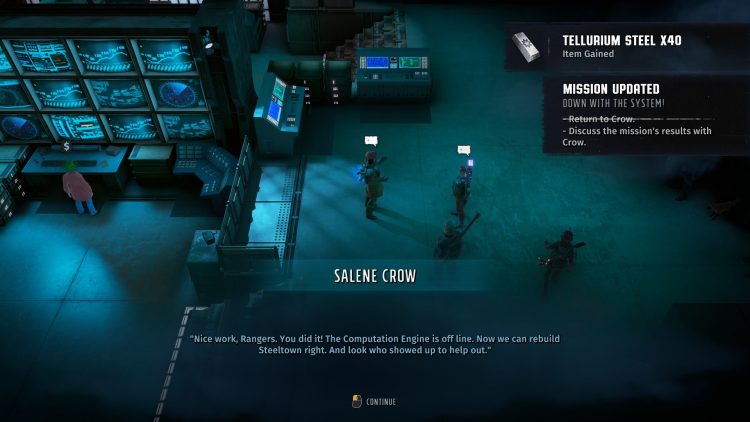 Wasteland 3: Battle of Steeltown guide — Confrontation: Choose a side

The Last Spell Early Access — Is it worth it?