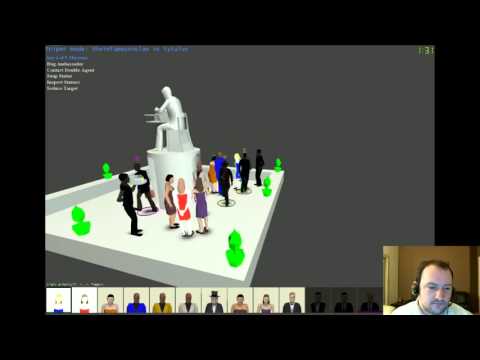 What is SpyParty? (Besides for being one of the most anticipated indie games for more than a year.)

From the developers themselves: “SpyParty is a spy game about human behavior, performance, perception, and deception. While most espionage games have you spend your time shooting stuff, blowing stuff up, and driving fast, SpyParty has you hide in plain sight, deceive your opponent, and detect subtle behavioral “tells” to achieve your objectives. Unlike the suave and confident spies you might find in films or books, most spies in spy games are more like super powered commandos–more Rambo than James Bond. By contrast, SpyParty is a new and quite different game about the more interesting and deeper aspects of being a spy.”
Now, before  you watch these videos, let me give a brief explanation as to the objective. There are many different modes, but I’ll explain this one. Basically, a scene plays out at a party, and most of the characters are NPCs. However, one of them is actually a player-controlled spy. Another player is the sniper and must try to figure out who in the room is the spy controlled by the other real human. Of course, the spy tries to act as natural as possible and not deceive his identity to the sniper. When the sniper thinks he has figured it out he must shoot the spy. If he guessed wrong, then it was actually a civilian he killed and the spy wins.
In the following two videos, you’ll see the same game being played out by both sides. The first is the sniper and the second is the spy.

Destructoid Hands Black Ops Declassified a 1.5 In Their Hilarious Review

Today Is A Great Day for PC Gaming – Planetside 2 Launches!