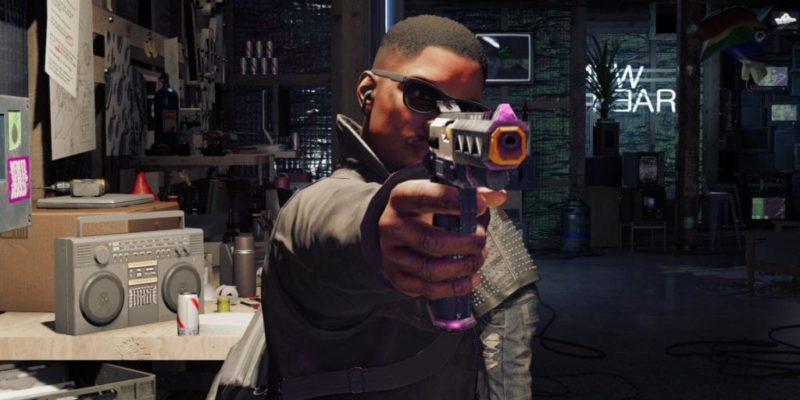 Thank you, Ubisoft. After Mafia 3 and Dishonored 2, Watch Dogs 2 has restored some of my faith in PC versions.

I will admit: I was mildly terrified. Putting aside the fact that the original Watch Dogs was disappointing on the cosmic scale, the documents included with the review code made it sound… more than a little demanding. There were mentions of 10-series GeForce cards, and a 20-page PDF detailing all the Nvidia whatsits included within. After Dishonored 2 turned out to be a game that limped rather than ran, I’m not going to lie: I spent 20 minutes of the download time weighing up the value of some very expensive video cards.

Fortunately, Watch Dogs 2 runs incredibly well. Not quite flawlessly unless I drop the graphics more than I really want to, but well enough that I don’t actually have any complaints.

As per usual, we’ll kick off with the options – and I’m very, very pleased with these. 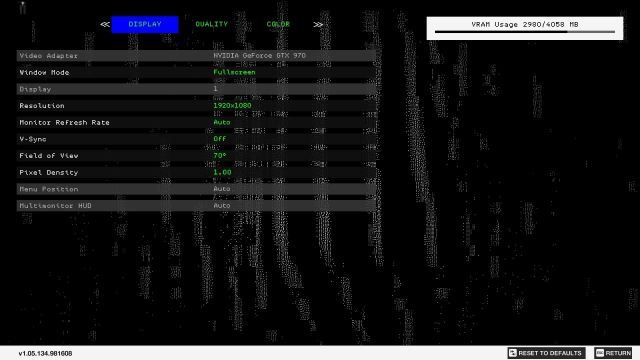 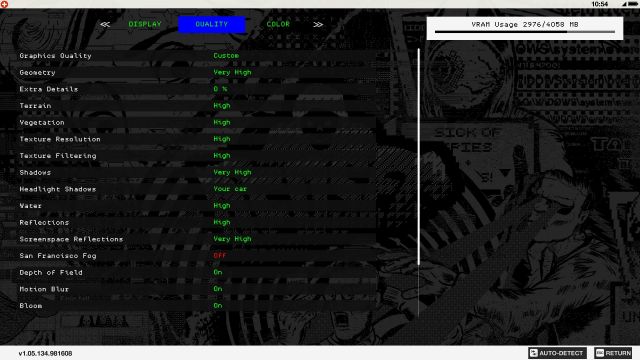 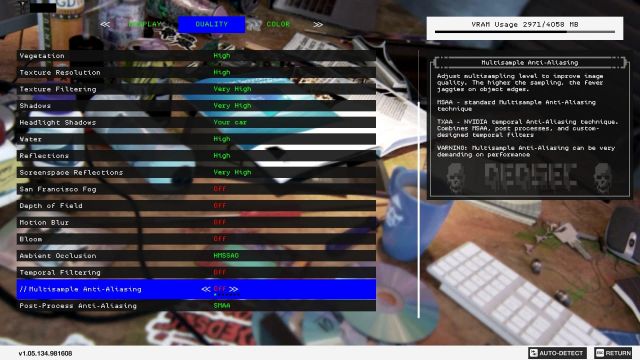 Excluding the fact that the animated main menu background can make the old-school ASCII settings a little hard to read in screenshot form, these basically offer most of what I could ask for. You’ve got everything from basic detail settings through to the specifics of ambient occlusion, post-process anti-aliasing, the ever-welcome Bloom/Depth of Field/Motion blur settings, and even a Field of View adjustment that goes from 70 degrees up to 110 degrees. I’m going to be honest and state that I haven’t actually toyed with that, because the FOV in third-person games rarely gets to me, but I’ll probably bump it up slightly before continued play.

Two other points of note are that there’s a VRAM indicator in the top-right, so you know how close you are to forcing your card to tap out, and that mousing over each of the options offers a (usually very detailed) description of exactly what they do. Water, for instance, tells me that on Low it disables reflections. Multi-sample anti-aliasing explains the difference between MSAA and TXAA, tells me what multi-sample anti-aliasing actually is, and warns me that it’s very demanding. Not only that, but it tells me specifically which options will require a restart to the main menu before I adjust them. More of this sort of thing, please. These are the options menus I like to see.

For what it’s worth, Watch Dogs 2 itself is around 25GB in size, with an additional 6GB “Ultra texture pack” as free DLC. I did not download this, because the Ultra texture pack is apparently aimed very much at top-of-the-range video cards, and selecting the Ultra preset in the visual settings sent it over my card’s VRAM. As someone whose hard drive is routinely full of rubbish, I’m quite pleased with the ability to not download an extra 6GB I’m simply not going to use.

This was rattling along at just under 60 FPS.

I’m told that auto-detection aims for 30 FPS at 1080p. I can happily report that it managed considerably better than this, for me.

The frame rate is a little iffy with the auto-detected settings (which were mostly a mix of High and Very High) but not by much, and I think that’s in part down to either excellent frame-pacing, or simply the fact that as a third-person action-y cover-y thing, Watch Dogs 2 doesn’t require too much in the way of instant twitch reflexes.

On the detected settings my i7-3820/16 GB RAM/GeForce GTX 970 was managing a comfortable 58-60 FPS, and while FRAPS told me it was dropping down to the high 40s on rare occasions, I can happily say I didn’t really notice it. Lowering the settings a little raised this further, capping me out at 60 most of the time with occasional drops to about 54 when things got really busy. And, thankfully, dropping the details to Low gave me a constant 60. 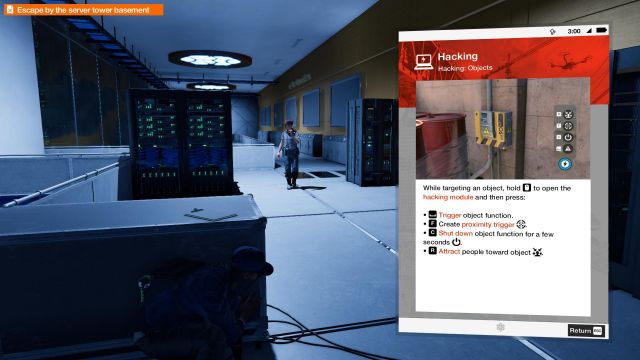 Yes, you can still actually hack things. I sort of forgot to mention that. It seems an awful lot more in-depth than the systems in the original Watch Dogs, too.

This is all early-game stuff, mind. When you’ve got a full wanted rating and there are police everywhere and explosions and gunfire and all sorts of PHYSICS happening, it’s entirely possible the framerate will plummet… but having sent a motorbike careening into the air, exploded a steam pipe under a police car, and smashed through a bunch of objects on the pavement, I’m not too worried about it suddenly crashing down to sub-30. And considering I’m on High/Very High, there’s quite a way I can go down if I really need to.

I’ll also note that this is a very Nvidia heavy game with a number of Nvidia-specific options, so I have no idea how it’ll run on AMD cards. Sorry, AMD users.

For comparison, here’s (roughly) the same scene on both Low and Very High. 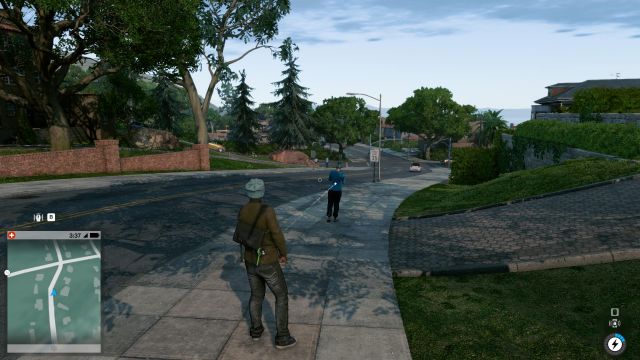 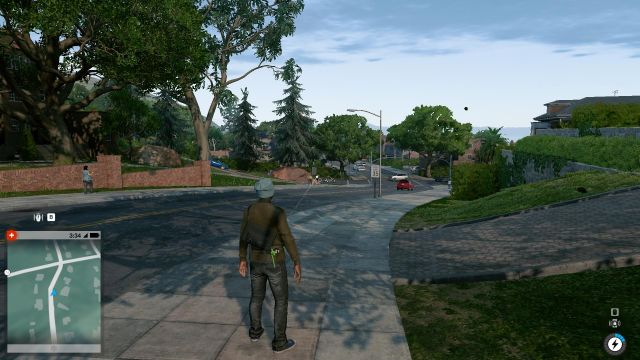 There are two things I want to poke at. The first is the foliage shadows, which (early on at least) are pretty much omnipresent as virtual San Francisco apparently features a lot of trees. These aren’t of particularly high quality, for fairly obvious reasons, and while this isn’t normally a huge issue it’s already started to get a little distracting simply because they’re everywhere. I don’t really blame Watch Dogs 2 for this because rendering those at high quality would likely devour my GPU (and I would also guess it’s entirely possible if I really want to fiddle with the settings), but it’s something worthy of note if you’re on a lower-spec machine.

The other is screen tearing, which is pretty abundant in places. I actually haven’t encountered this a great deal in the game itself, especially with VSync turned on, but it’s rampant in the cutscenes. I think this is due to the fact that the cutscenes appear to be rendered at 30 FPS but the display itself is uncapped; FRAPS was showing the cutscenes running at around 170 FPS. I’ve since capped the game’s refresh rate to 60, but unfortunately I think I’m also a little while of play away from my next cutscene and I’m writing this with one hour to go before the game launches, so I can’t judge whether this will work or not. As long as it doesn’t impact the actual play, I can live with it.

There’s also a third thing, which I don’t really want to poke at but I will anyway: some of the environmental textures are a little muddy. Again, this is probably more down to the fact that I’m not running the game in Ultra with everything turned up to maximum. It looks lovely, anyway, but don’t expect razor sharpness on every poster on every wall. 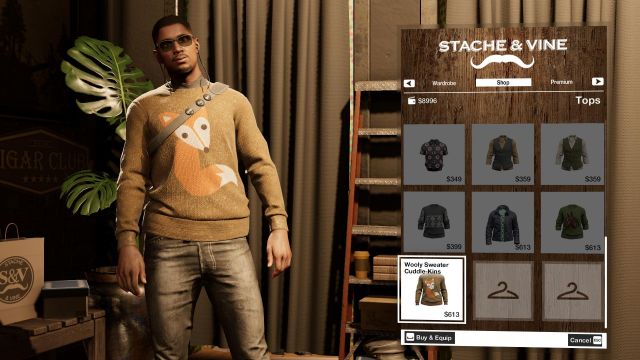 If they actually put that top on sale I will buy it. I don’t know that I’d ever wear it – I’m not sure I could pull off a woolen sweater – but I would buy it.

It looks good and runs well, but the other important aspect of any PC version is inevitably how it controls. Here, too, a fair bit of work has clearly been done to make Watch Dogs 2 PC-ready.

First off, pretty much everything works fine with mouse and keyboard. If you tap Tab to bring up your in-game smartphone, you can easily navigate it with the mouse while still walking around with WASD; while I haven’t seen how it works on console, I’d argue that being able to just click a little heart to favourite a song is considerably easier than any option based on a D-pad or analogue stick. Considering this is very much the heart of the game (it’s where you access all missions and your map, for one thing) making this – and the map itself! – work flawlessly with the mouse is a big deal.

The equipment wheel has been replaced with a grid, and that aside, most equipment can also be accessed with the tap of a key. Aiming and shooting feels “right”, and I’m told that the camera and animations have been adjusted to compensate for this – and, yes, the mouse sensitivity is independent from the framerate. 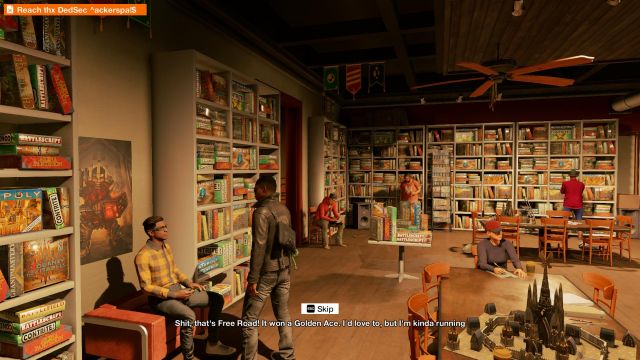 I’m also kind of amused that the secret hacker base is directly below a tabletop games store.

This goes for driving, too. Driving takes note of how long you hold down a key and uses this to essentially turn your digital keypress into an analogue movement… although you can disable this feature if you so desire. Oh, and just about everything – from aiming to sprinting – can be individually set to either toggle on/off with a tap, or to require you to hold the button down. In short: really good stuff.

So, some quick thoughts on the game itself. It’s actually a lot more entertaining than I thought.

I’ve only done the first couple of missions and explored a little of the open world, but Watch Dogs 2 has a definite sense of humour about it, and feels a lot more focused on “fun” than anything else. It’s not Saints Row or anything, but the driving is incredibly arcade-y, the shooting precise, and the dialogue endearingly silly. One of the first missions involved a pharmaceutical CEO trying to buy the sole copy of a rap album and deny it to the public, which might ring a few bells if you’ve heard of Martin Shkreli’s attempts to buy The Life of Pablo. 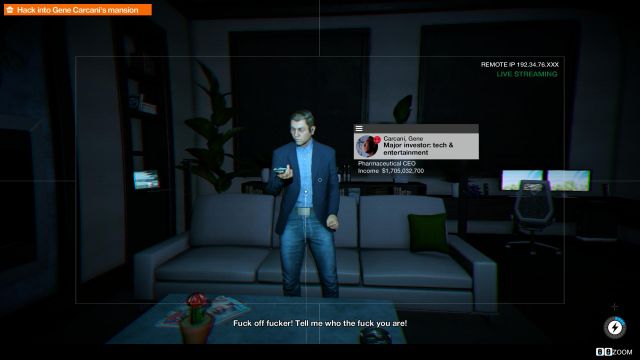 I mean, this is a more entertaining use of hacking than what most of the original Watch Dogs allowed.

It’s also typical Ubisoft in that there are a billion things to do, most of which earn you Followers or Research Points, which unlock new items, abilities, and missions. I can barely drive 20 metres down the street without spotting something new, whether it’s a high-up node that needs to be hacked to get a research point, or simply a shop with some fancy new clothes.

What I haven’t done is played enough to determine whether it’ll get old incredibly quickly or if its numerous, interlinked, seemingly in-depth systems will stand up to a lengthy campaign, but I’ll hopefully have a better idea of that later this week. Nonetheless, Watch Dogs 2 appears to be a game that deserves to be described as a “PC version” rather than a “port”, and I’m really rather happy with that.

Oh! And, most important of all: you can actually watch dogs. 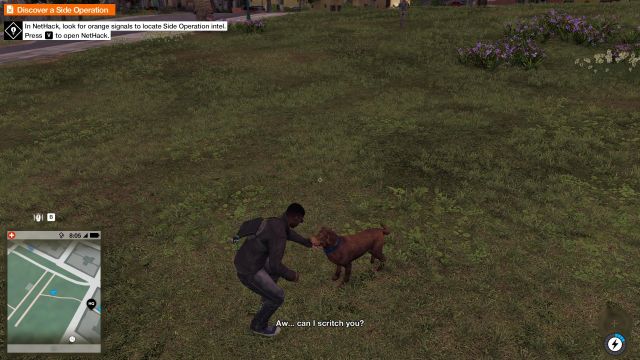 Finally, a game that actually lives up to its name.