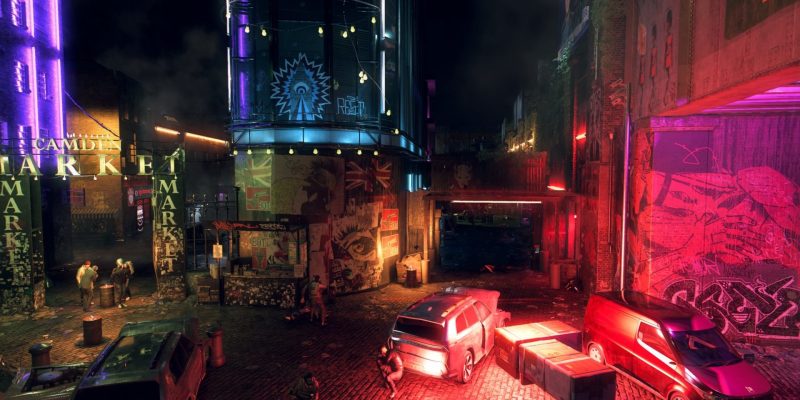 By the time you read this, Watch Dogs: Legion is either out or it’s about to be, and this is the perfect time to look at just how it holds up on a technical level. 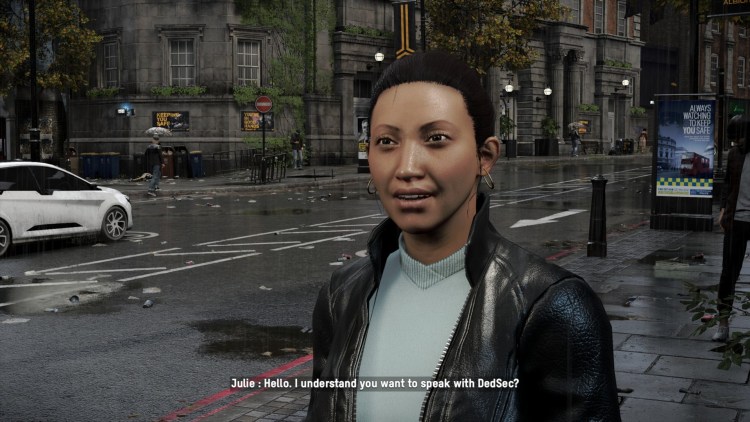 No RTX here. You’ll have to wait a bit for the shiny screens.

So my PC is very good, but not bleeding edge with a 3080 or anything. I’m sitting close to the “Very High with Ray Tracing” recommendations for Watch Dogs: Legion. This is important, because we’re going to be looking at how this performs on my machine with RTX on. We’re also going to be looking at vastly higher settings, and seeing just how badly they stagger my poor PC.

Watch Dogs: Legion has a delightful variety of tweakables, which I’m always happy to see. Let’s have a looksee at the graphic options: 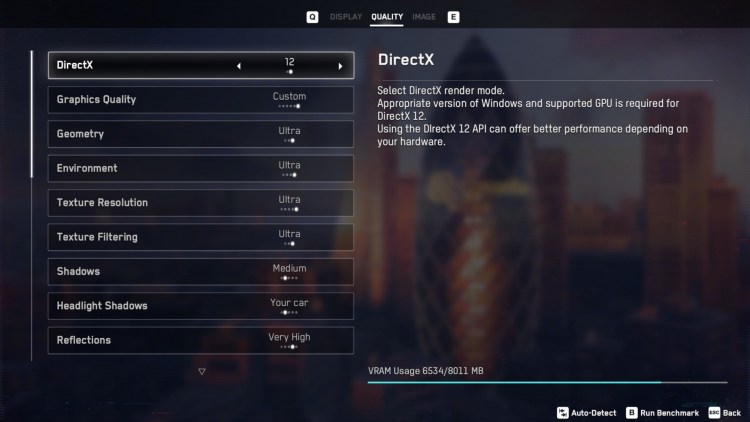 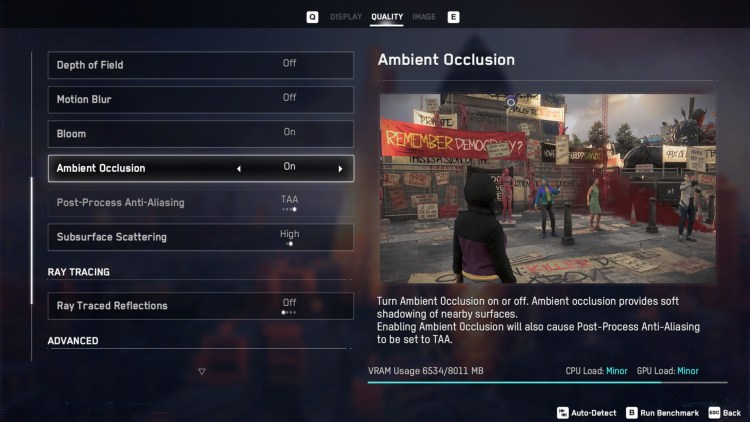 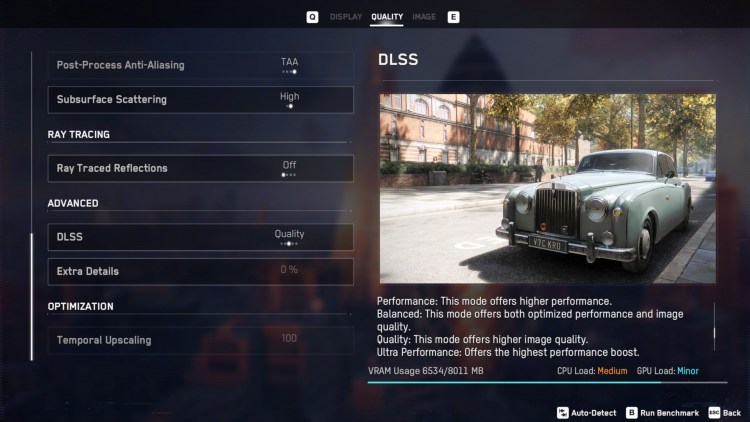 So yep, there’s a lot in there. Excellently, Watch Dogs: Legion’s options give a nice visual indicator of the changes, as well as giving an idea of the impact they’ll have on performance by showing you how power-hungry those settings are on both your CPU and GPU, and your total VRAM load.

I’m not going to go through all of the other options, but the usual suspects are in there. FOV can be adjusted, there’s a multi-monitor setup, you can change your reticle. You can turn on or off all sorts of HUD elements, including the inevitable Ubisoft hints that pop up bloody everywhere.

I do want to talk a little bit about Watch Dogs: Legion‘s control bindings, though, because there’s a nifty little feature there. Besides being able to rebind practically everything (going as far as rebinding the keys in the football trick minigame), there’s a nice “virtual keyboard” where you can see exactly what keys are used in what mode, and what every key does. It’s a minor thing, but it’s lovely. 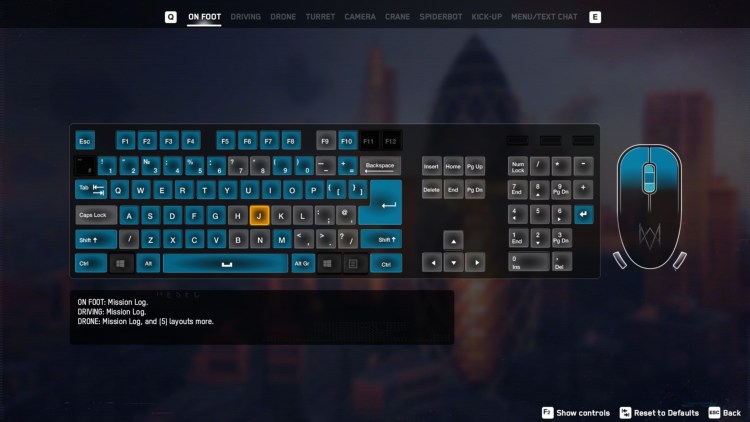 I know it’s minor, but I love being able to see what keys are used both in any given “mode”, and in general.

But I suspect the things you’re really interested in are “how does it run” and “how does it look”. Let’s talk about the performance of Watch Dogs: Legion first.

We’re going to use the built-in benchmark mode for this (and yes, I’m going to gush loudly about that shortly), and we’re going to test a variety of the higher settings. I’m not going to do a hard benchmark of the lower-end settings, but we are going to take a good look at how hard this pushes my system.

First off, let’s look at how things go with literally every setting that isn’t RTX or DLSS-related on full. This is actually above the Ultra preset, although the only real change is that more cars have headlight shadows. 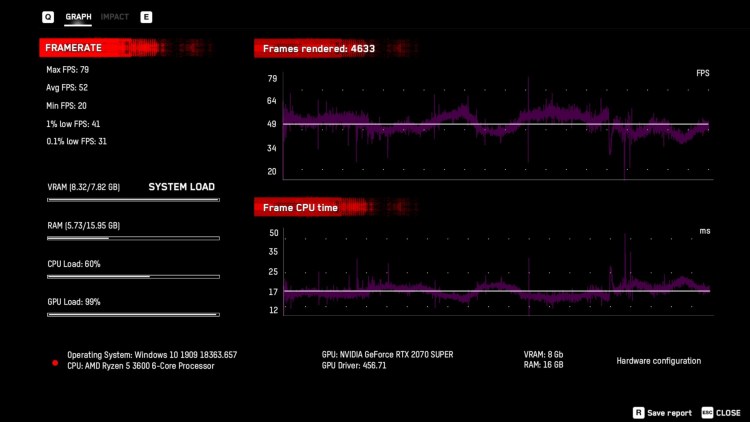 But the real cool shit is in the Impact screen. 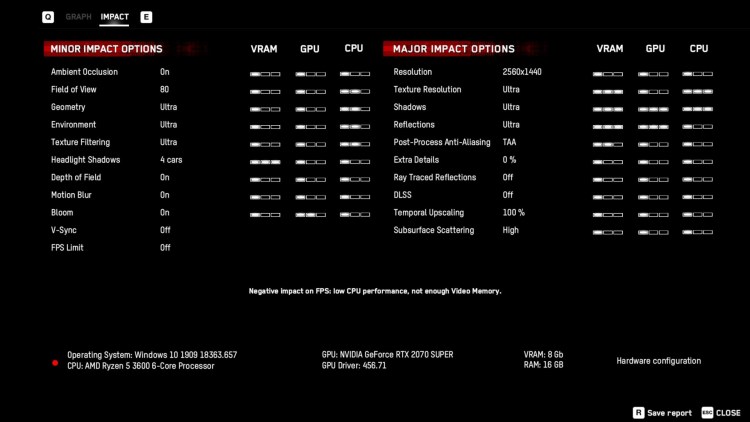 This screen not only reminds you which of Watch Dogs: Legion‘s settings you have on, but shows the rough impact of those settings on your VRAM, GPU, and CPU. It also indicates where the bottlenecks were during that benchmark. While it’s not the most detailed thing, it’s tremendously useful for fine-tuning your settings. Looking at this, for instance, I know that I need to dial down the CPU-heavy and VRAM-heavy settings. So Texture Resolution would be a good bet, while Reflections would only help fix one of those problems. This is genuinely one of the best in-game benchmark tools I’ve ever seen.

I ran nine benchmarks with various settings. Here are the results for the first seven:

The takeaways from this are pretty striking. Most notably, there’s a gargantuan performance improvement from using DLSS in basically any form. Watch Dogs: Legion actually has four settings for DLSS — Quality, Performance, Balanced, and Ultra Performance, the latter of which is aimed at 8K(!). For the most part I tended towards Quality and Balanced, but honestly, it looks great regardless. 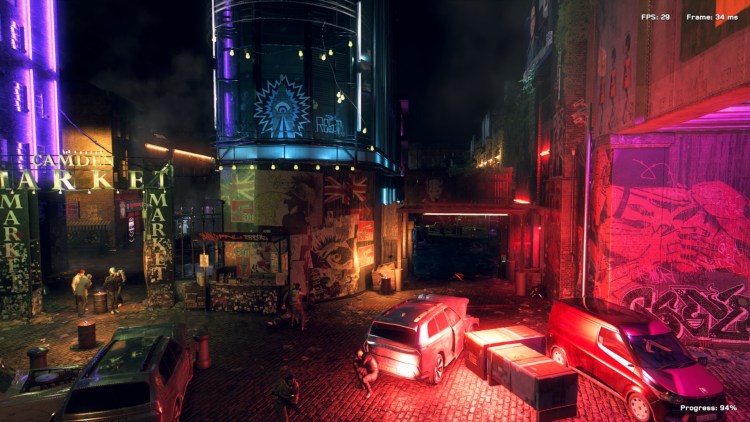 The other takeaway is that even on this machine, which is below the recommended threshold for RTX, it’s perfectly playable and rarely drops below 45 FPS. And if you’re running at a lower resolution like 1080p, you’d likely get vastly better performance out of Watch Dogs: Legion. Bear in mind that pushing everything to ultra actually exceeds my VRAM, too.

That said, it’s worth noting that the benchmark doesn’t quite push the game to its chaotic limits. The benchmark takes place in a small bit of Camden Market, which has a lot of neon lights and gunfire and explosions, but it’s not quite as taxing as the same happening on a busy street with a few dozen cars.

For the final bit of benchmarking, I decided I’d push the settings to their absolute limits. Everything at the absolute highest settings, with RTX on ultra. 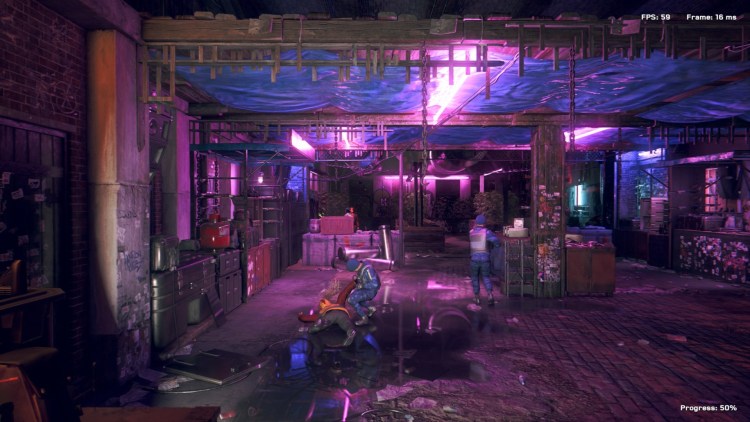 With DLSS off, this was… problematic. The average FPS here was 27, with it routinely dropping down to the 10s. Putting DLSS on Balanced (not Performance, even) made this better, with an average of 46 FPS, and it rarely dropped below 35. And again, this is way above the settings I should even be attempting.

So that’s how it runs, but how does it look? Well, most of the screenshots dotted around our review and guides are with RTX off, but they give a pretty good impression of the general look of the game. In short, it’s quite lovely, though the hair is a bit iffy and the grey and brown buildings don’t often show Watch Dogs: Legion‘s graphics to their fullest. But let’s have a look at some comparison shots.

Direct comparison shots are tough because of the randomized nature of what’s going on in the world, but I’ve done my best. Here we’re looking at the absolute lowest settings possible, as well as the Ultra preset with RTX on Ultra and DLSS on Balanced. The only things I turned off were motion blur and depth of field because they are the enemies of both screenshots and anyone with a functional pair of eyes. 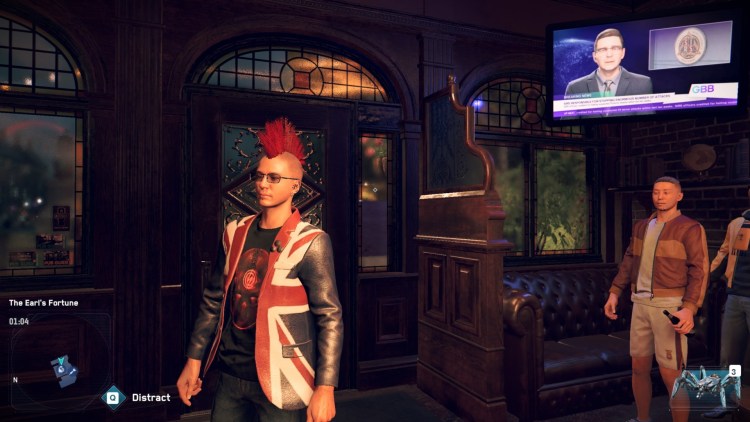 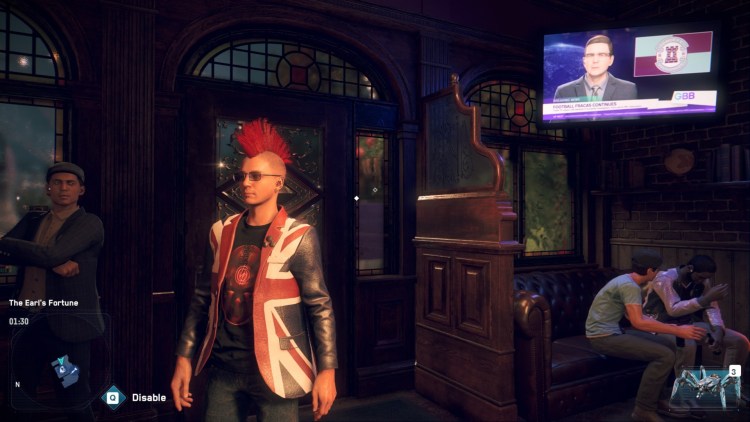 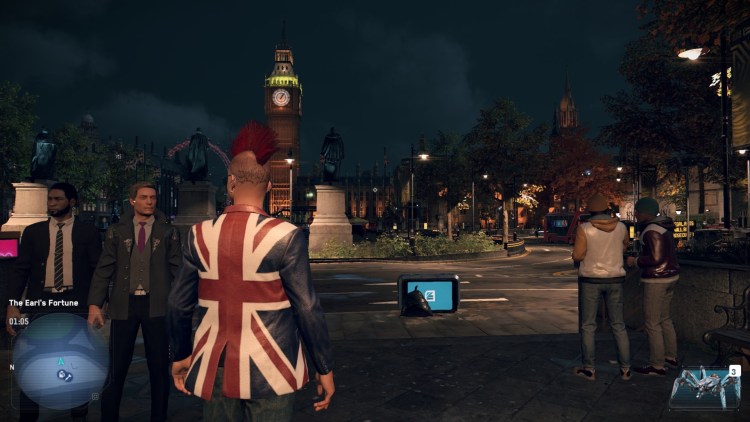 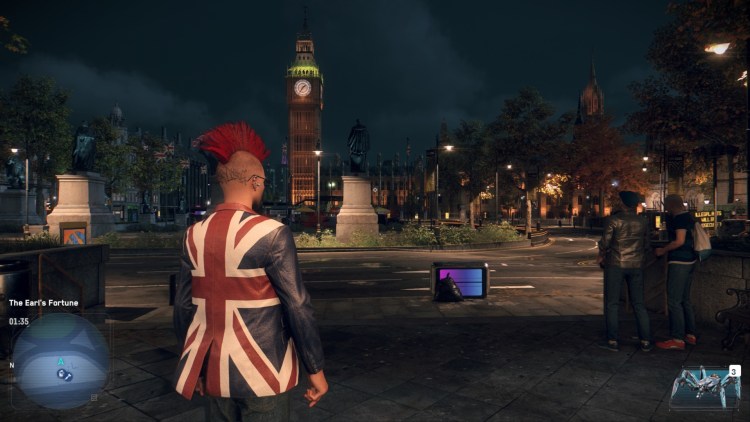 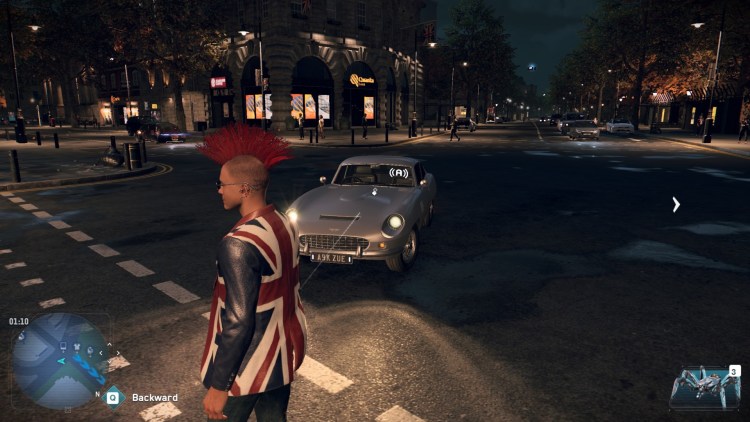 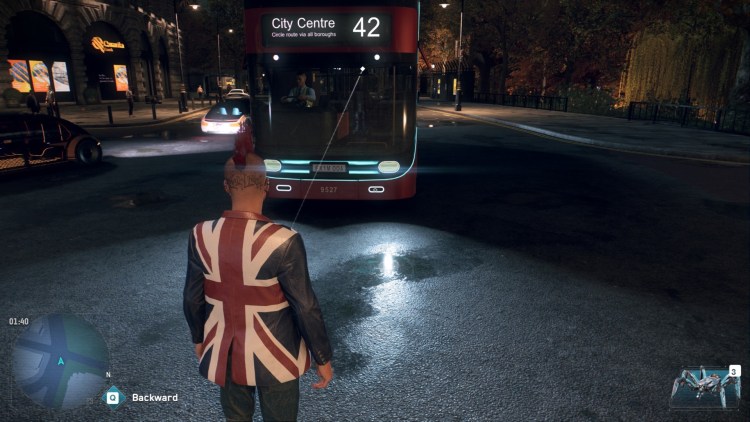 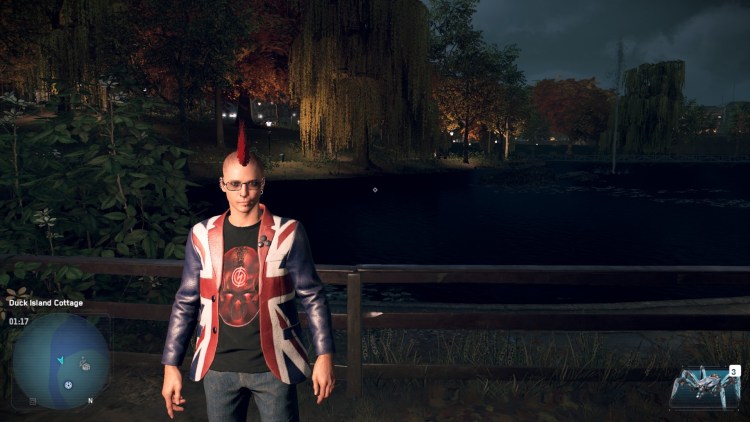 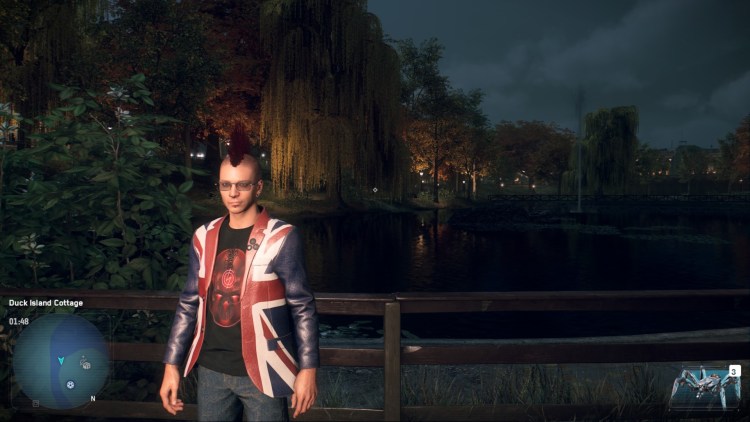 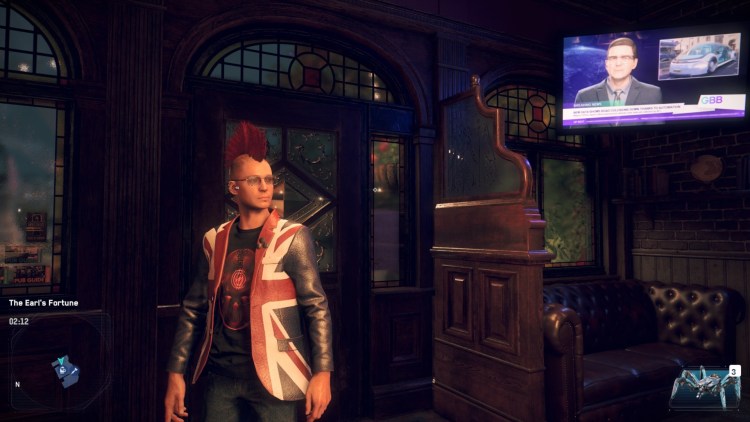 Ultra, DLSS off. The hair doesn’t look great either way, and is easily the weakest part of the graphics. 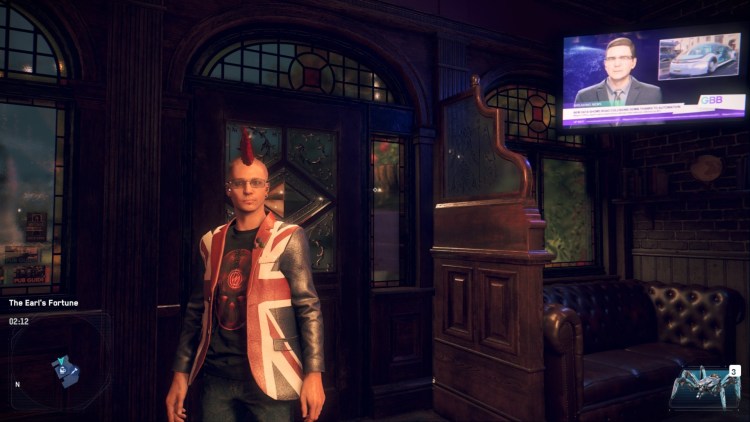 Ultra, DLSS on Balanced. A little softened (or blurrier), but that’s much easier to see in a still shot. It’s fairly hard to tell in motion.

Glitch in the matrix

Finally, we need to talk about bugs and crashes. Normally I can only talk about my own experience, which is that — barring one recruitment mission being a bit broken, occasional invisible enemies, and civilians occasionally walking into walls — it’s been pretty solid. Crashes were rare, and mostly occurred either when I’d either bumped up the settings to more than my computer could handle or when I had other things running in the background. My only other big issue is Watch Dogs: Legion taking a long time before giving me control back when I quit out to the main menu.

But this is not the experience of many others, from what I can gather. Our own Andrew Farrell has been having pretty regular crashes during cutscenes, and I’ve seen others with early access to the game suffering crashes in menus or when accessing the map. The plus side is that Watch Dogs: Legion autosaves regularly, but that’s not really much of a plus side. 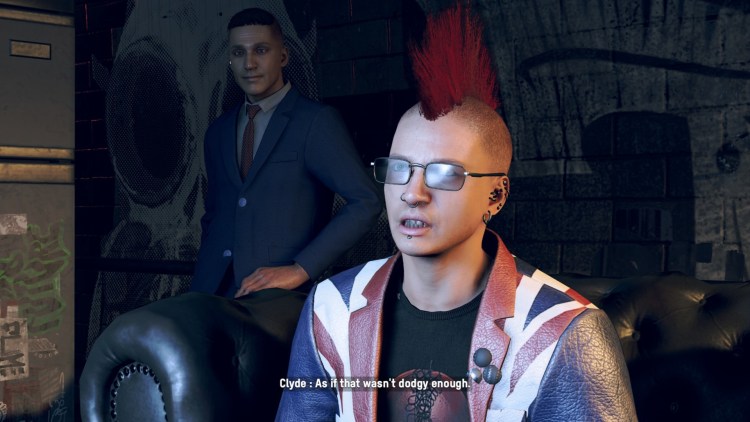 Clyde has it right.

I’ve heard through the grapevine that there’s a fairly sizeable patch coming, but I’m not entirely sure if that’s a PC patch, console, or both. I’m also not sure how long that’s going to take. So, to some extent, buyer beware.

Mostly, my thoughts are that Watch Dogs: Legion is a smashing success of a PC version. It’s got all the options I could ask for and more,  one of the most useful in-game benchmarks I’ve ever seen, it controls wonderfully on mouse and keyboard, and it has a fantastic implementation of both ray-traced reflections and DLSS. It’s a whopper of a PC version that performs far better on my rig than it really should, even when pushed to its absolute limits. Now, if only it weren’t for those crashes…