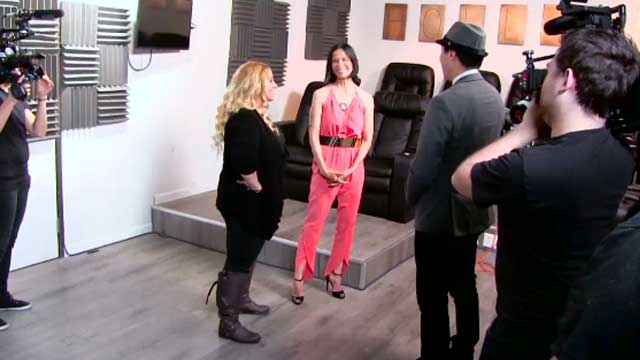 A few months ago we reported that CIG would be taking part in a reality TV for Star Citizen Squadron 42 casting for a show called Cast Me on channel Myx TV. The episode has now aired.

Most of you will probably never have heard of the channel MyxTV or the show Cast Me, but in the episode called “Video Games & Cheerleading Dames”, CIG’s Sandi Gardiner drops into the DK Casting office where they have to pitch for the business. I say “pitch”, but according to the show, she was friends with Ajay Rochester who is one of the hosts.

The show is centered around casting for a Squadron 42 character, space engineer petty officer Ford.

In the show, DK Casting co-owners David Kang is very keen for the business stating they are,  “paying us a really good amount of money for this”. This is followed by a visit to the prop store to pick up some dodgy looking props for the casting session.

The casting begins and it’s amusing to watch, I say amusing, it’s quite tragic really. The poor guy trying to do it in Chinese thought he “nailed it”, the guy from Alabama is a disaster, but the guy doing a Sharon Osborne impression might be perfect for the part as Sharon Osborne.

In the end it comes down to three female actors and the show concludes with the chosen actor in the mo-cap studio taking on the Star Citizen Squadron 42 role. The show is typical reality TV fare but it does show the process the actor had to go through to get the part for Squadron 42.

You can watch the full episode, but you’ll probably end up skipping through a lot of it as there’s also a the cheerleader sections in this particular episode.

Tales of Berseria coming to the PC in January