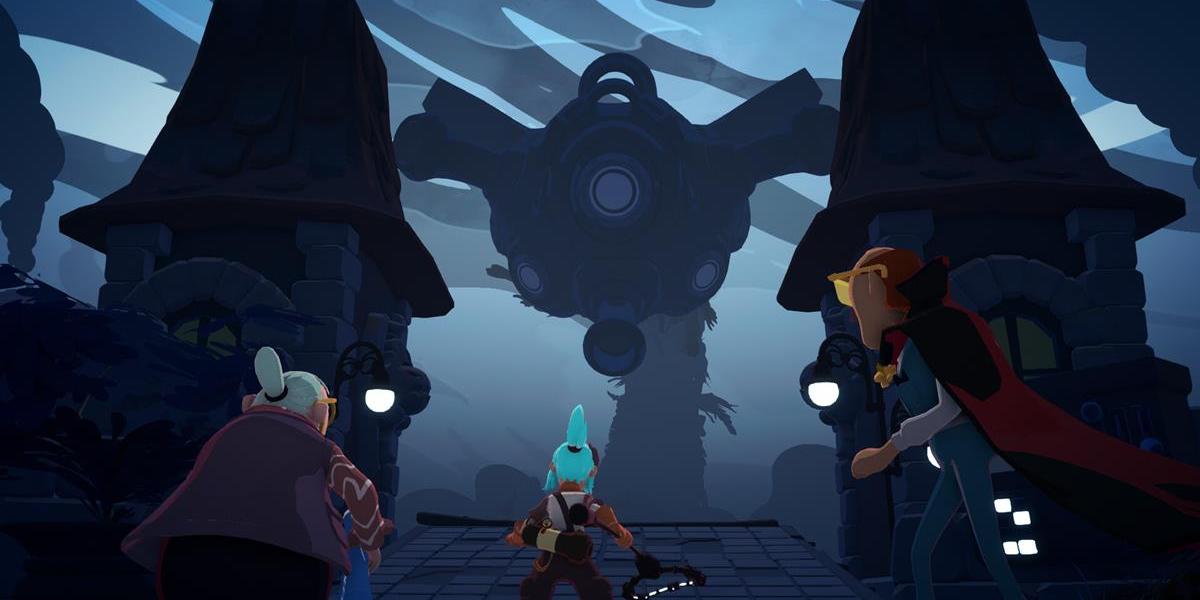 Wavetale appears to be the final casualty of Stadia’s exclusivity deals. The game initially released on that platform a year ago, but the exclusivity window has ended and now people can play it. However, history has shown us that it’s quite difficult to get much attention after being locked away. Which is a shame, because Wavetale is a worthwhile experience. It’s very short and fairly one-note, but the visuals, world, story, and gameplay are all lovely, making for a pleasant way to spend four hours or so.

The game’s cutscenes are fully voiced by a talented cast that does a wonderful job of bringing the characters of Wavetale to life. Sigrid lives on a lighthouse island with her grandmother, Doris. Her home, Strandville, is overrun with this black muck known as Gloom, which was spread into Sigrid’s homeland by people she knows as the Dirty Paws. But when the Gloom worsens and the Dirty Paws show back up, she sets out on an adventure to finally make right what the generations before her failed to do for so many years. The story has a strong environmental focus, which is effective if a bit heavy-handed.

I wasn’t expecting to like the narrative as much as I did, but Wavetale tells an emotionally resonant story in a fairly short amount of time. The ending itself had me choking up a bit, too. The game’s visual style is lovely, from the unique character designs to the beauty of the water spread out before Sigrid. Early in the game, Sigrid meets a shadow that dwells in the water. It mirrors her movements, putting its feet under the surface for her to stand on, which allows her to walk and glide across the water. It’s beautiful, ingenious, and mesmerizing. 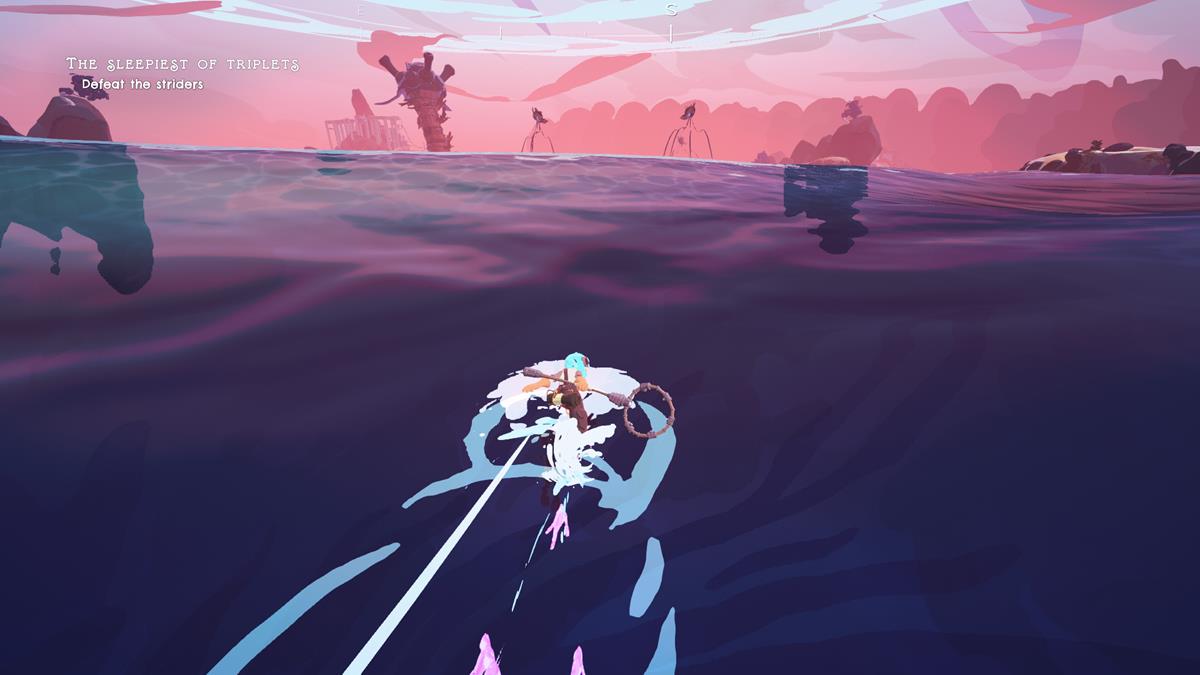 The way we were

Wavetale has an interconnected world divided into a few areas. You’ll take to the water to get around and this method of travel is the best thing the game has to offer. I was floored by it at first and it continued to feel great throughout the entire experience. But the game’s tasks are fairly repetitive. You’ll mostly follow markers leading to characters you need to speak with, gathering blue things called sparks, or hitting switches.

Despite seemingly being a normal teenager with a net, Sigrid is ridiculously mobile. She can spin the net in the air to hover, as well as dash. Dashing while in mid air greatly increases the speed at which she hovers, too. It all feels wonderful. She can double jump as well, which makes the platforming feel very accurate. There’s a fair amount of platforming and it all felt pleasing to me, even if some of the collision detection on geometry can be a bit wonky. But you can use this to reach places in ways you’re not meant to, so it’s not all bad.

Sigrid also uses the net to hit Gloom creatures with either a short combo or a spin attack that all feel a bit delayed and semi-responsive. The combat feels like an afterthought and I hated how the camera moved overhead so often during encounters, which makes it harder to see.

But this combat is infrequent and very easy, so it isn’t much of a bother. There’s a fairly underwhelming boss fight at the end of the game, but you’ll mostly just be fighting a small handful of enemies. One of these moves across the water, requiring Sigrid to use her net to pull herself up to them and hit them in the face. You’ll also use this net to reach high-up platforms and throw yourself into these objects that rocket her forward as if they were springs in a Sonic game. Getting around is mostly a joy. 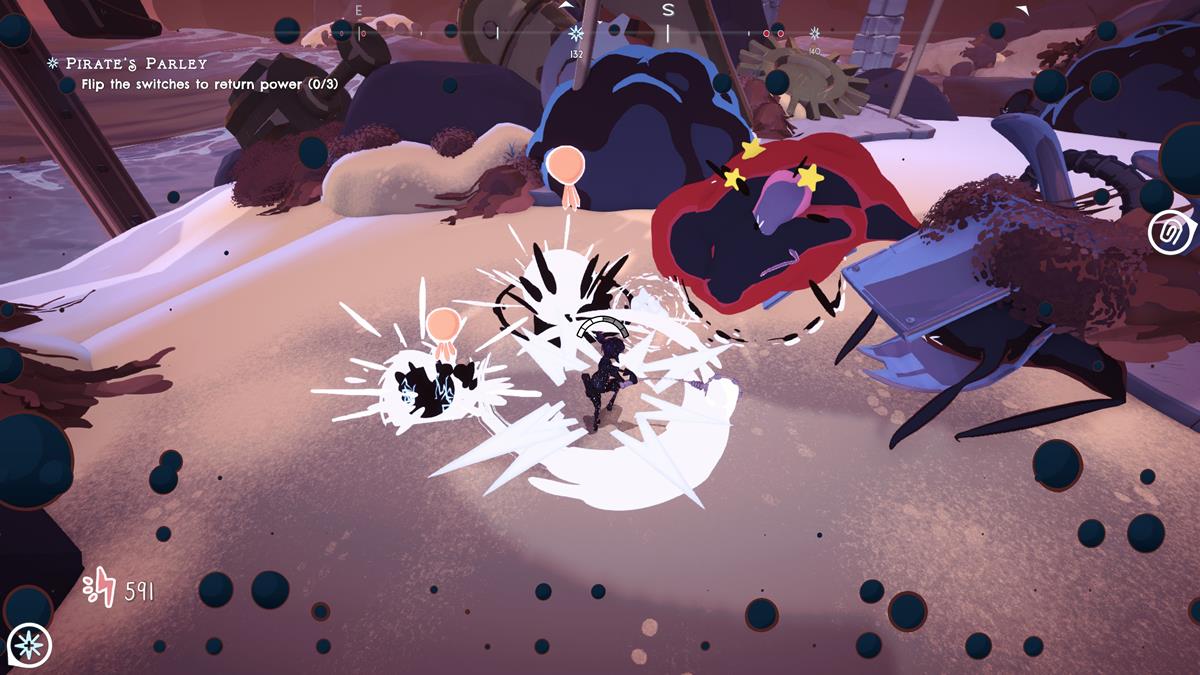 But the issue is that, once you get past the introduction, Wavetale doesn’t really offer anything to change up the way you play. You just use the same abilities to platform and hit switches, which makes the game feel very samey. It coasts along on the strength of its narrative, not on its gameplay. If you don’t do side stuff, you can easily finish the game in four hours. Quite possibly less, really. But the wondrous visuals, enchanting story, and the tranquil nature of the game’s ocean travel do make this an experience worth having as long as you know what to expect.

Wavetale is only four hours long and can be too one-note for its own good, but a captivating world and resonant story make it worth playing all the same.

By Jason Rodriguez17 hours ago
Reviews